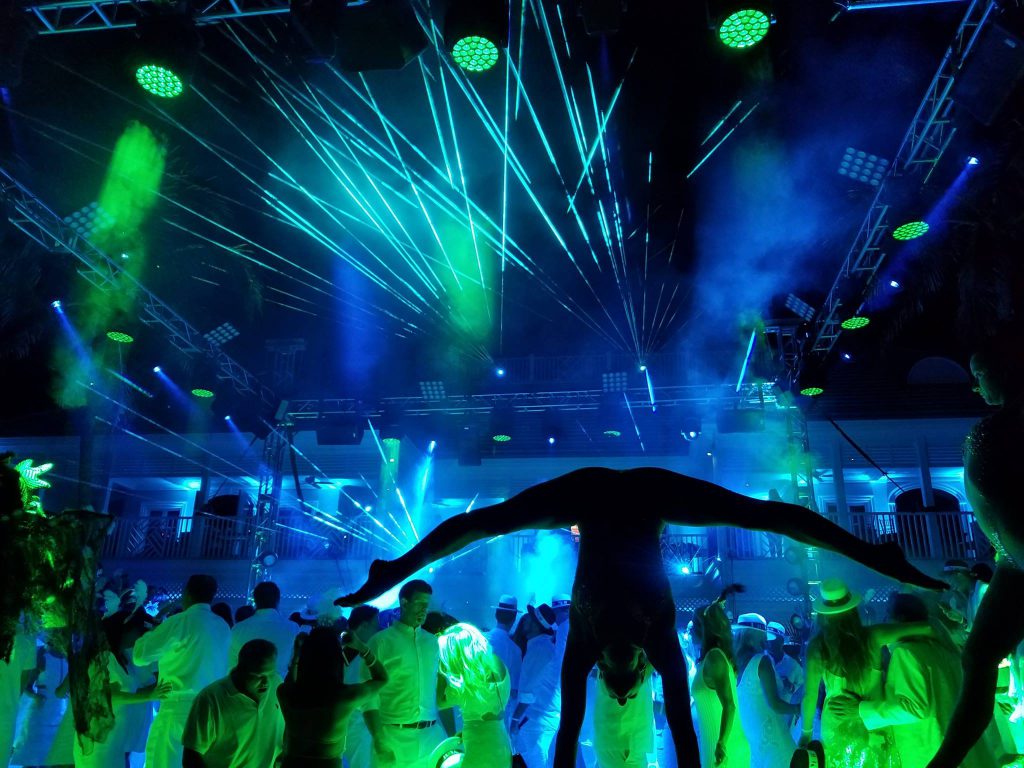 NASSAU, BAHAMAS – While an estimated one million people crowded into Times Square on New Year’s Eve to watch the famous ball drop, a far smaller crowd was gathering 1,102 miles away, under much balmier conditions, for another NYE tradition. The ringing in of the New Year is as eagerly anticipated at Albany Resort, a 600-acre upscale island paradise (poolside condos go for $6,000 a night), as it is in the heart of the Big Apple.

Every New Year’s Eve, organizers of this paradisal resort’s “Albany White” party (named after the white outfits that guests wear) try to outdo their previous year’s celebration. December 31, 2017, was no exception, with 50 different performers, including DJ Ignite, providing entertainment and a gourmet dinner worthy of a world-class restaurant. The center of attention for much of the evening was the Las Vegas-style dancefloor that was created right there on a beautiful white sandy beach with help from over 300 CHAUVET Professional fixtures, supplied by Spectrum Light & Sound.

“Albany Resort in the Bahamas has set a goal to put on one of the greatest New Year’s Eve parties in the world, and it commits to raising the bar each year,” said Spectrum Light & Sound’s Paul Francis Aranha. “The main objective of our team was to create the best and most realistic dancefloor possible in a beach environment. Our lighting designers Matt Mills and Shawn Sithel, assisted by Max Ferreyra, did an excellent job helping us meet this goal.”

Key to the success of the NYE design were the 12 Maverick MK1 Hybrid and six Rogue RH1 Hybrid fixtures in the Albany White rig. The Maverick units were hung from truss structures over the dancefloor, while the Rogue fixtures were positioned on the second floor of the “Albany House” building across the beach. Working in tandem, the two Hybrids created intersecting beam and spot effects that conjured up late-night dance club images.

“We fell in love with the RH1 when we first started to use it, because it gave us a dynamic range between the beams and spots,” said Aranha “Then, when the MK1 was released, we recognized that its greater brightness and effects opened even more opportunities for us from a design standpoint. This was very useful to us on New Year’s Eve. Hitting the dancefloor with this level of brightness allowed us to create a genuine club atmosphere, not just something that looked like a temporary dancefloor.”

Also infusing the dancefloor with extra energy were the 12 Maverick MK3 Wash fixtures in the event rig. The RGBW moving fixture, which is powered by 27 40-watt Osram RGBW LEDs, was instrumental in changing the atmosphere at the event as it transitioned from an elegant dining atmosphere to a pulsating nightclub vibe.

“Shawn Sithel and I both felt strongly about incorporating more wash fixtures into our design this year,” said Aranha. “A wash can go from giving us nice soft colors for dinner to saturating the area with bold looks during the party. The MK3 wash was the logical choice for us, because the pixel mapping allowed us to create an interesting array of effects while controlling the level of brightness. The zoom function also gave us some strong effects when combined with the Hybrids and the atmospherics from our three Amhaze Stadium foggers.”

Pumping up the crowd with bright light from the Maverick and Rogue Hybrid fixtures was one thing, but Aranha and Sithel didn’t want to take away from the breathtaking sky views that the island offers. This is why they decided to leave the area above the dancefloor open.

“Last year we created a ‘ceiling’ of sorts over the dancefloor,” said Aranha. “However, Shawn and I spent a lot of time looking at the environment that we wanted to create, so we opted to keep the space immediately above the dancefloor clear and allow people to enjoy the beautiful Bahamian night sky.”

At the same time, however, Aranha and Sithel didn’t want to stray far from the party atmosphere they created with their moving fixtures. With this in mind, they surrounded the dancefloor with vibrant light from 12 STRIKE 1 multi formatted fixtures, which they used as warm white washes and blinders; 16 Nexus 4×4 panels; and a massive collection of pixel mapped ÉPIX Strips and Bars. For added color, they positioned 54 COLORado 1 Solo fixtures and 148 CHAUVET DJ Freedom Par Quad-4 IPs throughout the event area.

Given that the Albany White celebration took place on a beach in the middle of a chic resort, setting up the elaborate dining and nightclub rig was not without its special issues. “We had a very short window to set and strike the event, since it’s at a resort,” said Aranha. “Also, since it’s held on a sandy beach, everything takes a bit longer, because nothing can be rolled to its spot – but when you look around at this beautiful setting, you know that the challenges are well worth the effort.” 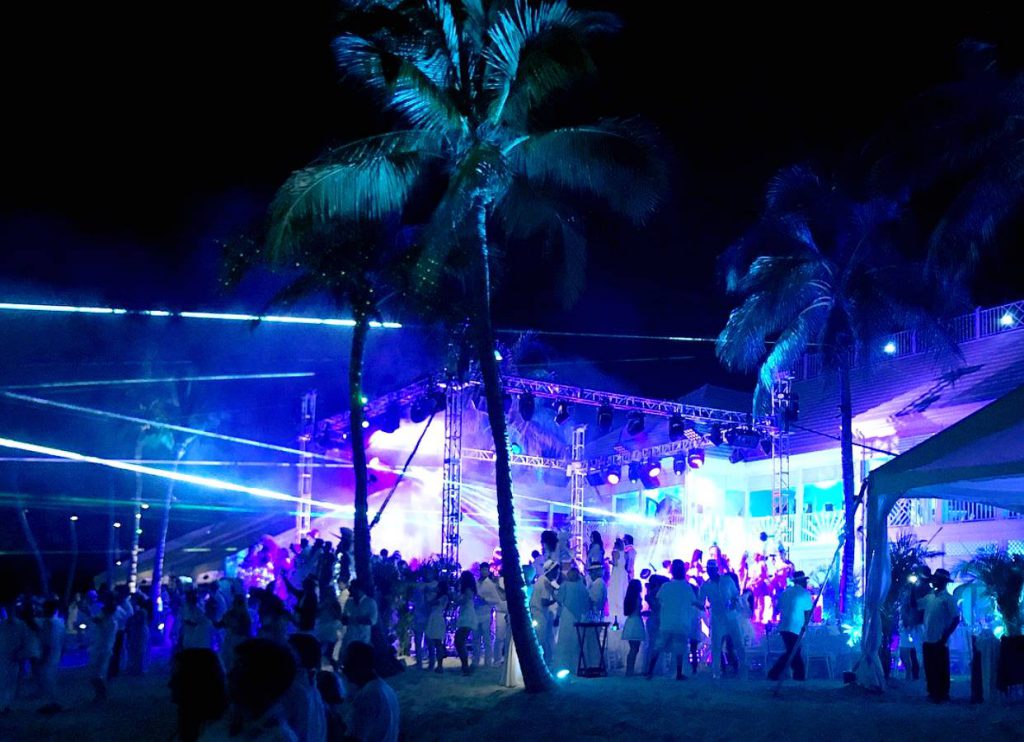