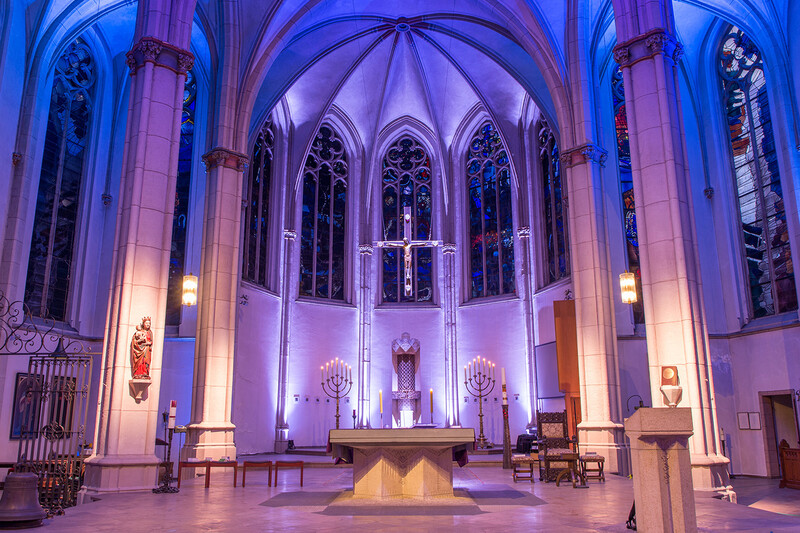 GELSENKIRCHEN, GERMANY – With its green copper capped spire reaching 75 meters toward the sky, Saint Hippolytus Church stands high above the houses, shops and modern, small industrial buildings that surround it. Those who step inside the impressive neo-Gothic structure encounter an interior that rivals its exterior in splendor. From the beauty of its colorful “Praise the Space” choir windows, to its towering yoked ceiling and cantoned pillars, the space inside the historic 650-seat church is at turns imposing and reassuring.

Accentuating the transformative effect of the church’s timeless architectural features is a new LED lighting system featuring CHAUVET Professional fixtures that were installed by Lambda Light and Media Design.

“We had already done some projects for services and celebrations at Saint Hippolytus, so the church was familiar with our work,” said Markus Lipphaus of Lambda. “There was an understanding, that the old lighting system needed to be replaced. LED fixtures were the logical choice, especially considering the energy savings.”

Lipphaus and the Lambda team had clear goals in mind for the upgrade project at the church, which was built in 1898. “This is an official landmark, so for us, it was important to highlight the great architecture,” he said. “I had the idea of indirectly lighting the ceiling, which was already pure white, and therefore perfect for this type of illumination angle.

“Next, we wanted to highlight very particular spots, like the side of the church with the huge windows,” continued Lipphaus. “Also, the middle pillars are great for uplighting. With the NET-X II, we were able to program different scenes for the different services very easily. For concerts or other events, we are able to control and change everything easily via sACN. This enables very different types of lighting effects.” 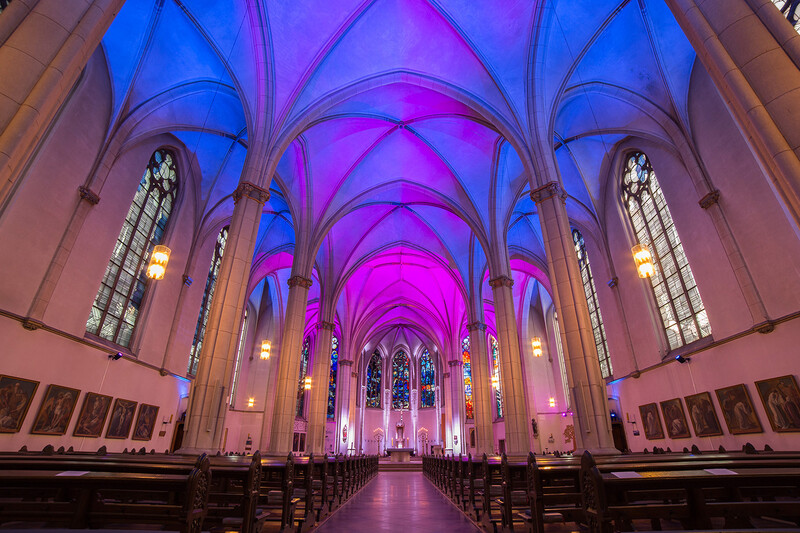 “We are able to rely on the COLORado fixtures’ zoom wherever needed in the main hall to achieve the right color balance,” said Lipphaus. “In some spots, the beam angle perfectly matches the gaps in the wall, so I selected the Quads rather than Solo because of cost.”

Some of the COLORado Solo fixtures were also used with a pair of Ovation C-805FC units to uplight the church’s majestic pillars and other impressive features, including its organ. At the entrance area, Lipphaus mounted 10 Ovation FTD-55WW warm white Fresnel units with barn doors.

“The Fresnels create a very nice impression, illuminating the entire entrance area in a bright light,” said Lipphaus. “With the barn doors and the zoom, I was able to set some highlights while other sections of wall were left out of the highlighting, as they were not as nice looking due to their age.

“From a lighting perspective, an old church is different in many ways,” continued Lipphaus. “The old structure requires a lot of thinking ahead, as well as a secure installation. The electric situation had to be analysed by an electrician first and some details had to be renovated in order to support LED lighting. With the church’s impressive structure, the fixtures had to be very subtle; you don’t want the lighting system to pop in the eyes on first sight. The fixtures needed to be very quiet, but still had to be IP65 rated, because of them being placed in a moist and old structure.”

These were challenges to be sure — but by meeting all requirements and expectations, the Lambda team enhanced an interior vista that is timeless in its beauty and inspiring in its effect.