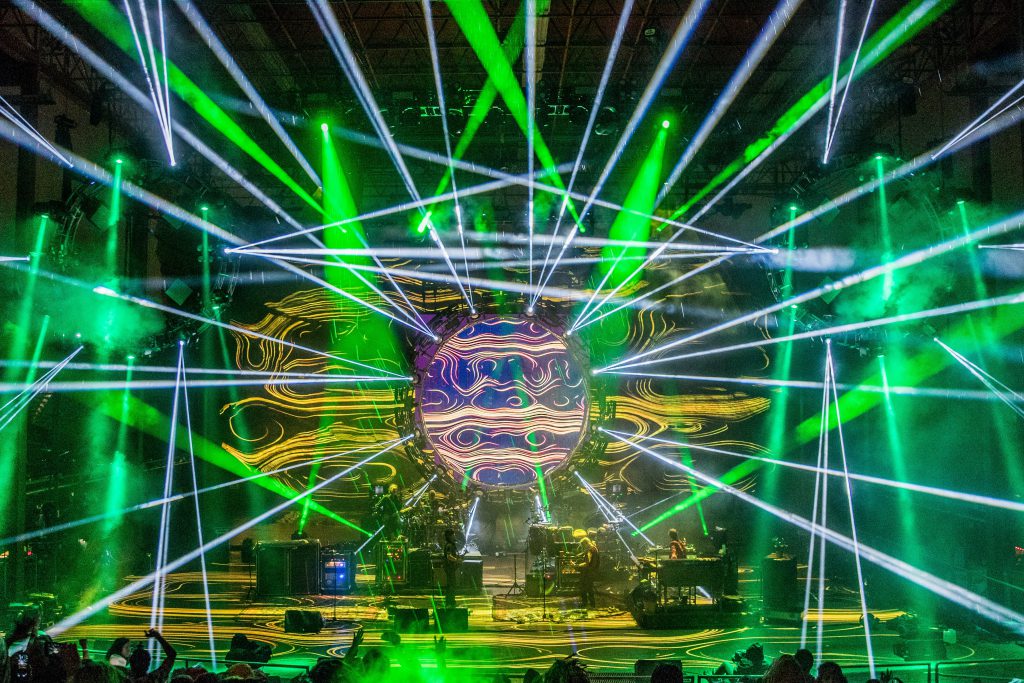 The connection between bands and their lighting designers has never been tighter. More and more it seems that LDs are becoming a virtual part of the band. Delving deep into the emotional and creative forces that drive every good song, they translate sounds to sights, playing a lighting console the way their compadres play musical instruments. From time to time, we like to recognize these designers with a column we call “I’m With The Band.”

In this issue, we’re featuring Andrew Cass, the lighting designer for The String Cheese Incident (SCI). A music industry major in college, Cass hooked up with the iconic jam band when he got an internship at their record label. Striking out on his own after graduation, he toured with various other bands for seven years before returning home to SCI as their LD a little over three years ago.

He and SCI have been on a roll ever since, appearing at major music venues and festivals from Red Rocks to Electric Forrest. While the band has wowed crowds with their free-flowing eclectic musical mix that pulls in rock, bluegrass, calypso, reggae and other genres, their LD-collaborator has been supporting their varied sounds with equally diverse lightshows that manage to be powerfully theatrical, yet warm and inviting at the same time. We caught up with the LD during his frequent travels to ask him about life with one of the most successful and influential jam bands.

SCI jams with the best of them, taking off with impromptu riffs that go in refreshingly original and sometimes unexpected directions. As a lighting designer, you must have to punt a lot with a band like this. How much of your show is busking?
“Surprisingly, this is not the case. Actually, much less of my show is punted then most LDs in this genre. I have about 120 songs cue stacked and generally within those stacks there is a jam in the middle somewhere. I have built my show so that I can busk away from the song structure during the jams and then return back to the looks on the song as smoothly as possible.”

How has being with SCI influenced you creatively as a designer?
“Going back to the previous question, working with SCI has really made me a better cue stacker than a better busker. Deciding what programming to make in advance and put into the cue stacks and what to leave to busking was an eye-opening process.”

Can you tell us about when and how you hooked up with SCI?
“My first involvement with SCI came when I was in college at Northeastern University and became an intern with SCI Fidelity, String Cheese Incident’s independent record label. I was majoring in music business at the time. I was also interested in lighting and did some work with local bands. After graduation, I toured as an LD with various bands. Then after about seven years, I hooked up with SCI again and became their lighting designer.”

In a way being with SCI must be like being with a number of different bands, since they’re comfortable playing so many different genres. Do you approach lighting differently depending on the genre they’re focused on at a particular show?
“Absolutely. The bluegrass songs tend to focus on key lighting soloists and catching the fast breaks with the string players. The world music stuff tends to dial in on the drummers and the more musically complex stops and stabs. The traditional jam band stuff takes a lot of its visual likeness from my LD predecessors, and usually has a jam that resolves to a final chorus or coda. And the EDM stuff is generally more video heavy and follows some of the EDM standards with strobe builds and hard outs.”

You travel with the band. How are they as road companions?
“When you travel together is when you really get to know someone at their core. We had a very rough travel summer of festival touring this year, and we all really bonded as a result of making it through those moments together. After all their years of touring, the guys in SCI really care about propagating a positive environment for all of us and the fans as well.”

If you had to pick, what’s your favorite venue that you worked with SCI?
“We do three days at Red Rocks every year, which is amazing, but as an LD my favorite venue is 1st Bank Center in Broomfield CO. This is where we have done NYE the last few years and it has everything we need to do a full-scale SCI shebang and it’s dark! Really dark and I can hang lights anywhere I want in there!”

A lot of SCI shows have some elaborate and artistic sets with various geometric patterned backdrops and similar features. How are those designed? Do you design them? Does the band have input?
“I’ve been with the band for a little over three years now so anything in that time period has been my design for a regular show, but a few times a year we do what we call a ‘Shebang’. What we mean by ‘Shebang’ is a set that’s usually about 30 minutes long where we introduce a bunch of theatrical and production moments along with the music. These are a collaborative planning process between me, the band, management, and my friends at Nova Han Productions.”

In general, does the band give you feedback on your lighting designs?
“I try to engage them as much as possible about things we can do during the show to make it special on a given night. They give feedback from time to time, and it is always very constructive. I want everyone to love the show not just me so I appreciate feedback from anyone including fans. I try not to forget it is the fans that are the real audience I consider the most.”

SCI has always been known as an innovative band, whether it’s in their music or show elements like hooping etc. How does that influence your design?
“With SCI, more than any artists I have ever worked with, I get complete creative freedom to do what I think the fan base will enjoy. I tend to be an early adopter of new lights and do that by design to give the fans something new and interesting to watch. We change designs more often than most bands in our genre, and I try to keep the look of the show different than the rest of the genre but still giving a nod to the lighting styles I like.”

Any advice for other LDs on building a long-term relationship with a band?
“Take time to really learn the artists’ music and your musicians will appreciate your input and you can communicate with them in their world. I will sit down with the drummers and ask them to tap out the ending of a song for me so that I can really hit it and it lets them know I’m paying attention on that level. I’ll ask someone what a song is about so that I can approach it in the tone that it was intended when written.”

What stands out as your best memory or memories of working with SCI?
“Our musicians often travel with their guitars so on a few occasions, like long bus rides, they will pull them out and play for just us and it’s a pretty awesome experience. These guys are all so talented and it is at those times I feel honored to be involved.”