LAKELAND, FL– (For Immediate Release)  — Dominic Lopenzo doesn’t like to play favorites, but when it comes to the lights in his rig, he doesn’t hesitate to say that he is completely partial to beam fixtures, or more specifically the beam function in CHAUVET Professional’s Rogue RH1 Hybrid.

“Beams have become my favorite because they add so much energy to a room,” he said. “I find myself going to them often.”

Partiality to beams might not be unusual in a concert/touring designer, but Lopenzo is speaking as technical director of Grace City Church, a dynamic 750-seat house of worship with a distinctly modern touch. Drawing worshippers of all ages, the church offers three services on Sundays, each of them with a very contemporary bent. 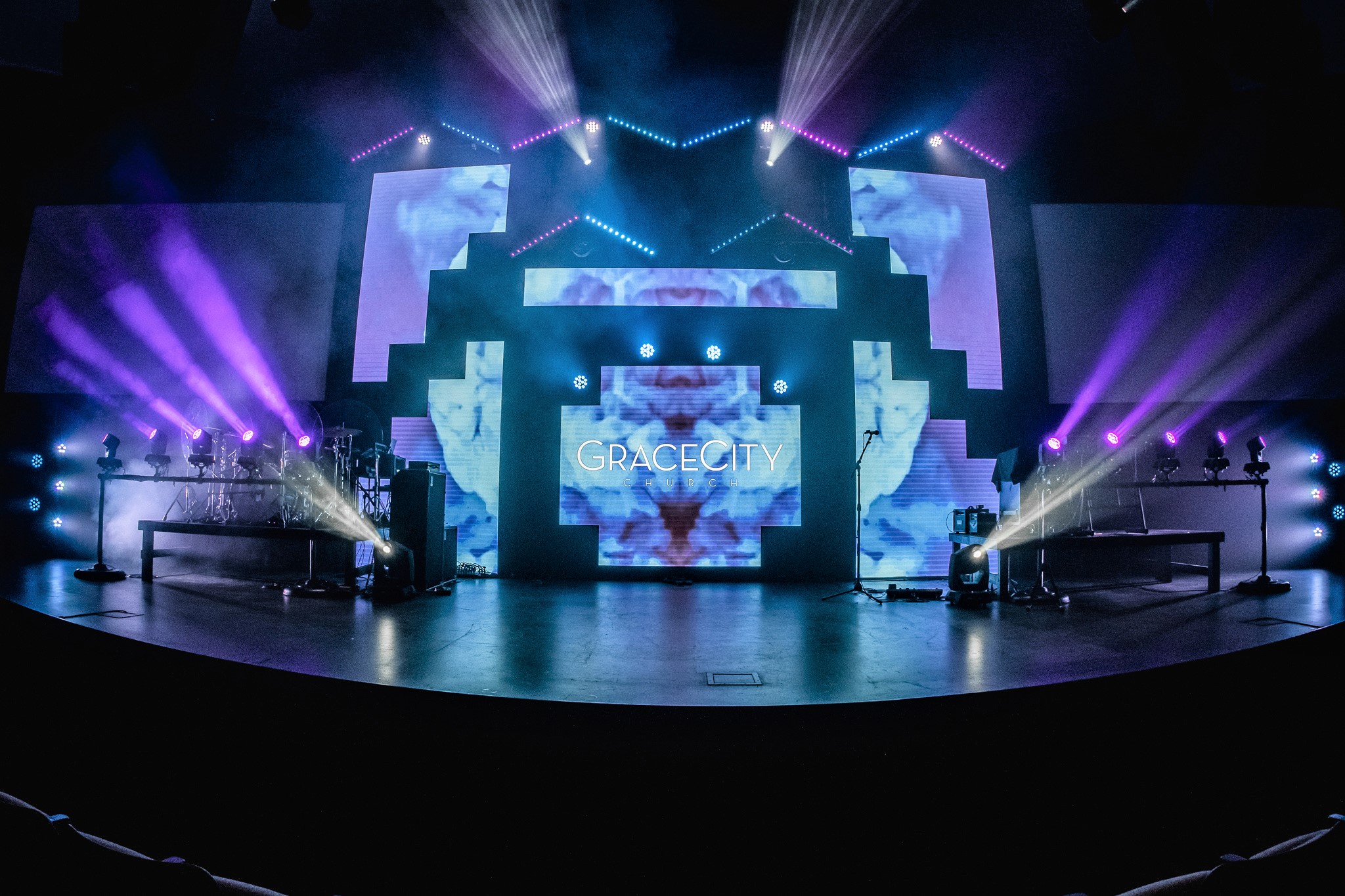 “Many people have described our services as being like a concert, and to our worship team and me that’s a huge compliment,” said Lopenzo, who comes from a concert background and still works at the House of Blues in Orlando in addition to doing his lighting duties at the church. “We pull a lot of ideas from concert lighting and apply them to a worship environment to create something that we feel is unique and engaging.”

Positioned on the stage deck, next to the drum and keyboard risers, the Rogue RH1 Hybrids in the church’s rig (between two and six depending on the service or event) are used to accent key moments on stage and to engage worshippers by directing crisp tight beams across the room.

“I used the beams extensively because of their impact,” said Lopenzo.  “Our stage is approximately 60-feet wide, and the width of the room expands considerably as it goes out. The beams fill space beautifully. We only have one floor, so I am able to point a lot of the lights straight out at the back wall without worrying about them shining into a balcony. We also have a very large LED wall, but the RH1 hybrids cut through everything. 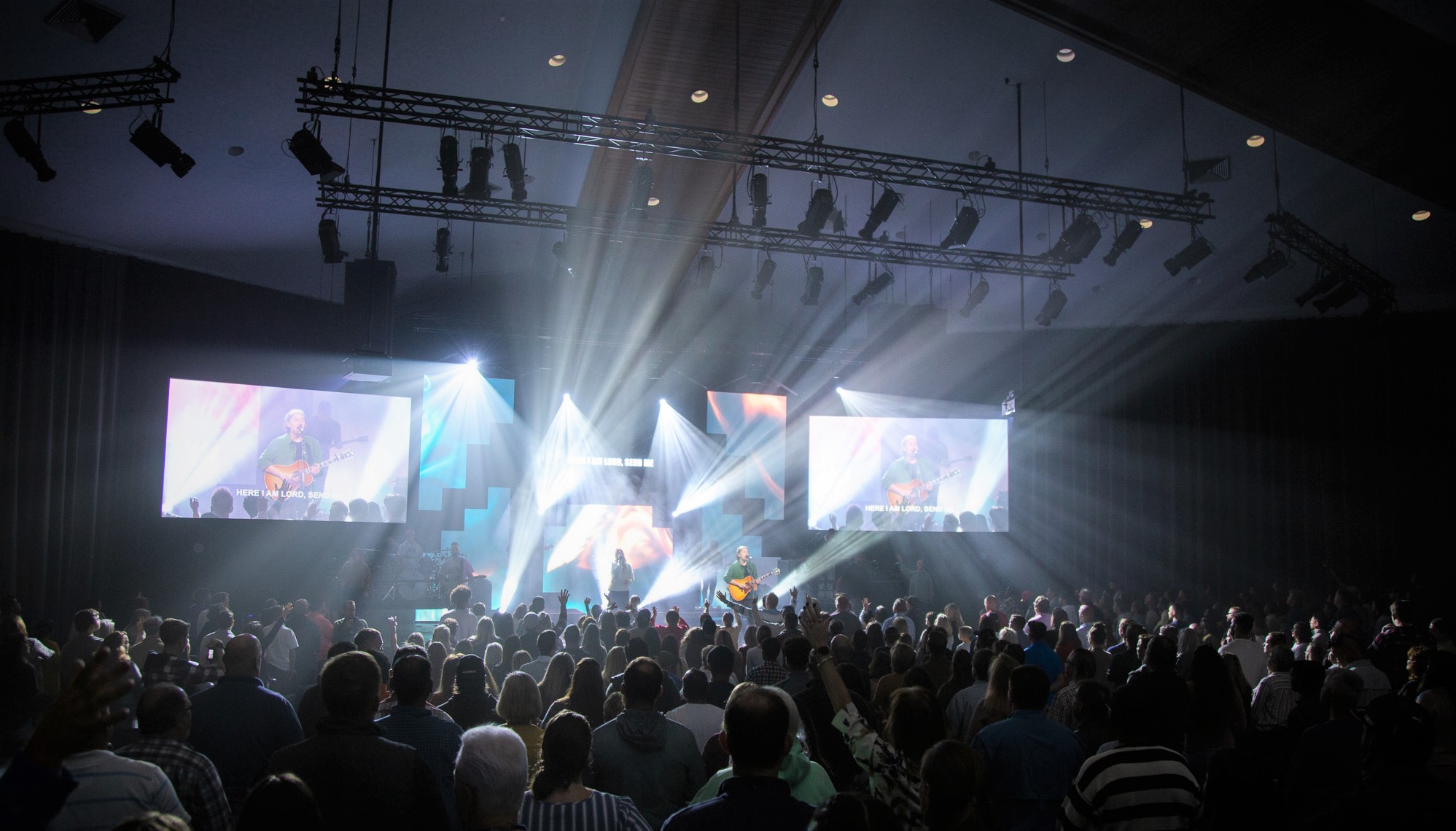 “For slower songs, I’ll put on a gobo and use them to wash the whole room alongside my R3 Spots,” he continued.  “Most of the time, I will use a slow to moderate spin rate with a wide zoom; but I’ve also programmed the gobo spin rate to increase as the song builds to a bigger section.”

There are four Rogue R3 Spot fixtures used at  Grace City Church. Flown evenly on upstage and downstage truss, they are featured in virtually every song performed during services.

“Typically I have the spots focused to a crisp beam at all times, but lately I’ve also been getting great results with them as a wash light by adding the frost and setting the focus to the max,” said Lopenzo. “The colors in the wheel are the exact hues that I want. For slower songs, I will usually add a gobo and use them to wash the walls or even the seating area.  Another trick I learned with these is that if I lower the Iris a lot and increase the focus until the beam becomes crisp again, they essentially become a beam fixture. I use this to try and match them with my RH1 Hybrids so that I have a nice even lighting look across different fixture types.” 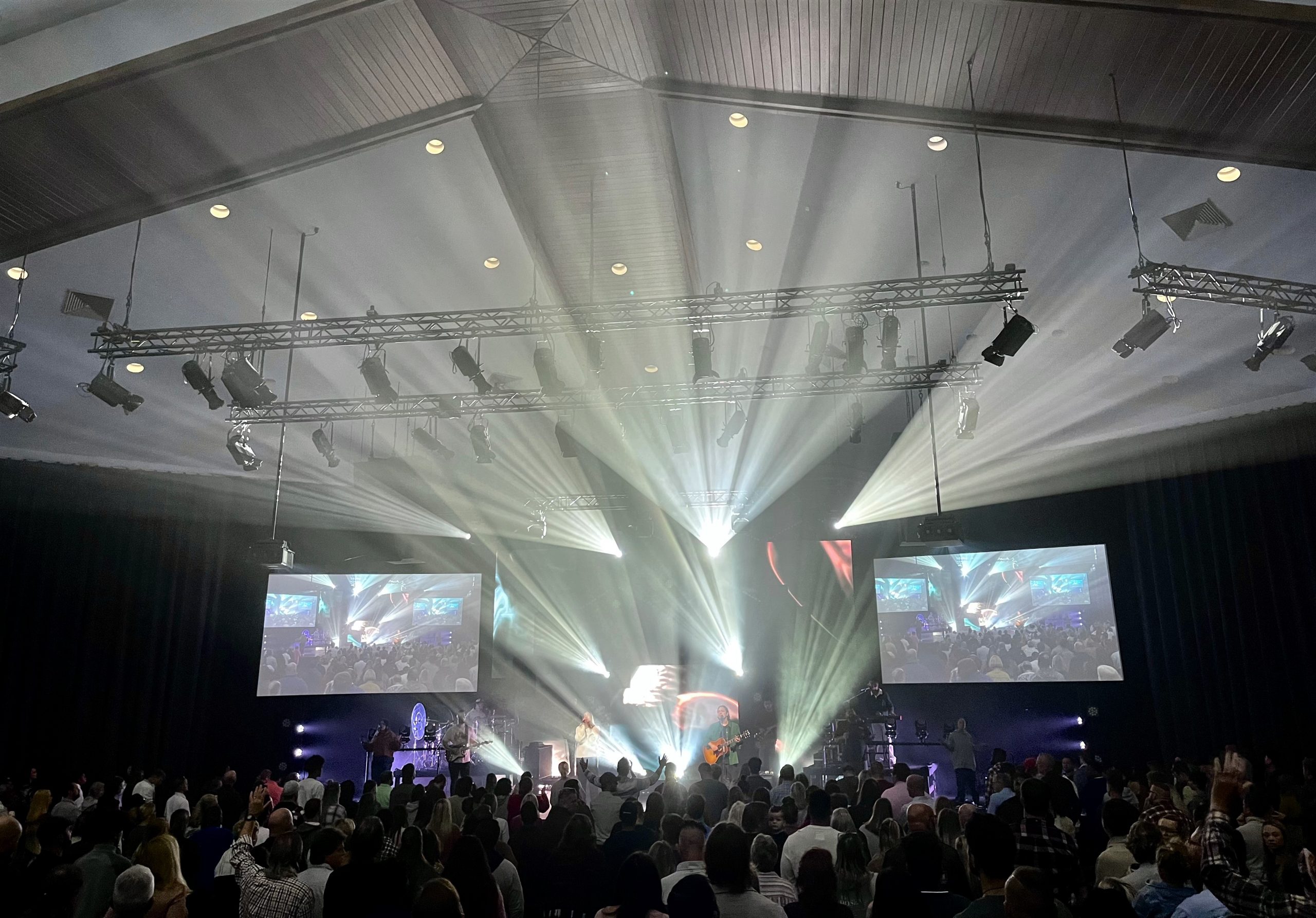 Adding color to Lopenzo’s vivid designs are four Rogue R3 Wash, 10 Rogue R1 Wash and eight COLORado Batten 12 fixtures. In addition to washing the wide room with evocative hues, the Rogue R3 units are sometimes deployed as blinder effects;  a role they play well thanks to their intense output. The Rogue R1 fixtures, which are divided evenly between two truss structures, also fill multiple roles beyond color washing, often being used to lend geometric structure to the stage.

“I like to point my R1 Washes straight out, increase the zoom to 100, and match them to my par lights which are also located around the stage,” said Lopenzo. “This gives me a symmetrical look across my designs. Despite their small size they still put out a lot of light and can easily light up our room. During low moments I’ll have the stage very dark, and then to build I bring in just the R1 washes with a tight beam. They are at a height where they are just above the heads of our frontline. When all 10 are lit up they add a massive look to the stage.”

As for the COLORado Batten 12 units, they’re flown upstage in a chevron pattern and used to create high-impact chases one moment, before being called upon to create bright white blinder effects the next. It’s an idea that Lopenzo says came from a Green Day concert he saw – another example of how this designer is reaching into the touring world to bring an exciting new look to services at his church.