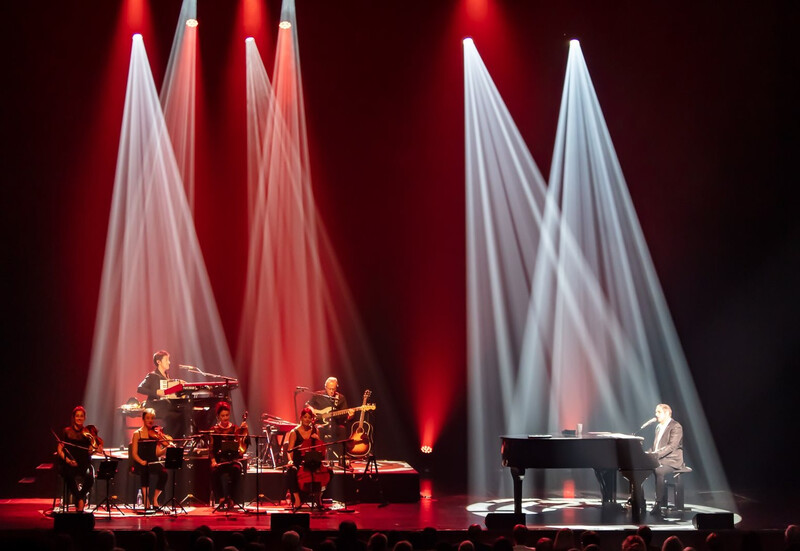 At the start of every project, this award-winning Montreal-based designer will spend hours immersing himself in the music of his client. As each song plays over and over again, he will not only listen for the melodious cues that will ultimately be reflected in his lighting design, he will also be striving to enter the mysterious and complex force that drives the client’s creative process.

It is only by gaining this level of understanding that Lapointe achieves what he calls “symbiosis,” a state where his design and the work of his client are able to feed off one another so completely, that they form a harmonious union; a marriage that supports every nuance of an artist’s performance with an intricate and beautifully balanced blend of light and shadows.

No two shows are ever alike in Lapointe’s world, nor are there any looks repeated in a show. Absorbed as they are in the essence of each client, his designs are as unique as the performances they support on stage. During the course of his career, the widely acclaimed LD has put this design philosophy to work for a range of touring and theatrical clients including Julien Clerc, Diane Dufresne, and the City of Quebec’s legendary 400th Anniversary Celebration. 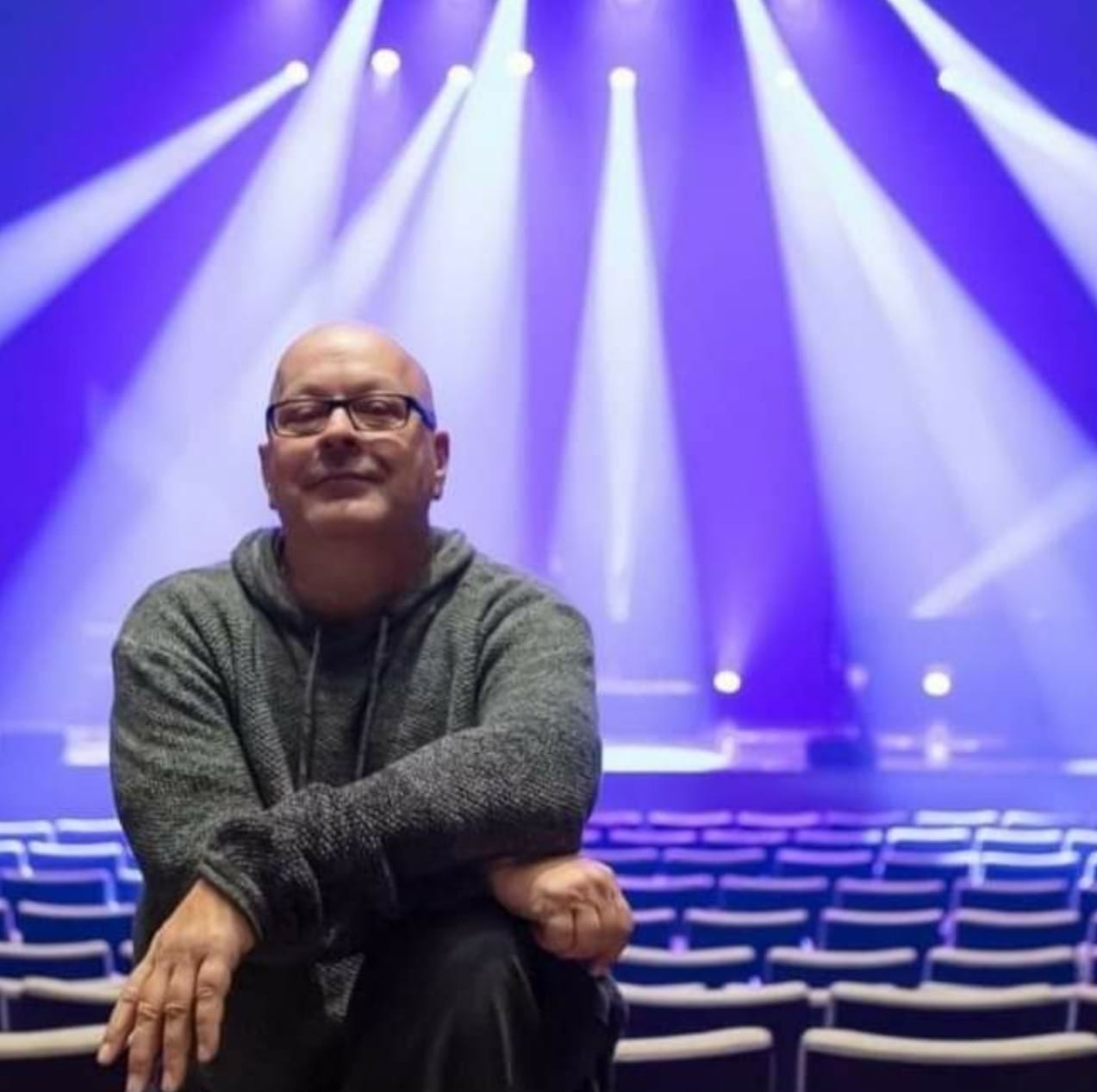 Speaking to us from Montreal, Lapointe shared his insights into the symbiotic process of lighting design.

In your work on the pre-pandemic Julien Clerc Canadian tour, there were 20 songs in the set. You moved your moving fixtures for only two of them, yet you created this engaging sense of motion by changing light angles and zoom range. Can you tell us a little about why you did this rather than move the fixtures?
“The show of Julien Clerc is one of mostly beautiful pictures or ambience, so the movement is not always necessary. This show is all about mood, so I chose to create “imagery” rather than “dynamics” to fit each song. In the end, it’s all about supporting the act, not overwhelming it. The audience is immersed in a mood that is more complete and subdued — and each and every track, like scenes of a play has its own flavor and visual signature.”

Why did you determine to move the fixtures on the few songs you did? What was it about them that made you move the fixtures?
“In the programming of a show, some decisions take placed based on the mood, and in the hope of augmenting the experience. In this particular instance, two songs with stronger rhythmic sections and a more festive mood stood out as being perfect for some movement by the lighting instruments.”

We are impressed by how you sculpt the space around the artist on stage, whether is Julien Clerc or Diane Dufresne. Does the physique of the client influence how you light them?
“Absolutely! The relationship between the lighting designer and the artist is a very intricate one. As a designer, I owe it to the artist to support their creation. This includes their physical use of the space, which should never be supplanted by a lighting design. Much like the dynamics between great food and great wine…it’s all about the pairing.” 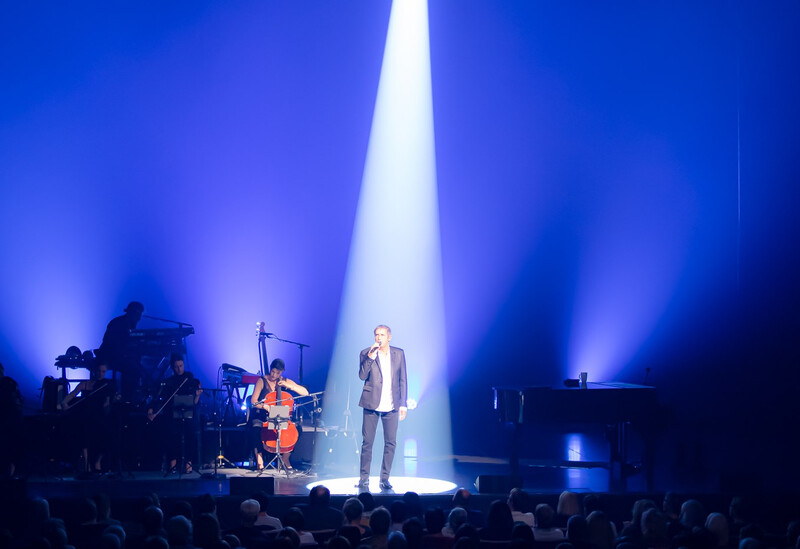 Diane Dufresne wears flamboyant costumes, while a singer like Julien Clerc is more conservatively attired. How does what a client is wearing influence your lighting?
“Good question! These are two very different artists, so we cannot really compare the two styles. Since we are talking about diametrically opposed artists, it’s easy to explain the difference. While both artists are signer-songwriters and composers, Julien Clerc is a performer in the classic sense of the word, while the Diane Dufresne creates these very theatrical and elaborate scenarios. So, I light one with subdued hues and static feels, while the other is lit much more in the fashion of a theatrical production with very aggressive angles and a lot of shadow play.”

Speaking of flamboyance, your designs are very bold and arresting, yet you manage never to distract from the artists on stage. How do you achieve that balance?
“Strangely, I have just listened to a song from a great Quebecois artist, Fred Pellerin, which says “it’s from the shadows that the light is most beautiful.” In the end, this has always been my ethos. I light everyone of my artists in a way which most suits their signature. It’s not about the amount of instrument as much as it is about placement and usage. Unfortunately, this is a trait that I fear is being lost.”

You’re an avid motorcycle rider. Why do you enjoy this? Does riding influence your approach to design?
‘Aha hah…ask anyone who rides, and you will always get the same answer ‘freedom!’ The work we do forces us to live in tight proximity with others on a daily basis. On the bus, in a plane, or even a hotel room — we are rarely ‘alone.’ Ridding brings me a balance. The freedom and solitude of a long ride serves as much to free my mind as it does to focus on my next creative challenge.”

What is the scariest thing about starting a project?
“Each project is different, and that’s what makes this job so magical, I actually love the creative challenges. As for what scares me, after the hectic period that leads to premiere, there is always the reaction of the critics the following day. It’s always nerve racking.” 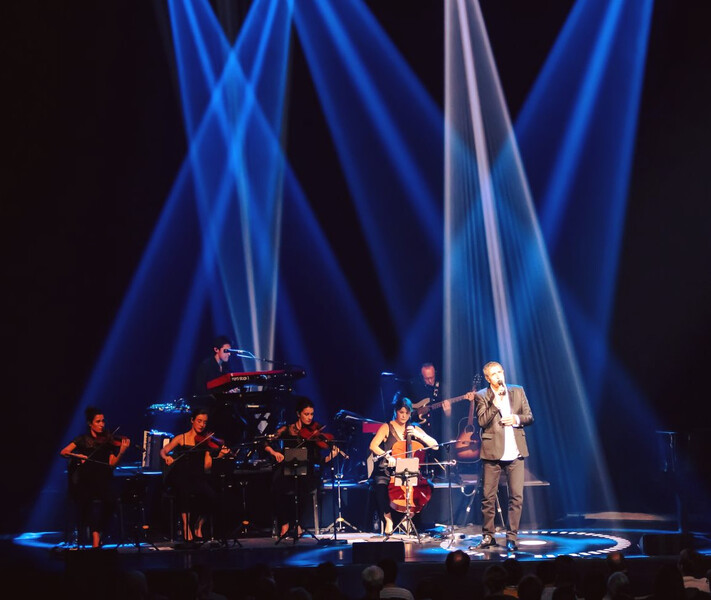 Is there one particular aspect of lighting design that you personally find most
challenging?
“For a designer today, the continual challenge is to keep on top of what is new and what is of value on the market. For example, when I specified the profiles for the Julien Clerc tour, I had not even physically seen those particular instruments. I went on specs and on the recommendation from the vendor for this tour.”

You’ve worked with a wide range of artists. Do you have to like a client’s music to do a good job lighting a show?
“I will tell you that in my life I listen to everything really from classic to pop, rap heavy metal – literally everything according to my mood. However, when I take on a project, I immerse myself completely in the music of that artist. After a certain period, I find myself in symbiosis with the music and then I can see in my minds eye each image that attaches itself to a song. It’s from that moment on that I begin the design phase.”

How did you get started in lighting design?
“Originally, I had a band. We played rock and dance. This in essence the start of a long career. My first official contract was STRAMANIA IN 1980 thereafter I started making television as director of photography. One thing led to another, and here we are in 2020. I feel blessed to be able to go from studio, to theatre to live music shows as a lighting designer. I feel equally blessed to have been witness to and part of the incredible technological advances of the past 15 years and excited about what is yet to come!”

What would you have done if you didn’t become a lighting designer?
“I was enrolled at the Firefighter academy, but I was tortured at the idea of quitting my band. The morning of the first day of school, I sat in bed for a long time pondering my situation…and well…. I went back to bed.” 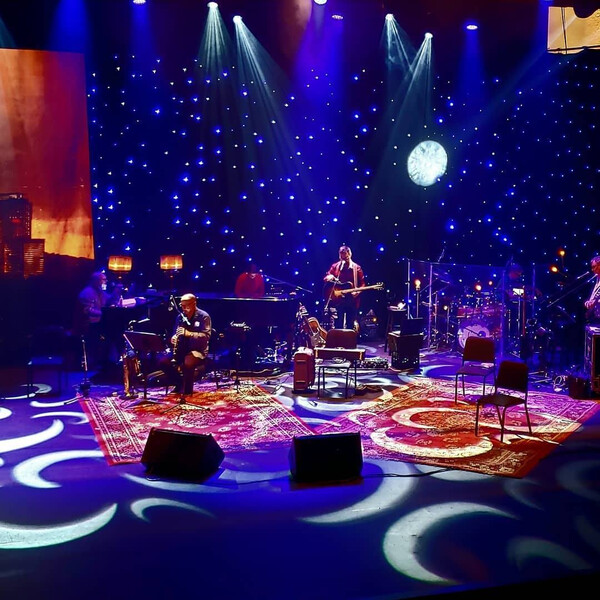 We have been impressed by how you create texture on stage around artists, often surrounding the actual spotlighting of them with a ring of gobo patterns, or downlighting them from multiple directions. How important is texture to your designs?
“It’s important to me to never repeat the same image twice in a show, just as much as it is important to respect the performer’s vision. Sometimes it’s actually worth it to clash if you want to bring that moment somewhere that the artist might not have expected. To do so, it’s vital to have lighting instruments that offer as many variations as possible.”

What are the three most important personal qualities a lighting designer should have?
“Always be attentive to the artist and their vision. Keep an open mind. Create, don’t duplicate. Stay humble.”

Is there one type of lighting fixture that you find most essential?
“All instruments become essential when they are used correctly, it’s often what differentiates a good design from a weak one. Some newer lights offer a multitude of different options, and this can be very useful, but sometimes it can also be a trap. I try to focus on a specific function of an instrument and exploit it, rather that going through every possible variation within a show. I don’t design around the fixture. I find fixtures that fit my design.”

You’ve done a great deal of work in theatre as well as concerts. How does lighting the two compare?
“Obviously, the environments are as uniquely different as the productions. It has little to do with audience size. As an example: I did a theatrical design for Quebec’s 400th anniversary, which required 4’ x 53’ trailers of lighting gear, with instruments ranging from 300 peppers to 25k Fresnels, as well as a complex array of movers…most of them called on to perform only two or three tasks. On the other hand, the Julien Clerc show which actually ran in the largest venues in Quebec, was built around a fairly small package of less than 30 instruments, not including house FOH and Spots. It’s never about the quantity of light, but the quality of it.”

Looking back on your career, is there one particular project that most influenced you development as a lighting designer?
“I’d have to differ to your previous question, the 400th show while not my biggest was definitely one where I was given as much creative freedom as I was also responsible for directorial direction. So, my pride resides in having met both expectations and challenges.”

If you told someone at a party that you were a lighting designer, and they asked ‘what does a lighting designer do?’ What would you tell them?
“Wow, that’s one question that is almost only possible to answer by inviting a person to my creative space, and then to the actual event, so they can see the virtual become real. I have been blessed to be in a career that has given me some recognition, several nominations, and one major award, but when we chose this life, we must also choose to work in the shadow of others and be proud of that.”

How would you like to be remembered as a lighting designer?
“I believe that as an individual, the people who know me would say that I am a calm person, who is open to suggestions and generally a great pleasure to be around me especially in front of a worm of wine and a good meal. But as a designer …. I don’t really know I will simply tell you that I hope I have successfully completed my assignments with the artists and producer.”