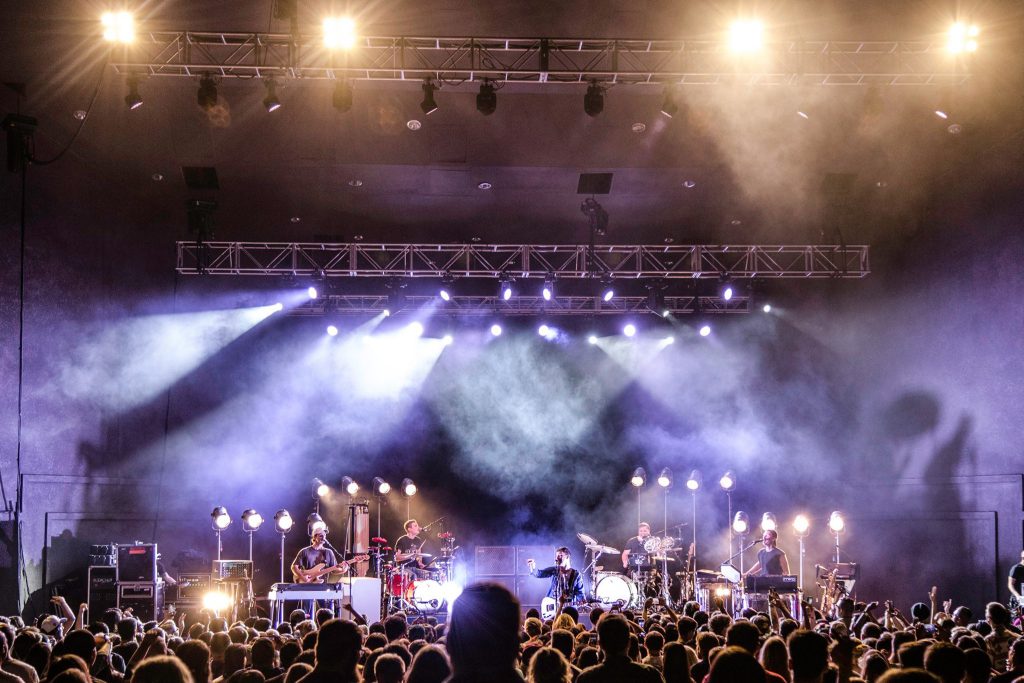 MESA, AZ –  On September 17, 2014 radio station KDKB 93.3 shook up the Phoenix media market by abruptly dropping its tried and true 43-year old rock format to become the city’s only alternative music broadcaster. It hasn’t looked back since! Breaking new ground for indie and alternative music in the Valley of the Sun, the station has climbed to the upper echelons of the area’s radio market. On Friday September 22, a little over three years after the rollout of its new format, the station celebrated alternative music with a star-studded Dia De Los ALT show at the Mesa Amphitheatre.

Featuring Top Ten alternative recording artists from around the world, like New York’s Bleachers, London’s Bishop Briggs, and Denmark’s New Politics, the event served up a nightlong smorgasbord of music done in a seemingly endless array of quirky and highly individualistic styles. John Garberson of Creative BackStage reflected this quixotic music in light as it wove its way through a free-flowing stream of creative interpretations. Aiding him in this undertaking were his assistant LDs Rita Assi and Chris Brodman, as well as a very flexible rig that featured CHAUVET Professional fixtures.

Key to creating this immersive visual flow were the rig’s eight Maverick MK2 Spot moving fixtures. Flown four apiece on midstage and upstage truss, the 440-Watt luminaires filled a wide range of roles for the Creative BackStage team, from backlighting and casting specials on performers, to engaging the crowd with audience lighting, to aerial effects, to underscoring ballyhoo moments with colorful crossing patterns.

“The Mavericks always give us a lot of options with their rotating gobos, color wheels and nice zoom range,” said Garberson. “Having eight of them set up on two rows of truss created a lot of depth on stage. Plus, their output is very intense, more than up to the task of handling a 5,000-person venue like Mesa Amp.”

Also enhancing the versatility of the Dia De Los ALT rig were its 24 Rogue R2 Washes. Garberson positioned these RGBW moving fixtures throughout the rig, flying 12 downstage, six mid-stage and six upstage. Reflecting the emotional twists and turns of the music, the Rogues were used to effect quick color changes on stage. The rapid pan/tilt movements of the fixtures were also relied on to accent moments when the tempo of the music picked up.

Engaging the sellout crowd were the four STRIKE 4 multi-formatted fixtures that Garberson and his team flew on downstage truss. “The STRIKE 4s served as blinders at this show,” he said. “Aside from they’re brightness, their warm white glow is really effective at creating a good feeling in the crowd. There’s a strong connection between bands and fans in alternative music, and audience lighting reinforces that bond.”

As anyone who attended Dia De Los ALT concert would agree, the alt band-audience bond glowed brightly in Phoenix on this September night, supported by fiercely independent music and some very flexible lights.