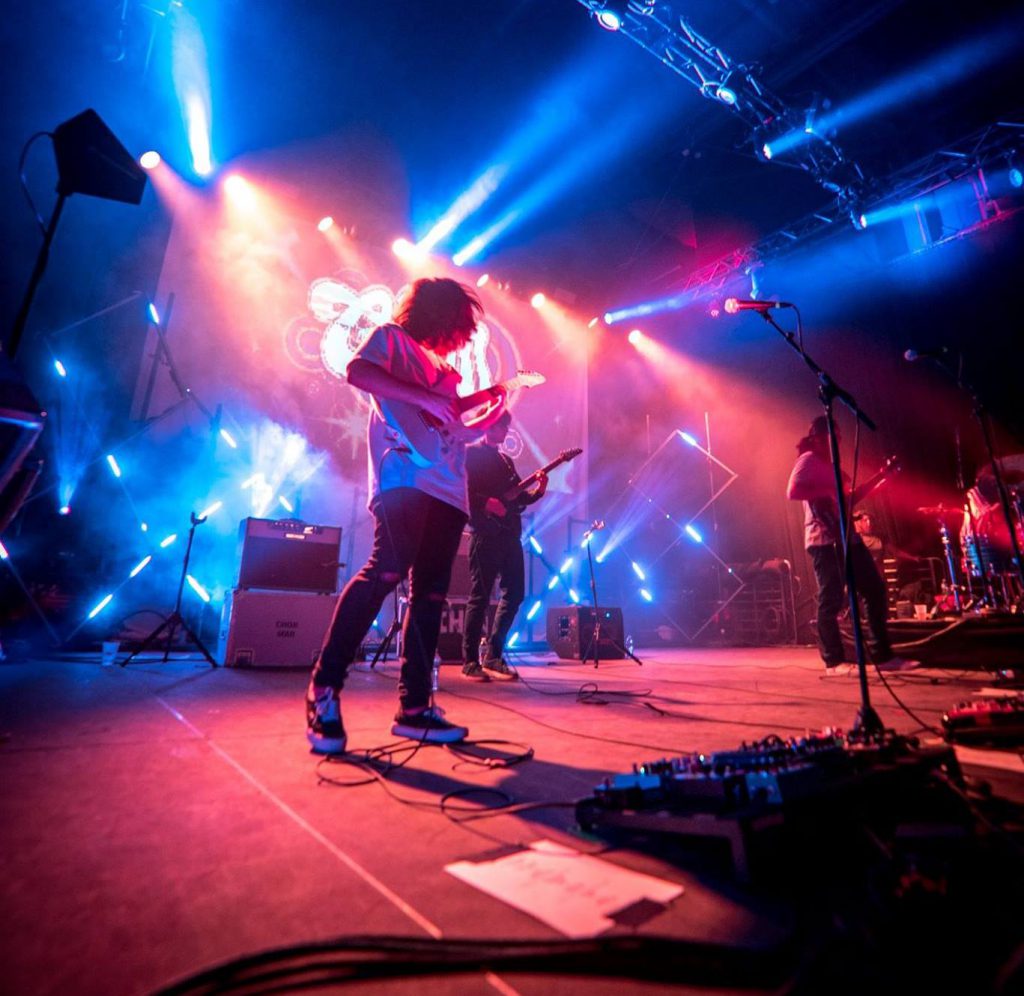 NEW YORK – Chon has never been a band that followed predictable patterns. An early proponent of “math rock,” the Oceanside, CA-based quintet built a loyal following by pushing musical boundaries in unique ways. So, when Victor Zeiser and his team at Squeek Lights were brought on board to light the band’s 2018 Spring Tour, which concluded at the San Diego House of Blues on July 1, they expected to be asked to create a design that defied convention. They weren’t disappointed.

The band wanted a design that would allow six VIP fans to play Nintendo’s Super Smash Brothers game during their show and have the results visible on stage. Zeiser and his team met this request in stunning fashion, creating a captivating matrix pattern on stage with 34 CHAUVET Professional Épix Strip Tour fixtures.

“The focus for the design actually came to us from a unique direction,” said Zeiser. “At the start of the process we were told the band wanted a select number of VIP fans to be able to play Super Smash Brothers on the stage video panels during the set. They also had a lot of 8-bit content for video, so we kept this in mind during the design process. The Épix Strip Tour was key to helping us do this in a way that looked really good.” 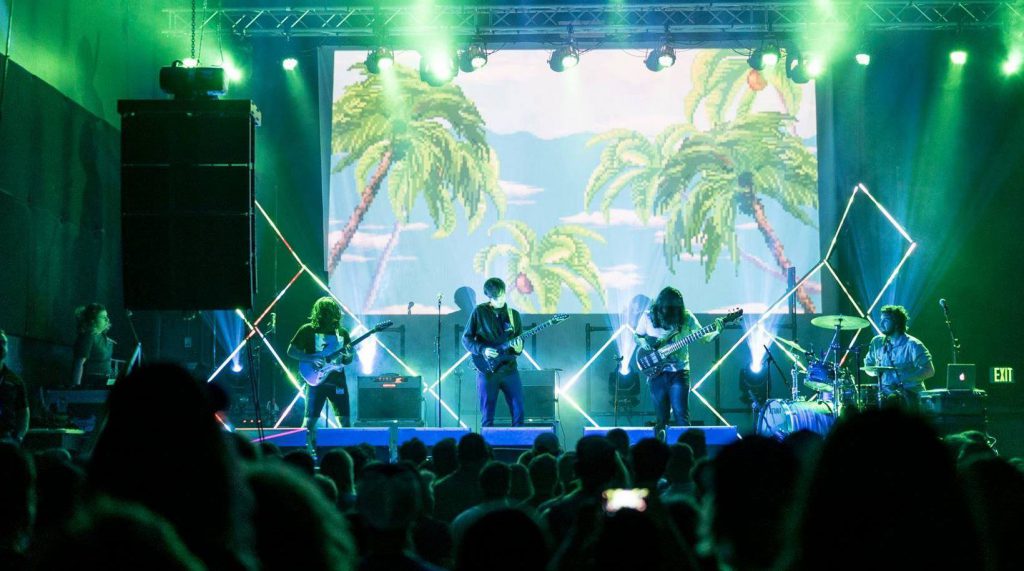 Using the Épix Strip Tour fixtures, Zeiser created a small grid of diamonds that bordered three sides of projection screens. Benjamin Jarrett of Squeek Lights mapped the Épix Strip Tour units in Resolume and fed them the same content that was on the video screens. The fixtures were driven by an Épix Drive 2000 IP.

“This arrangement gave us a great visual texture and quickly made looks that would take a while to program,” said Zeiser. “Quinn Branbender, our LD for the tour, also had several overrides at his disposal to do different effects and solid colors with the Épix strips during the show to respond to what was happening each night.”

For moving lights, Zeiser placed his new Rogue R1X Spots in the center of the diamonds, using them to create gobo patterns from behind as well as moving rays of light. Dave Summers programmed a continuous flow of patterns for the Rogue fixtures.

Zeiser also had six Rogue R1X Spot fixtures placed in the grid upstage to be the main moving light of the floor package. For much of the show, these units were used to make beams, but at key moments they were also called upon for backlighting and cross-lighting. “When you throw in the prism and the gobo, you can really cover a lot of space with them,” observed Zeiser.

The Chon tour rig also included COLORado 1 Solo fixtures. The Squeek team positioned three of these fixtures stage left and an equal number stage right to use as sidelight. “We wanted sidelighting to add depth to the stage,” said Zeiser. “This was very important to making the geometric patterns pop in the center of the stage. The rich colors we got from the COLORados added to the impact.”

Setting up the Chon rig was made easier by a structure designed by Steve Kosiba of Squeek Lights, who fabricated dual wooden bases with square frames for spacing the units across the stage. It was one of many impressive “geometric twists” on this intricately designed tour. 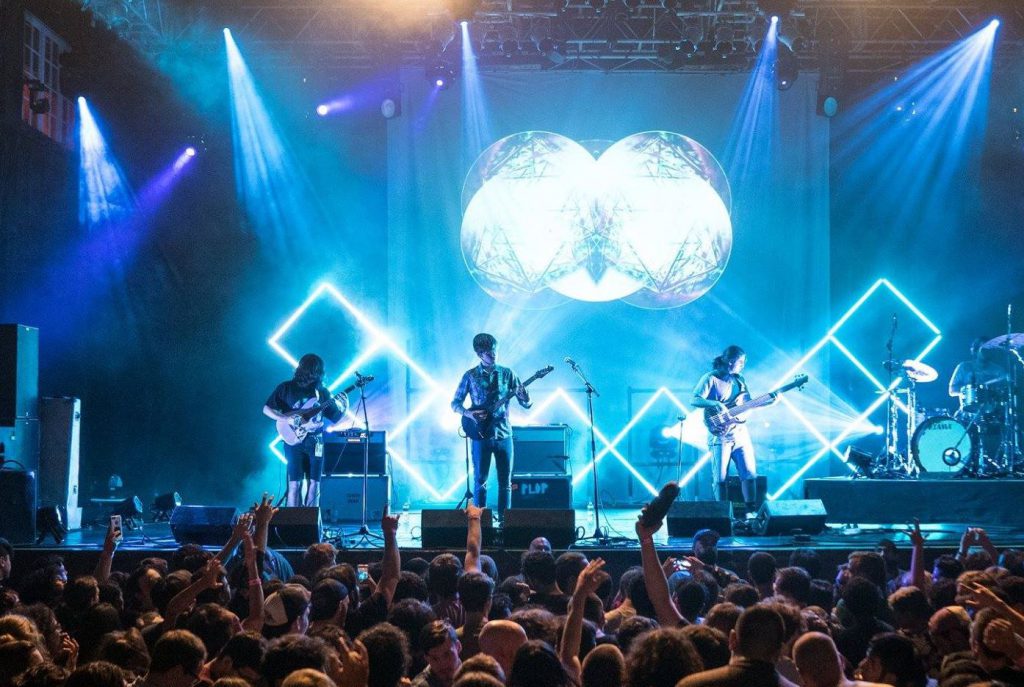