HALIFAX, UK – With its magnificent period sandstone construction and impressive 8,000 square meter courtyard, The Piece Hall in Halifax, West Yorkshire, is one of the UK’s best-preserved examples of Industrial Revolution- era architecture. Although the courtyard initially served as a marketplace for traders selling woolen cloth from the town’s many textile mills, a recent comprehensive renovation of the premises has given the courtyard a renewed purpose: that of an exchange for the arts, culture and music.

One of the events making use of the transformed Piece Hall courtyard is the Spiegeltent – a makeshift live venue, akin to a circus big top, which caters to an eclectic musical program in the run up to the festive season. For the most recent incarnation, which included a varied program of bands, cabaret and comedy, in addition to headlining musical acts such as Gary Delaney, Yorkshire-based Sound & Light UK LTD integrated 10 CHAUVET Professional Rogue R2 Wash and 10 Rogue R1 Beam fixtures into their lighting rig.

Given the wide spectrum of performances taking place during the three-week festival, Sound & Light UK was tasked with providing illumination for a multitude of possible stage setups – from classic rock and roll, to more precise visuals for standup comedy and cabaret shows. The interplay between the Rogue R1 Beam and R2 Wash fixtures, flown from above stage trussing, gave Sound & Light the necessary breadth of visual expression required. 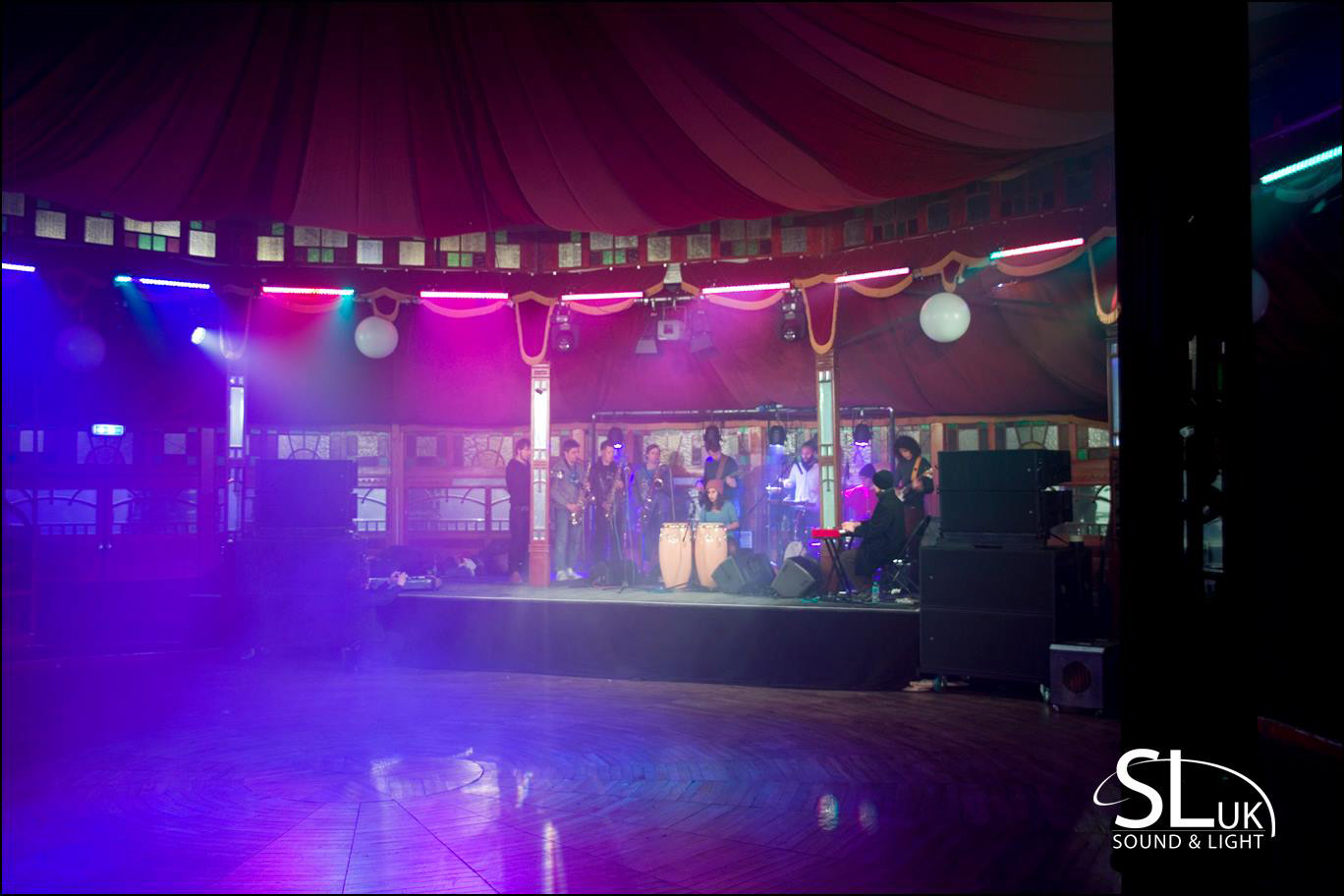 Drawing on the 19 (15W) RGBW quad-LED source of the Rogue R2 Wash fixture, Chris Bottomley and his team were able to deploy a visually engaging blanket of saturated color to create emotive and energetic supporting visuals for the musical performances.

“The R2 Wash is an incredibly versatile fixture,” commented Bottomley. “In addition to providing bursts of saturated color on stage, we could also use the fixture’s (12° to 49°) zoom to transform the wash into a soft-edged spot – an effect which came in incredibly useful during the repeated recalibration of the stage setup during the program.”

Complementing the wash effects with precise throws of light were the 132W Rogue R1 Beam fixtures. Thanks to their independently controllable 5-facet and 8-facet prisms, Chris was able to initiate a contrasting set of aerial effects with which to punctuate the blanket of color provided by the wash fixtures.

“The R1 Beams were essential in adding an element of movement to the performances, punctuating the blanket of colored wash with moments of eye candy,” continued Chris. “And during the standup comedy and cabaret show events, the crisp beams gave us the tools to create accurate and precise illumination of the subjects on stage.”

Due to limitations in the number of rigging points and the height of trussing within the Spiegeltent, one of the central considerations for Sound & Light was to find a set of fixtures that could deliver upon a wide range of looks without taking up too much space or adding too much weight.

“The compact size of both the Wash and Beam fixtures gave us the right balance between performance and practicality,” continued Bottomley. “Given the constant re-rigging of fixtures for different events, the Rogues proved themselves to be easy to handle, saving us a considerable amount of time and effort.

“It’s a testament to the versatility of the Wash and Beam fixtures that we were able to provide such a wide range of visuals for the hugely eclectic program,” concluded Bottomley. “What’s more, it’s great to be able to play a part in Yorkshire’s cultural offerings.”