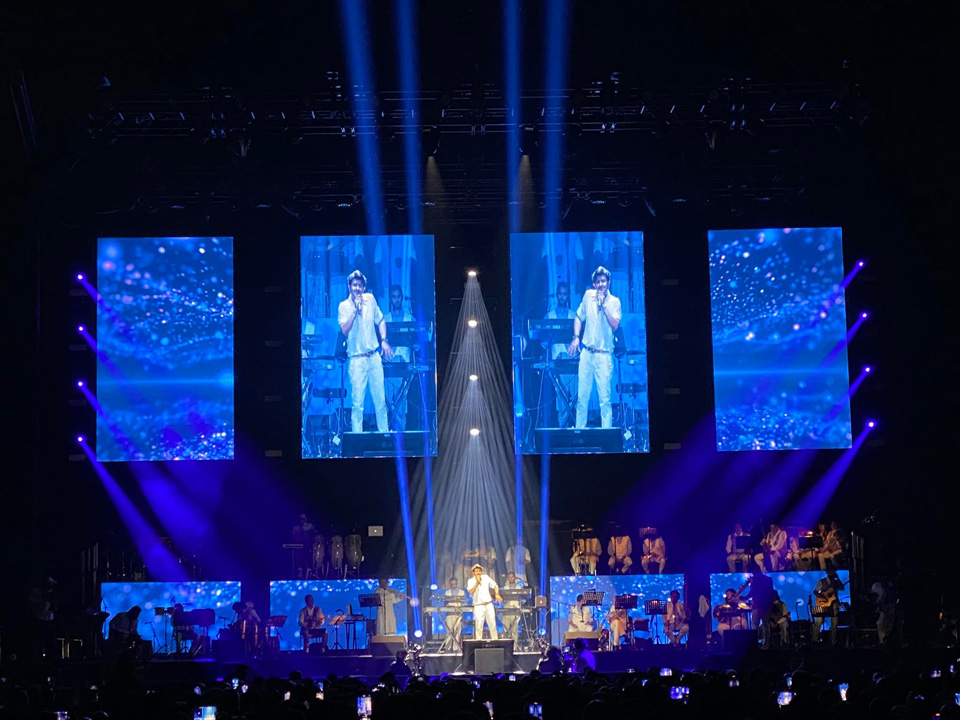 There are good reasons why the concept of the center occupied such a symbolically significant place in ancient philosophies across the world. All creations, regardless of how great, even the very universe itself, according to the Big Bang theory, start at a small central point and expand to embrace all around them.

This celebrated Indian lighting designer has channeled this core principal in his work for an impressive list of clients, both in his own country and abroad. Following what he describes as a “center look,” Dsouza strives to fix his typically elaborate designs at a simple starting point, often with lights hitting the artist from multiple angles, and then expand them outward. As his shows spread their wings, they reveal an ever-more intricate web of light and video accented by a rich tapestry of colors, all while remaining connected to their central origin. 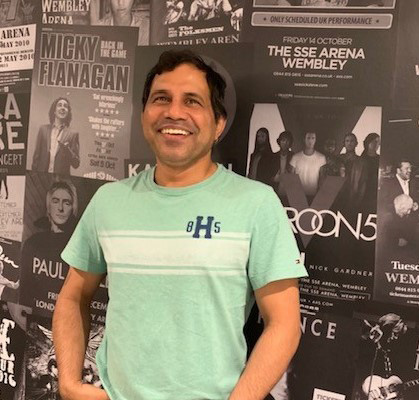 For the past two decades, Dsouza has followed this approach when lighting many of the leading recording and Bollywood stars in India, including Sonu Nigam, Asha Bhosle and Vishal Shekhar, as well as global artists like The Beach Boys, Jethro Tull, Def Leppard, Peter Gabriel and Porcupine Tree. Working in over 160 countries during this period, he has also designed for corporate clients like KLM, British Airways, JSBC, Guess and De Beers.

Although Dsouza’s designs usually follow the same center-out pattern, each of his shows has a unique look, reflecting his client’s aspirations for a concert or project. Moving from a core starting point makes it easier not to retrace steps, as this prolific designer explained when we spoke to him on the eve of his most recent trip to the USA.

You enjoy a very good and productive relationship with Bollywood superstar Sonu Nigam. What are the keys to a good lighting designer and client relationship?
“Mr. Sonu Nigam is family to me. I have been working with him for more the 10 years. He gives me a freehand to get the best out of my creative efforts. He is always open to ideas. This allows me to design something different every single time. As a creative person there is no better thing that can be given to you .”

In 2021 you did an impressive design for Sonu Nigam at Wembley Stadium that had lights converge upon him from several different points. We’ve seen you do this around the world for other artists as well. What is the different effect created spot lighting an artist from multiple spots rather than one?
“This is something I try to do. As much as possible, I like to create what you might call a ‘center look,’ for the opening and closing of a song, and have it appear differently each time. Probably around 60-percent of the songs in my shows will open with the main performing artist as the focus. The other 40-perecent will focus the opening on the musicians. I try to build my color and painting from the center and give it different moods depending on the song.”

We really like how you played light off against the water of the Shipra River in your work for playback singer Kailash at the ancient city of Ujjain. Do you like to weave your environment into your design when possible?
“Yes, this show was one of its kind. We had the stage in the middle of the river with the audience was all around us on land. We had decorative festival lights around the building and we had a few moving head washes lighting up the air and the water. Weaving the environment into a design creates an engaging sense of unity.” 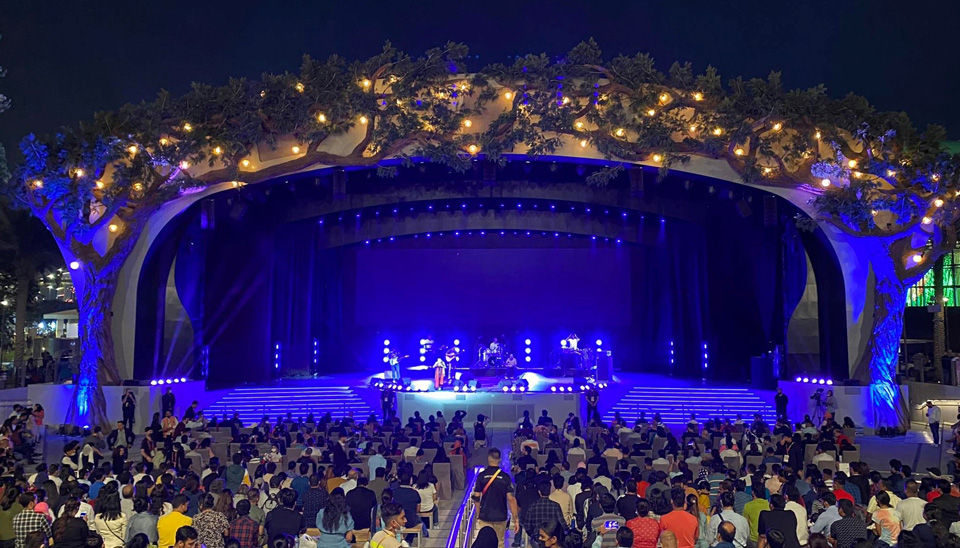 We mentioned your work for Sonu Nigam at Wembley. You also have lit Asha Bhosle at Albert Hall. Are there differences lighting a show in the UK as opposed to India?
“It’s not especially different between India and the UK. However, the Sonu Nigam and Asha Bhosle shows were totally different, because the genre of music is different, even though both are Indian stars. Asha Bhosle is a playback singer, while Sonu Nigam is an entertainer, he is always running from stage left to right and into the audience. His music makes people dance to his tunes. As such I want my lighting to follow him in a dynamic fashion.”

Speaking of geographies, what were some of the projects that you designed in the USA?
“I have worked with different artistes in the United States and at several venues.
One of the most interesting projects I did was in New York for “India at 70” . It was all at different venues. Pier 69, Bryant Park, Rockefeller Centre, Cipriani, the New York Public Library and many other venues.” 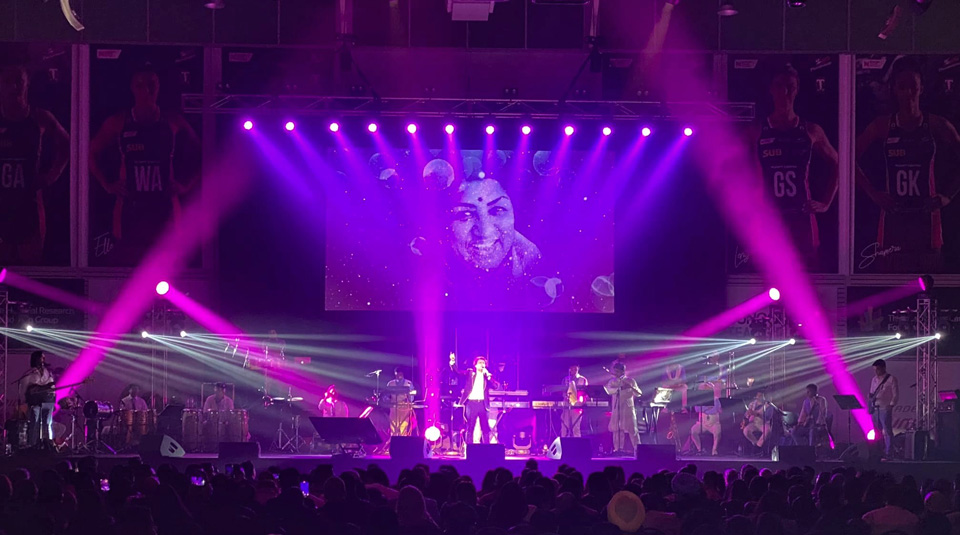 In addition to designing for concerts and tours, you’ve also done award ceremonies like the Bollywood Music Awards. How do they compare to concerts in terms of lighting?
“Bollywood awards shows are way different because you have to make sure the lighting is camera ready as it is telecast around the globe. At the same time it has to be lit appropriately for the audience in the venue. Mostly at the Bollywood Awards you will have an actor or actress performing with dancers and various props, while at concerts it’s rock ‘n roll where the performance is for the audience present.”

You make great use of colors in all of your designs. How do you decide on color palettes?
“I do use a lot of colors in my shows, because every song can be translated in colors in a way that is unique to it. Color creates the distinguishing mood for each song.” 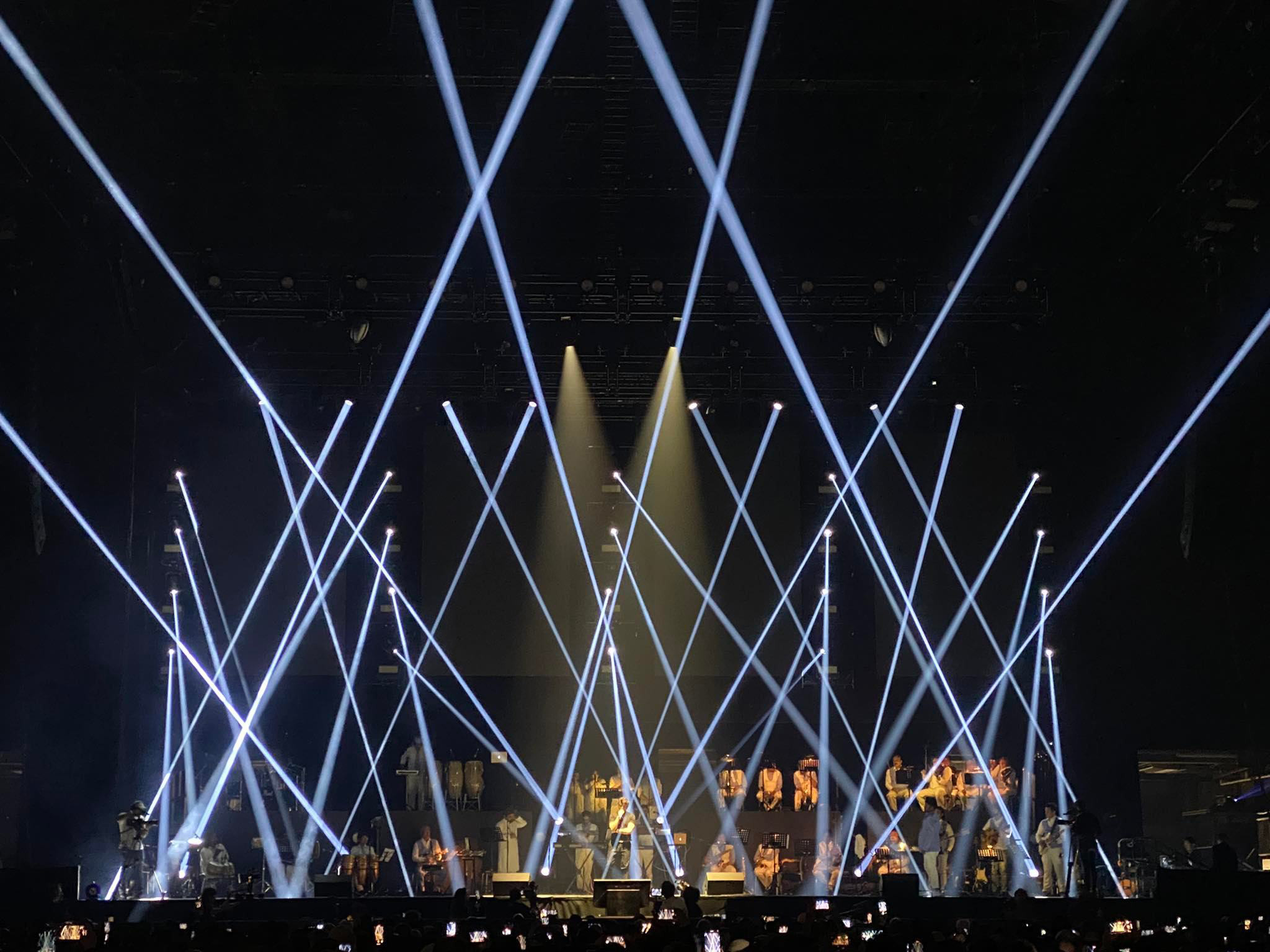 Another thing we’ve been impressed by is your use of gobo patterns. Any advice on how to use gobos most effectively and what mistakes to avoid?
“I use gobos in different ways depending on the needs of the project. Whether the Gobo needs to be focused, or out of focus depends on the mood of the song. When I do architectural lighting, I use gobos to highlight and enhance the building. Which gobos I use depends on the size, design, architecture, building material and colour of the building. For example, I used gobos at the New York Library very differently than I did at the Burj Khalifa sky scraper in Dubai. The differences in the architecture of the two buildings demanded very different approaches to design.”

You also make great use of video walls. What is the key to balancing video and light together on stage?
“It is important to plan with the VJ, so you are using similar color palettes and design. You also want to make sure you are both in sync as far as the texture used in color, so you work together to create a unified mood and ambience.” 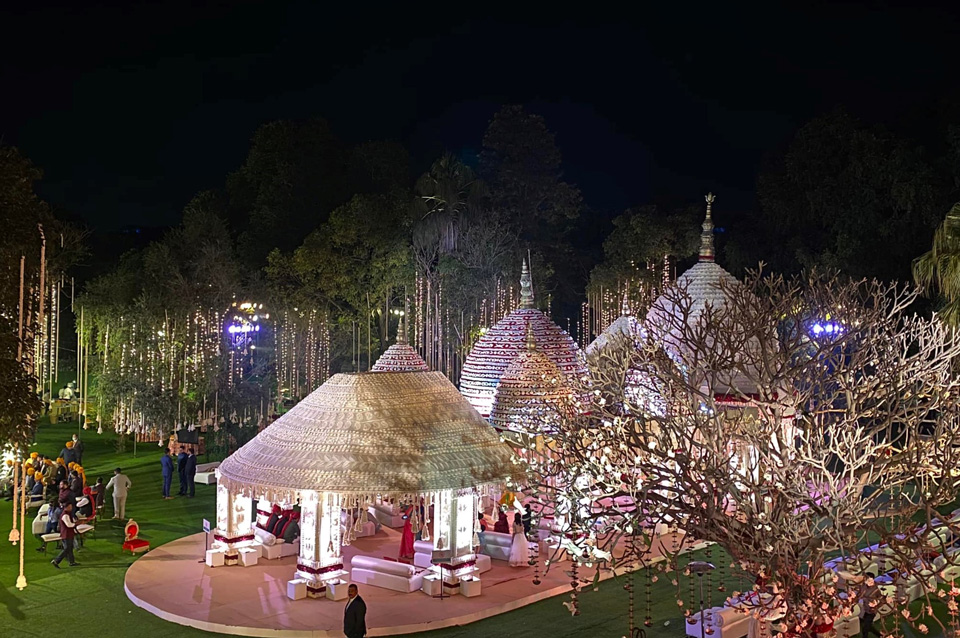 Given the big scale of you shows, where do you begin when designing them? Is there one element that you always start designing first?
“First of all I make sure I get the mood board or story board, and then I take it from there. Once that is done, I start creating new looks for every song keeping in mind the music and tempo and mood.”

How do you get inspired creatively at the start of a project?
My inspiration comes from wanting to please the artist or my client as the case may be. I want to reflect what the heart of the show or project is all about from their point of view. You know, when an artist says to me ‘I want my show to be look and be different,’ it excites me and gives me all the inspiration I need.” 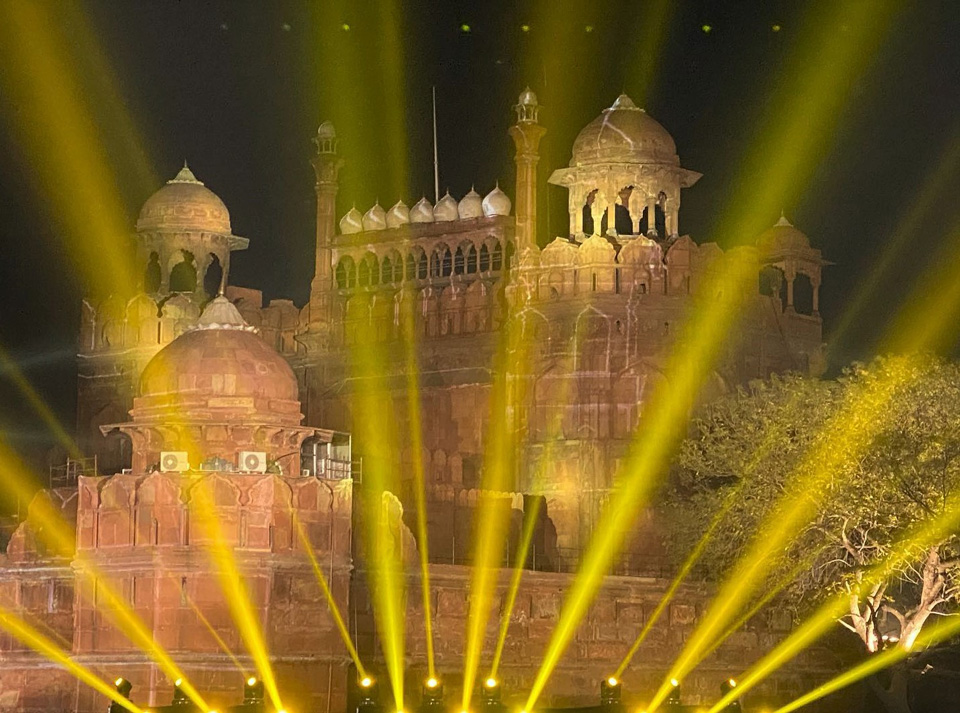 How did you get started in lighting design?
“All credit goes to my mentor Sam Kerawala, the late Kaivan Mistry, Praladh Upadhyay, Jules Fisher, and Richard Pilbrow. I stared my career in theatre and from there moved on to architecture, fashion shows, and concerts.”

Is there a ‘Roosevelt Dsouza look’? You know, a signature style that defines your work?
“Yes, as we discussed earlier it is a center look with very tight beams.”

How would you like to be remembered as a designer?
“As someone who used his skill to illuminate not just the stage but the lives of people. As someone who always gave the audience the best interpretation of what is happening on stage to the best of his abilities.”