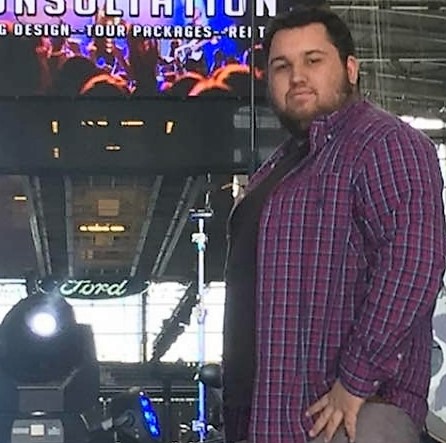 Crisscrossing the heart of America for the past two years with his sturdy collection of Rogues in hand, the energetic owner of Meitzner Consulting has been creating stunning looks for Billboard charting country stars like Aaron Watson and the Casey Donahew Band. Many of his clients consider this affable LD part of the band, which isn’t surprising because’’ a) his lighting wraps so tightly around their music and b) he spends so much time on the tour bus. Erich slowed down a bit to talk to us about Rogues.

When did you first use a Rogue fixture and what made you try it?
“I believe it was maybe two summers ago, I saw a bunch of them installed in a venue where we were playing. So, I gave them a try that night. I was pretty much instantly impressed by their output to size ratio. I loved them after that and used them on different tours by artists like Aaron Watson.”

How many miles have you traveled with Rogues since that time?
“Ha ha! That will take some serious time to figure out. Let’s just say countless miles. I traveled to at least 30 states with them. They are my road buddies. Some of them even have nicknames on their labels. “

What are their nicknames?
“We can’t put them in print!”

So with all of your touring, do you have trouble falling asleep on the tour bus?
“I happen to be very lucky in that I can almost instantaneously fall asleep when my head hits the pillow while we are rolling. I’ve even slept through hitting a deer. Once that bunk curtain is closed, I’m out like a light.”

What’s the best food you ever had on the road when touring?
“There is this venue in Texas called John T. Floores country store, I was just there a few weeks ago. They have the best tamales in the country, their tamales and the grilled cheese sandwiches are amazing.”

Speaking of favorites, do you have a favorite Rogue fixture?
“The R2 Wash, that little guy packs such a punch. Plus the pixel mapping. You can’t beat it.”

Do Rogues give your show an attitude?
“You bet they do. Those Rogue fixtures allow me to show off a variety of emotions during a show. Everything from very edgy to a nice subtle wash. I have definitely used them to expand the looks I create.”

So has Rogue changed the way you look at lighting design?
“Yes, I believe it has. It’s made a lot more creativity possible without sacrificing the practical factors that we all have to consider. I know that on tours that are one bus/one trailer I can get a large package, not take up a lot of space, and still get the feel of a “large” show.”

If lighting fixtures were dogs, what breed would Rogue be?
“A Border Collie without a doubt. That’s a smaller dog, lots of reneged behind it. Compact but a tough, smart renegade – just like Rogue.”