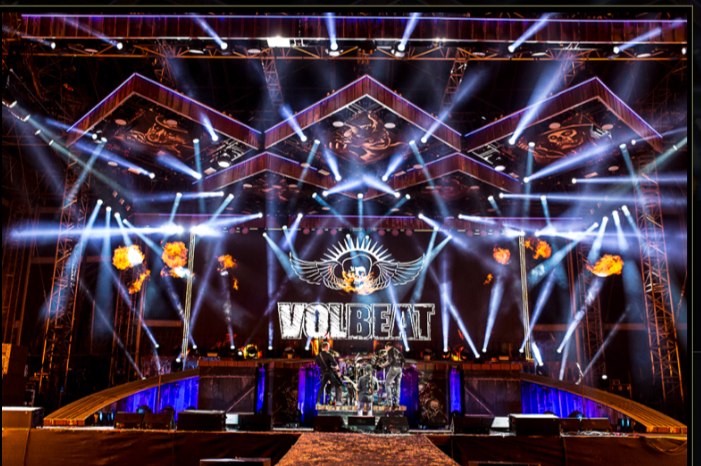 There is an inexorable narrative force that plows through metal music, just as aggressively   as the most ferocious guitar riff and thunderous bass. At their best, metal songs aren’t merely performed, they’re acted out, unfolding step by step with the gripping power of a drama. Like any drama, each song reveals more about itself at each turn, raising questions as it gives answers, igniting conflicts as it offers resolutions.

It is by venturing into this dramatic cauldron that Danish lighting designer Niller Bjerregaard finds the inspiration for his work. Demonstrating a remarkable talent for balancing the demands of lighting his clients’ music with the need to accent the drama that underscores their performances, Bjerregaard has earned widespread acclaim for his multi-faceted work for clients like Volbeat and King Diamond. Recently, he took the time to talk to us about the dramatic dimensions of metal lighting. 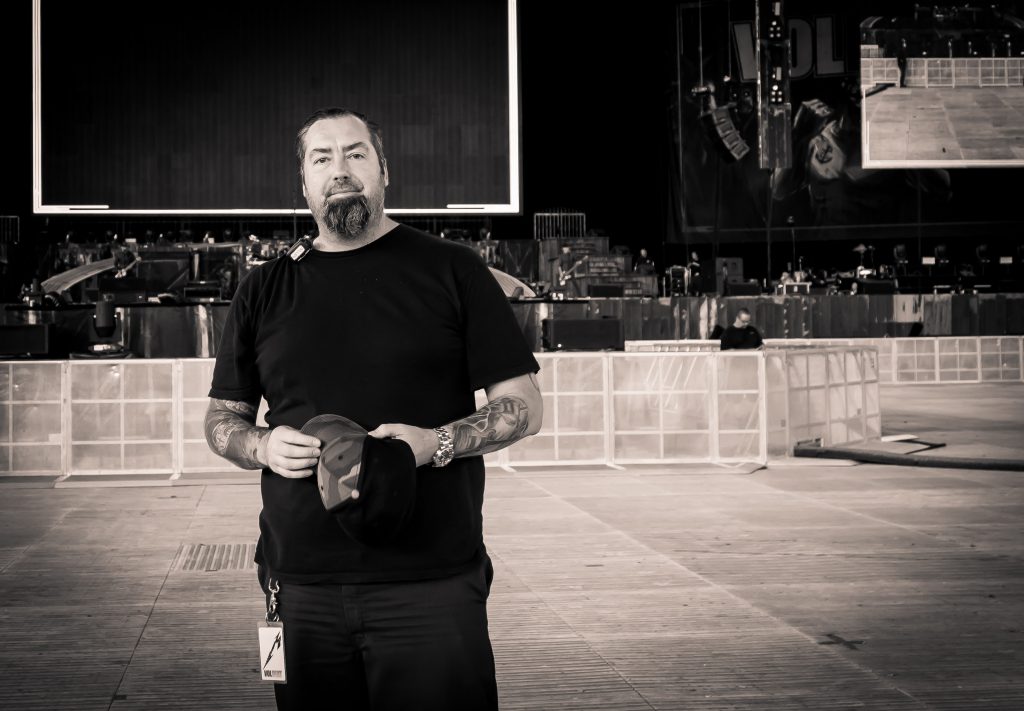 As you have demonstrated in your work for Volbeat, metal music seems to lend itself to theatrical lighting. Why do you think this is so?

“I think metal music often offers a more mystical and unique storyline than other music genres. It’s for me very exciting to dig down into the lyrics and the universe of theatrical metal artists and try to understand their way of thinking. I want to grasp the reasons for their vision and the music they make.”

As a designer, how does this inspire you?

“I often feel more free and inspired designing for a theatrical artist than a non-theatrical artist. If you look at Volbeat´s last album it’s filled with stories and characters that easily can be portrayed as physical objects such as drapes and video screens. For Volbeat, we built a stage set up for the storyline that Michael Poulsen had envisioned in his music. It had two elements in it. The first was the artwork of the album which was a mix between 1920´s bare knuckle fighting and a voodoo world. The second was a power struggle between the good and evil. I tried to envision a stage set up that contained those two worlds, so we built an old south swamp rusty looking barn-house. We have a very good artist Karsten Sand who makes Michael’s visions come to life, so I work from his drawings and make it fit the stage set up the best I can given budgets and tour size.” 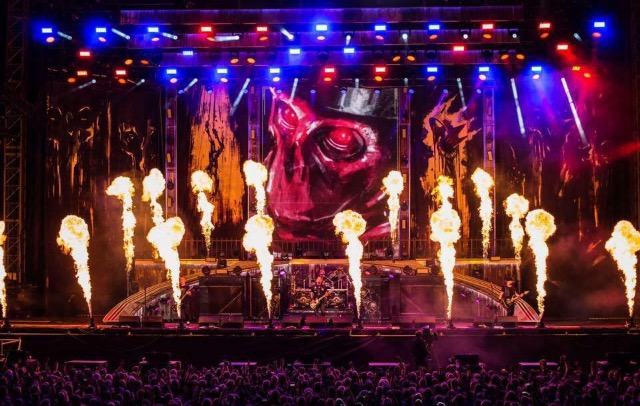 If you had to answer in just a sentence or two, what makes a good theatrical metal design?

“Depth is essential and a great idea brought to life that enhances the band’s performance.”

Can a metal design become “too theatrical” and then lose its sense of movement and power?

“I guess so, if the meaning gets lost in effects and over the top technical presentation. One has to remember that it’s about the music and artist, not how many moving lights or video screens you have on stage. You don’t want to be in a situation where you just go all in on lights and stop telling stories.”

How do you achieve the balance between creating a theatrical look on stage and creating movement with your lights that matches the music?

“I personally think that it goes hand in hand, if you have a great stage look you will quickly find a way to illuminate it and still be able to do effect lights and big looks on top. It’s all about balance between intensity, depth and purpose. The great thing about having physical set pieces is you can choose to light them or not in different songs. If those set pieces have no meaning in a specific song, you can rely on your effect light. I think once you go deeper into the music and performance it becomes clear how to get the best match.”

Suppose you were lighting pop music, would you take a different approach to theatrical design?

“It depends on the type of pop music I guess. If you look at most of the big pop artists they all have a theatrical approach to their show now and come out with big set pieces, video and huge light rigs. To be honest, I don’t think it’s about what type of music you light up, it’s more about if there is a story to tell. I think the time where metal music had an exclusive on the theatrical approach is over. Most audience listen to all genres of music and want to be entertained by cool looking stage set ups and effects and be a part of something unique.”

You mentioned the boxing ring design you did on your recent Volbeat tour. Do theatrical elements have to be literal this way, or can you be just as effective with more abstract theatrical designs?

“I think you can do both things. For me, it’s more about if you understand the meaning of the story or not. I’ll give you examples from Volbeat and King Diamond. 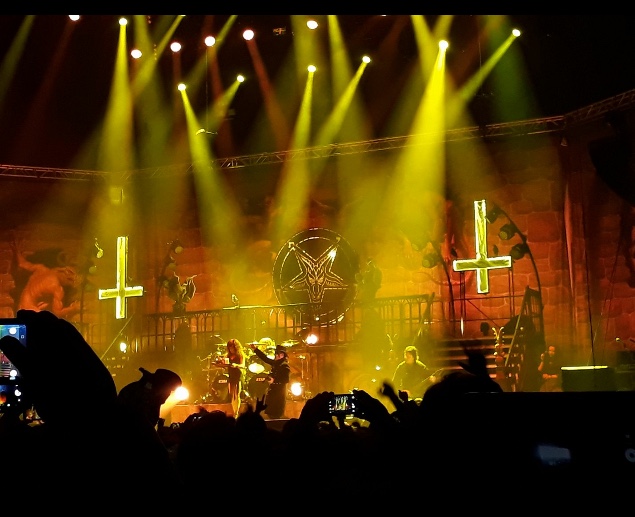 The boxing ring we had with Volbeat served three purposes. It was a catwalk that went down stage to the audience, which the band loved. It also housed a second drum kit. Then of course, the ring was a theatrical element for the show. So when you put the boxer character from the album cover and backdrop together with the physical boxing ring, it became clear that the struggle of the fighter is also the band and audience’s fight. So there is a common bond — the struggle of life. I think a lot of people like the idea that you are a part of a vision with the artist and you have something in common. It creates a feeling of belonging I guess.

“My work for King Diamond on the other hand was much more lyrical. King Diamond is very much about the lyrics and story, the physical elements is more in the background. Also a more old school light and theatrical design approach is needed for his shows. We have a lot of props, drapes and illusions that are built from scratch, carefully made to match different elements of the full concert. King is truly a visionary and can make you see the album portrayed right in front of you with gestures, reference and mimic topped of with a powerful stage look. Metal music, it’s so complex and exciting to watch!”

“The first thing I do is carefully listen to the album and look at the artwork. If it’s possible, I talk to the artist about the lyrics and concept. For some artists, this is a very sensitive topic and not all are willing to share their full story with you. Then I spend time basically imagining different looks and putting them on paper, first as a drawing, and then later in a 3D environment. I put the stage elements in first and when I have a look I like and I think fits the purpose, I’ll build from that. I find it easier to build the 3D stage first and then find the right lights to illuminate the set. The last thing I look at are the effect lights and specials.”

You have talked about how technology can be used as a crutch replacing theatrical elements in design, resulting in work that is less interesting visually. Why is that?

“It’s very easy to just use stock content for your video screen and think that looks cool without a thought of why. Without a meaning or a thought, what is it you are trying to tell the audience? In my opinion, you could just as well show a commercial or a movie at that point. You are better off hanging a backdrop and spending the time to program some cool light cues instead.”

But when done right, you can incorporate video walls into a design and still manage to be theatrical?

“Yes! Metallica and Avenge Sevenfold are doing this very much so. Trevor Ahlstrand, designer of A7X, makes a fantastic combination of props, light and video. Designer Rob Koenig of Metallica is doing this brilliantly on their tour. In the Volbeat camp we are also always trying different approaches to combine video and theatrical concept. Video can be a big help in coming across with your story and showing visuals that would be difficult otherwise.”

Do you think something is lost when a lighting designer moves away from theatrical elements and goes with more “flash” when lighting metal music?

“No, I think that the different approaches that LDs have are very exciting and fun to watch. Personally, I like a stage set up and light show that tells a story and you recognize elements from the album artwork, lyric or the t-shirt design, for me that’s entertaining. But everyone has their own approach.

”If an LD has put a lot of work and mind into a light/stage show, there are so many different products and ways to design. It’s more about having your vision come to life, as it takes effort and guts to be different and believe in your design and presentation of the show. Especially today, when media attention is so high and you get reviewed instantly. From when an idea is born to the final design is done you go through a process of doubt, stress and euphoria. In the end, when you know you’ve come up with something good, nothing beats that feeling.”

Do some colors lend themselves to theatrical designs more than others?

“I use to think so, but for me now it has become the combination of colors and depth. Of course some colors work better together than others, but everything goes in my opinion. Light is an art form and it’s up to the designer to give his or her version. It’s also about reading the song or mood that is portrayed on stage and underline it with the color you think enhances the audience experience. It’s like if you watch a movie and the music is scary it will set the mood, but if you showed the same scene with happy joyful music the mood would be very different. The same goes with colors.”

Do you have any other advice you want to share about theatrical metal design?

”Depth, cool stage look and a great idea that can tell an entertaining story.”