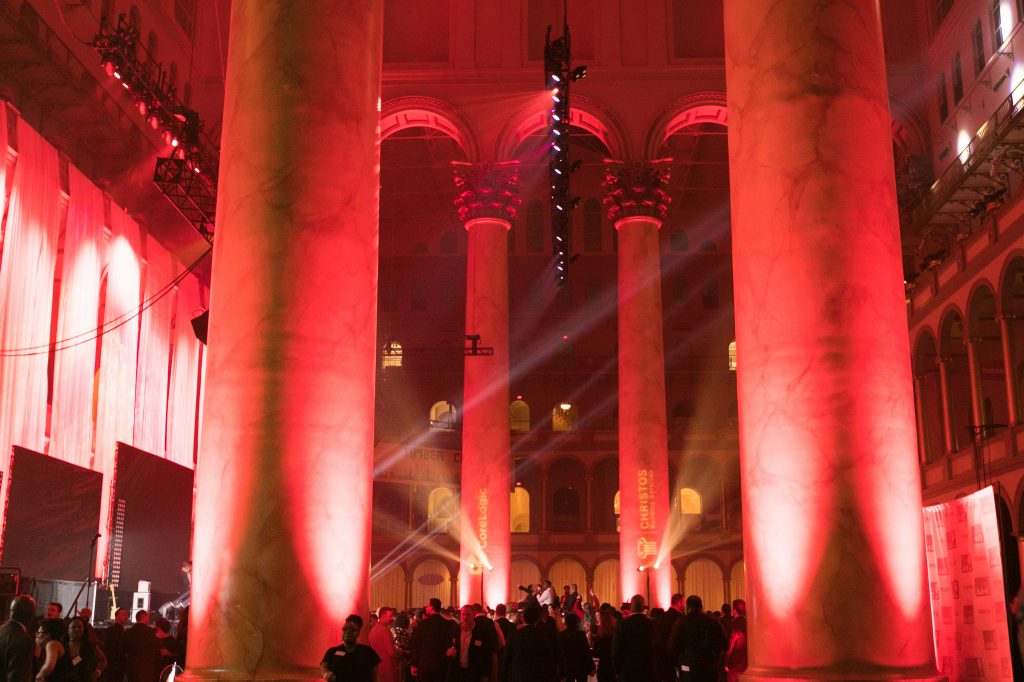 WASHINGTON, DC– Awe-struck. That sums up the feeling that visitors experience when they step into The National Building Museum. Located a short distance from the U.S. Capitol, the stately Italian Renaissance Revival structure that was built in 1887 is breathtaking in its scope and elegance. Its vast central hall has housed presidential inaugural balls from the time of Benjamin Harrison through Barack Obama. The Corinthian columns that line its great room are among the tallest in the world.

The Bozzuto Management Company, one of the leading real estate management companies in the U.S., recently held an employee award ceremony at the museum. Bozzuto Management focuses on creating extraordinary experiences for their residents and wanted to provide that same level of detail and care for their employees. To create this upbeat atmosphere, while accenting the building’s impressive architectural features, a multi-faceted lighting design by Brett Angstadt was anchored by over 120 CHAUVET Professional LED fixtures.

“When you create an event design in a building like this, it’s obviously very exciting,” said Angstadt of Showtime Sound. “At the same time, however, this is also a corporate event—so your design has to take that into account. You can’t simply light the building as a museum; you have to take care of the event aspect of the evening, which is why you need to have very flexible fixtures.”

Exemplifying the flexibility that Angstadt had in mind were the 60 Rogue R2 Washes in his rig. He positioned 20 of the RGBW moving heads on the upstage and downstage truss for stage wash during the awards segment of the event. Later, when the concert and party started, he set the Rogues loose, creating concert-like dynamics, color effects and aerial movements. 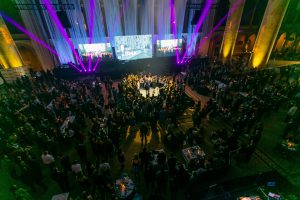 The remaining 32 Rogue R2 Washes in Angstadt’s rig served quite a different function. They were positioned around the building’s 80-foot-high Corinthian columns to provide dramatic uplighting. Angstadt used the Rogues to accent the columns in whites during the awards ceremonies; then turned to vivid floor to ceiling color washing during the entertainment segment.

“We had no problem covering the column with light thanks to the Rogue’s throw distance,” he said. “Light from the Rogues reached all the way up to the ceiling when we wanted it to, but sometimes we elected to illuminate only part of the columns for a more subtle look. When we washed the columns in color, they glowed quite vividly – it was really impressive.”

“I had the Nexus panels on vertical pipe towers outside and between the three video walls,” he explained. “I used them for architecture and as eye candy to engage the crowd during the party.”

The STRIKE 4 fixtures filled a more varied role. Positioned on upstage truss, they were used to engage the crowd during participatory moments of the awards ceremony; their warm white glow lending an added sense of intimacy to the proceedings. During the entertainment, they pumped up the crowd serving as audience blinders and strobes. “My client wanted a party atmosphere,” said Angstadt. “In addition to doing all of the other things they did, the STRIKE 4s gave us the big show punch we wanted.”

Although working in the museum provided plenty of creative opportunities, it also presented setup challenges according to Angstadt. “Being that this is a museum, we were limited in terms of how and where we could run cables,” he said. “Time was also a factor. We had to load in overnight the day before the gig. Then the museum was open from 9 a.m.-5 p.m. the next day, so we had a tight window to get everything up and running. Fortunately, we had a great team. Shawn Hocherl, the production manager for the event and Zack Bunner of Showtime Sound were great. I think all of us liked working in a building like this; at the end of the day it was a lot of fun.” 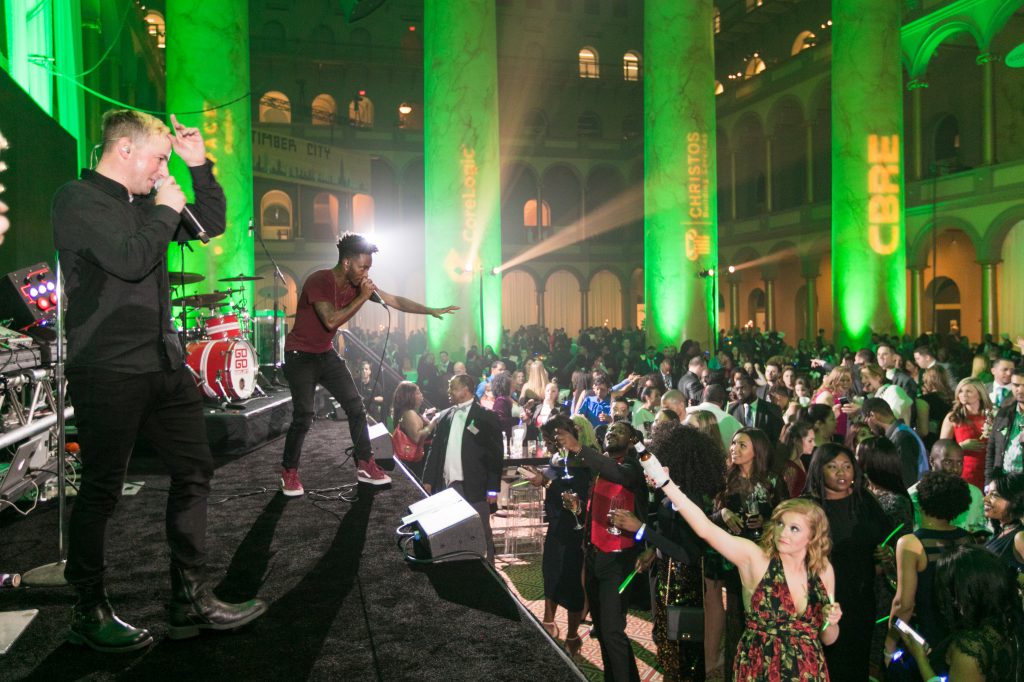