Country music fans who saw Maddie & Tae open for Lee Brice earlier this year were impressed by the rising young stars’ lively sound. Lighting pros who caught the tour couldn’t help but be impressed by another thing too – how many cool looks LD Larry Foote conjured up from a floor package that included only eight units of a single fixture.

Foote never seemed to repeat a cue as he went through a rich assortment of scenes using eight Nexus 4×4 panels, positioned on rolling truss structures, four on each side of the stage. Sure there were house rigs to draw on at different venues, and sometimes Foote would even use a few of the headliner’s lights, but mostly the engaging looks came from his handful of fixtures.

Impressed by Foote’s work, we thought his experience would hold some valuable lessons for other LDs who for various reasons find themselves having to create big-time excitement out of a small rig. He did indeed offer us some valuable tips, one of the most surprising of which was not to regard your limited rig as liability, but to embrace the minimalism and recognize that sometimes less can be more.

You did an excellent job with Maddie & Tae creating an interesting show with a limited number of fixtures. What is the “secret” to pulling off this feat?
“In that case, I started with a fixture that has multiple reversal elements so it helped me create memorable moments throughout the show. With the Nexus panels I was able to make a new staple look for each song and still create key moments as well as solo accents. Building the lighting element to the show is really key here. One simple color change can be the most impactful and memorable moment of a show.” 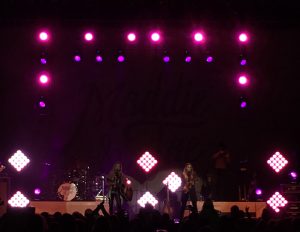 Maddie & Tae were opening for a big star so they were often playing at large venues. Does the size of the venue influence how you’ll approach the challenge of getting big looks out of a limited number of fixtures?
“Filling big stages with a minimal fixture lighting environment has been something I’ve been dealing with for the past couple years on tour. With that being said, I’m now more familiar with the pros and cons of opening on a larger tour but still being able to fit into a random club. I always check the venue sizes to make sure that the staging and lighting can morph to the always changing ‘B’ rig. M&T were allowed to use some of the headliners rig, so adding any extra lighting element to this rig dramatically enhanced the set. I made generic house lighting in MA 3D and programmed them into the show so I can easily clone, save time day of show, and maintain the desired look of the songs.”

When you have to limit your number of fixtures, you have to choose to give something up in your show. How do you decide what to give up?
“With M&T I wanted to do something different and I wanted to do something that would push me as a programmer. Some of the small venues forced me into a rig that may need to get powered off of wall power so LED was the obvious choice. I can do a lot with the Nexus panels so I knew I could make a show out of them being the primary fixture. The music, for me, will always change the way I design a lighting rig. For the design process though, I will usually try to add to something instead of take it away. Sometimes less is more.” 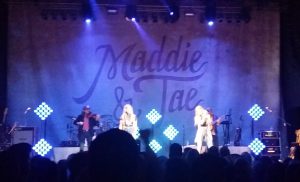 How do you avoid repeating looks in your design when you limit your number of fixtures?
“I tend to do this by building the design around the looks I can achieve, instead of the other way around. I like there to be a defining look to a design so people associate the overall look of the set to that artist. I do a lot of research on the band prior to getting started on the design, time permitting of course. Knowing the music well is such a vital part of the job.”

When you’re designing for an opening act, you have to consider load in and load out time. Is there any advice you have for speeding up that process?
“Make everything as simple as possible. Overthink every scenario because it will most likely happen at some point on the road. Having everything on stage roll with minimal cable breaks as possible will help with your set change and your overall in/out process. Most of the time, if an opener load out takes too long, it’s due to poor union/hand/volunteer direction or general crew load in/ out direction; something is incorrect logistically.”

Trailer space is another issue. What advice do you have on saving that precious commodity?
“Pack smart and learn how to make a CAD drawing of your lighting pack. It’s a good habit, easy to learn, and you can try to accomplish the best pack without loading and unloading your trailer. Also if you put a copy of it on the side of the trailer, it can help new people out. The more organized you are with everything, the easier and faster things will be.”