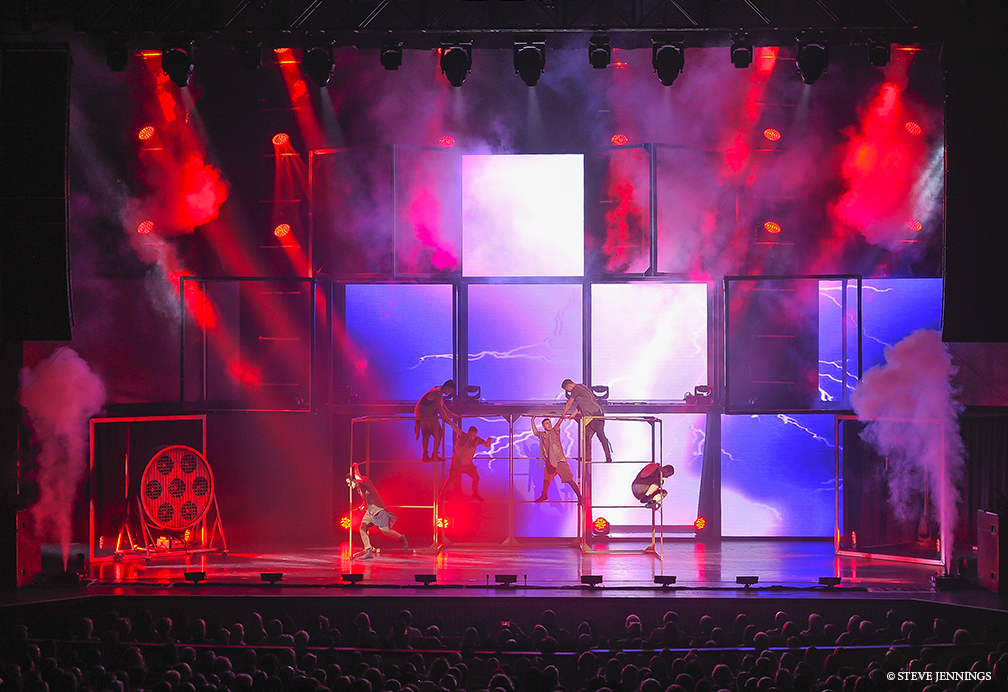 NEW YORK – In a newspaper interview, Derek Hough described the recently concluded “Move Beyond – Live On Tour” as a “rock concert for dance.” Hough, who with sister Julianne, danced their way into the hearts of Americans on the mega TV hit Dancing With The Stars, was as spot on with that description as he’s been with his tango sidesteps.  The dancing siblings coast-to-coast tour featured all of the fast paced intensity of a rock concert, including flashy costume changes, stunning scenic elements, non-stop energy and an immersive, colorful lightshow that utilized a collection of CHAUVET Professional Maverick MK2 Washes supplied by RKDE Lighting.

Peter Morse of Peter Morse Productions (South Lake Tahoe, CA), specified 14 of the RGBW moving lights.  He flew the Mavericks on FOH truss and used them for center stage washing. The fixtures’ wide zoom (7-49°) allowed them to cover a range of areas from their center stage position, while their 16 bit dimming provided smooth control of fades.

“The Mavericks performed well…quite bright; good color; great zoom range,” said Morse, who designed the tour’s impressive lightshow with a rig that fit into two trucks. One of the keys to Morse’s design were the smooth color changes – or “color morphing” that he created to reflect the different moods that ran through the show, which was choreographed by Derek and Julianne Hough in collaboration with choreographers Napoleon and Tabitha Dumo, also known as NappyTabs.

Morse also had a team of talented collaborators, including lighting director Alyssa Milione; Metallica LD Rob Koenig, who programmed the show with him; and Butch Allen of Blame Funnel Creative, who designed the set for the show. Dominated by a large matrix of cubes that ran across the back of the stage, and featuring multi-level platforms for dancing, the set made a powerful statement as it supported the Houghs and their backup performers from The Move Company Dancers through songs that ranged from a speedy remix of Ed Sheeran’s “Shape of You,” to DNCE’s “Cake by the Ocean,” to Whitney Houston’s “I Wanna Dance With Somebody.”

The show also featured eight Vesuvio RGBA high output fog machines, which were used to unleash colorful plumes at key moments during the performance. Running for two hours with an intermission, the show never held back as it thrilled audiences with simulated slow-motion, death drops, lifts, flips, and more. It was, as one of its stars suggested, a “rock concert” in the best sense of the term with a light show that matched it step for step in grace, intensity and sheer entertainment value.