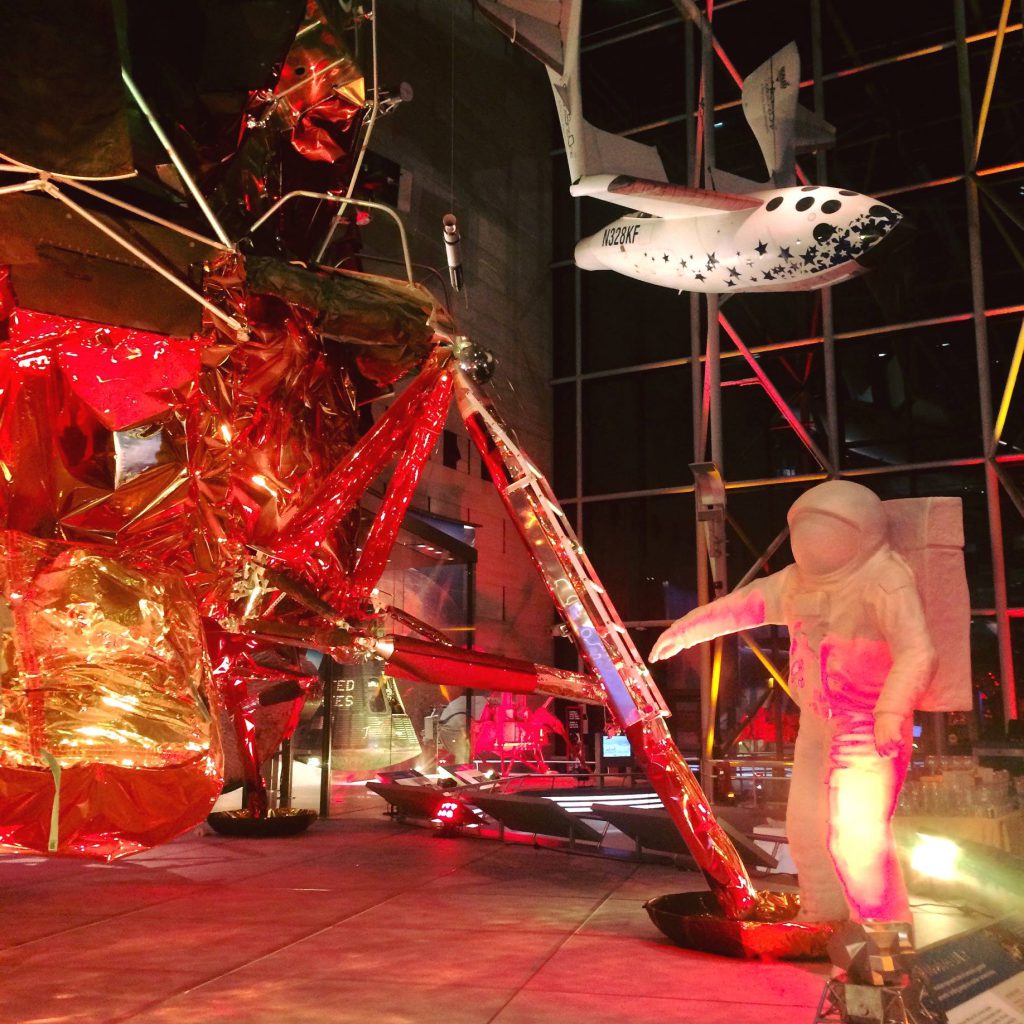 WASHINGTON – Even the most jaded visitors can’t help but feel a child-like sense of awe and amazement when walking through the Boeing Milestone of Flight Hall at the Smithsonian Institution’s National Air and Space Museum. Look one way, and they’ll see the Apollo 11 command module that landed the first astronauts on the moon. Beyond that there is the Spirit of St. Louis, the tiny propeller-driven plane that took Charles Lindbergh on his historic flight across the Atlantic. A little further on is the Wright Brothers’ original flying machine.

Lighting these historic artifacts and the hall houses them never gets old for John Farr and his team at John Farr Lighting Design. It’s something they’re done often, and are quite adept at, too. This was readily apparent in mid-December, when they used a collection of CHAUVET Professional Ovation and COLORdash fixtures to create an engaging design for a government contractor’s holiday event in the hall.

Farr’s lighting design, with its emphasis on red and gold holiday colors, seemed to flow naturally through the 700+-capacity event space, but like the iconic objects it illuminated, it was actually the result of meticulous planning and hard work.

Time constraints made detailed preparation essential in this project. Attracting over seven million visitors a year, the National Air and Space Museum is the most popular museum in the United States. As a result, load-in and setup time are severely limited at this venue.

“You can’t interfere with visitor traffic,” said Farr. “This puts a premium on time. This event started at 7 pm. Our load-in was at 7 am, but we couldn’t fully start setup until 5 pm. This didn’t leave much room for error. Everything had to be preplanned with as much pre-wiring and preprogramming as possible. Our fixtures helped us get things done in a timely fashion, because they’re compact, user-friendly, and in some cases, battery powered.”

The low power consumption of his LED fixtures also helped in this project, according to Farr. “This particular building is over 40 years old, and it is on the National Mall,” he said. “So, power is always a factor. Fortunately, LED fixtures have minimized or eliminated this issue.”

There are also issues created by the iconic artifacts themselves. Vendors are strictly prohibited from touching the objects. This made it essential to have compact fixtures with good throw distances.

Farr found these features in the 26 Ovation E-910FC ellipsoidal-style units and 36 COLORdash Par-Quad 7 fixtures in his rig. Positioning 15 of the RGBA- Lime ellipsoidal fixtures on 7’ pipe-and-base trees and outfitting them with 36° and 50° lenses, he used them to colorize truss bays and accent exhibits. The remaining 11 units were used to enliven the room with multi-colored floor lighting.

The nearly 40 COLORdash Par-Quad 7 fixtures in the rig were called upon to accentuate the rockets, which are star attractions at the hall. Taking advantage of these fixtures’ compact size (9.9 x 9 x 3.9 inches, or 252 x 228 x 100 millimeters), Farr was able to position them in hard-to-reach places, often close to rockets. This allowed him to get ample lighting coverage without violating the museum’s no-touch policy.

“We had over 230 fixtures out on this project,” said Farr. “Each of them had a specific purpose or several purposes going in, so we were able to put together a complete and multi-faceted event in a relatively short time.”

It was the kind of planning that would have done any aeronautical or space pioneer proud.