LONDON – At the recent double premiere of the 2018 post-apocalyptic adventure films Mortal Engines and Aquaman in London’s Leicester Square, the red carpet was suitably soaked in a fittingly post-apocalyptic two-day torrential rainstorm.

Fortunately, for movie fans who had turned up in droves to take selfies with stars like Hugo Weaving, Hera Hilmar and Robert Sheehan, the atmosphere on both nights was not dampened in the slightest, thanks in part to a large multimedia installation showing film snippets, custom created content and live action. IPS created the crowd-pleasing video screens with 106 PVP X6IP LED panels from CHAUVET Professional.

“The most complicated aspect of this particular project was that there were two different premieres on consecutive days,” explained Ian Brown, Project Coordinator at IPS. “Understandably, the designer and IPS client Limited Edition Event Design wanted to create two completely different looks to ensure there was a different feel to each premiere, while working within the logistical constraints of the site and shows.”

For the first show, the premiere of Aquaman, IPS supplied seven rigging towers, each supporting a 1.5m high by 2.5m wide screen made from X6IP panels. For the next day’s premiere of Mortal Engines, three of the towers were removed and the screens reconfigured so the four remaining towers each supported a 1m wide by 5m high screen, also made from the repurposed X6IP panels.

“The 6.9mm pixel pitch of the PVP panels provided us with an exceptionally sharp canvas upon which the custom content could be relayed,” said Brown. “The high brightness of the panels shone though the miserable conditions, with the wide viewing angle also ensuring ease of visibility on the square.”

Thanks to their solid aluminum die-cast construction and stainless steel hardware, the PVP panels could be effortlessly taken apart and reconstructed into their new formation on the second day, despite the less than ideal weather conditions.

“The rigging options made it easy to reattach the panels in their new formation to the rigging towers,” said Brown. “This was absolutely imperative for the limited timescale we had to work within.”

Other than the usual logistical issues involved in working in a public area in central London, the obvious challenge posed by the environment was the torrential rain. However, the IP65 rating gave the team at IPS full confidence in the all-weather capabilities of the screen throughout the days.

“As the rain and wind stepped up a notch on the second day, we were able to open the louvres on the screen panels to help reduce the affected wind area on the panels,” concluded Brown. “Thankfully everything worked flawlessly in some of the most unpleasant working conditions imaginable, and once again we were able to satisfy the demands of the client while ensuring a great spectacle for movie fans.” 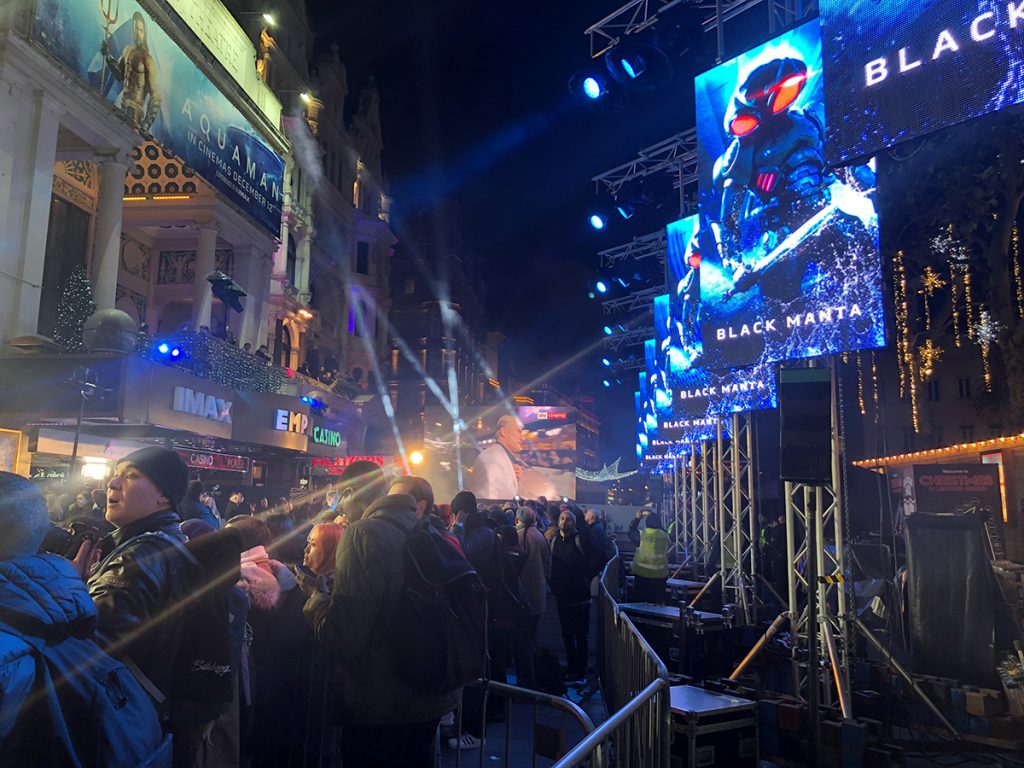