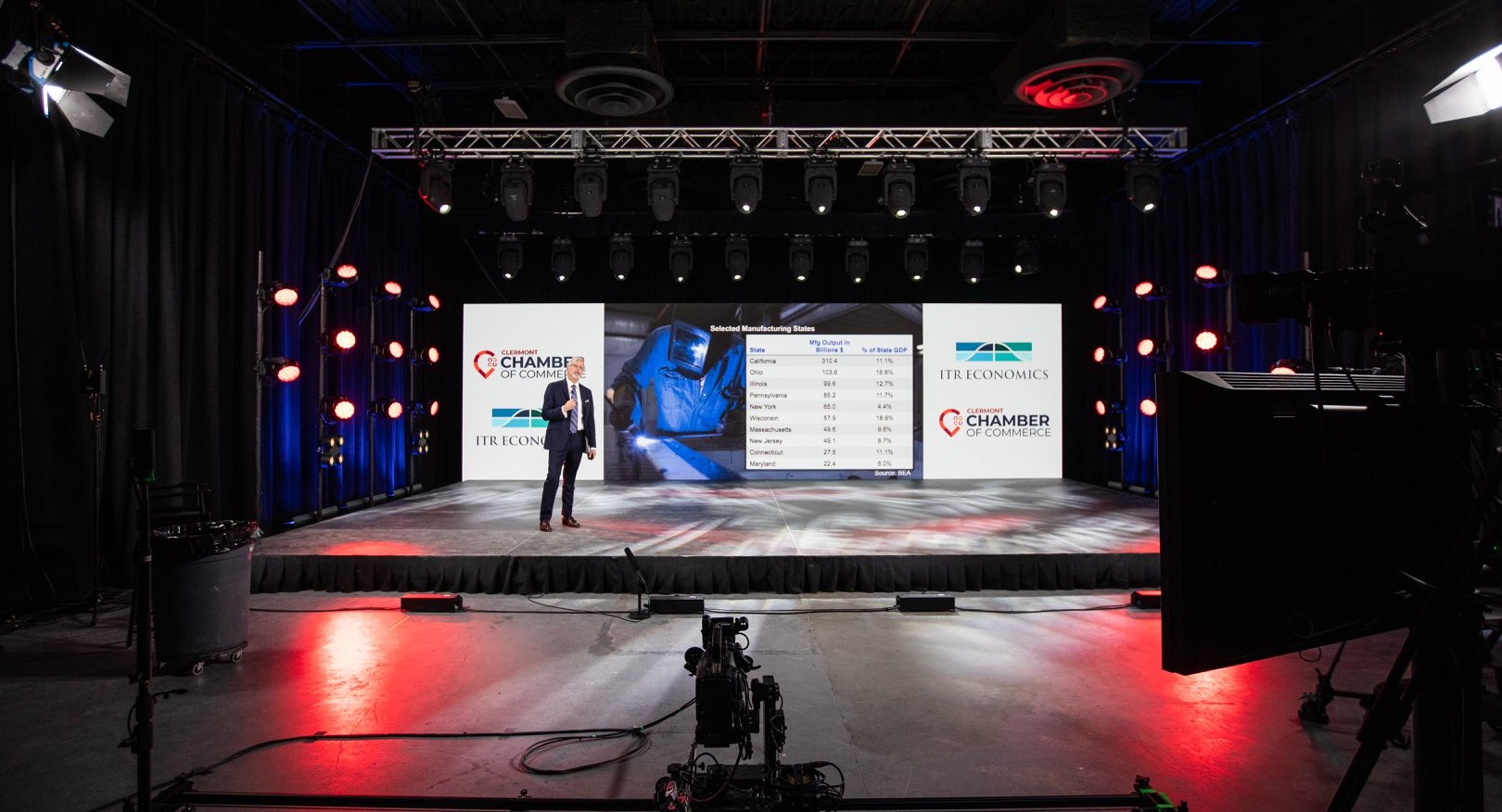 DERRY, NH – Stay at home restrictions have prevented the Clermont, Ohio Chamber of Commerce from holding its regular meetings. But now, more than ever, its member businesses are seeking guidance from the 50-year old organization, particularly on the steps they can take to navigate their way through this period of lockdowns.

A highlight of the chamber’s educational initiative was the detailed and informative April 8 livestream it hosted by noted author and small business expert Brian Beaulieu, CEO of ITR Economics. A former US Labor Department economist, Beaulieu delivered his presentation from the Events United Studio Lab, illuminated by a rig that featured Maverick MK2 Spot, Ovation CYC 1 FC, STRIKE 4 and Ovation E-260WW IP fixtures.

Beaulieu was able to communicate the intricacies of his ideas to the audience, located 900 miles from the New Hampshire studio, with the help of a large white video wall made up of CHAUVET Professional F2 panels.

Although the massive white space provided a supportive background for the economist to use when calling up the plethora of charts, graphs and tables that illustrated his points, it also presented a challenge for the team lighting the livestream.

“Brian wanted an all-white background, which complicated things a bit,” said Tim Messina owner of Events United. “We had to make the color temperature of the lights dead on so the white on the video wall matched their presentation, all while making sure the skin and hair tones stayed true on camera.” 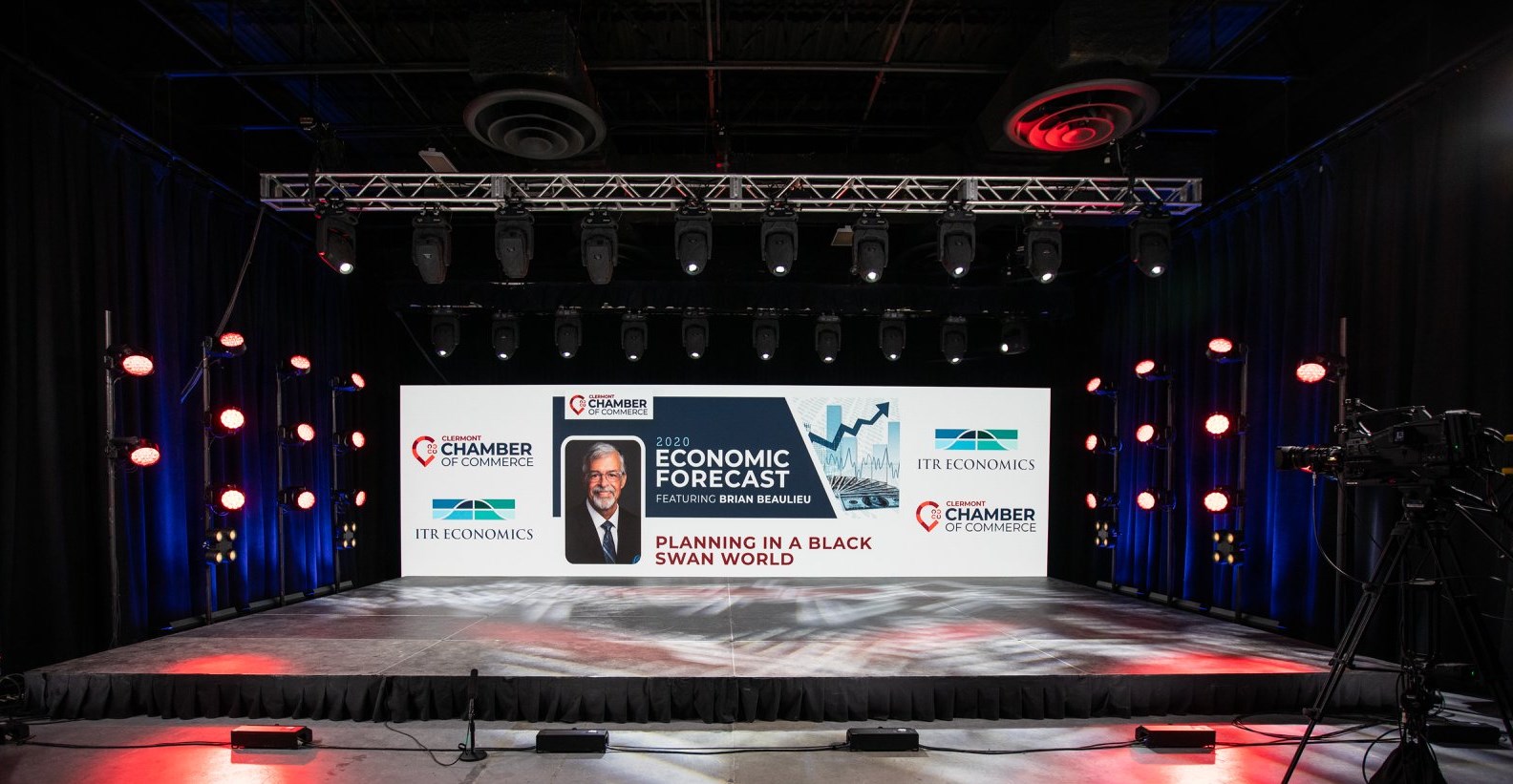 Accomplishing this feat began with matching the white of the video wall with the white background color of Beaulieu’s graphics. “We started with the slide color from the PowerPoint and used that as our base,” explained Jon Martell, Production Design Manager at Events United. “The slides were formatted by the client, to their desired color scheme.

Once this step was completed, the Events United Studio Lab team set the variable white temperature settings on the front lighting for the four cameras that were used in the video shoot. “We carefully checked skin tones,” said Martell. “If they’re wrong, the video becomes very distractive.”

Another essential design element that had to be controlled precisely was the brightness of the video wall, which Martell aptly describes as “a giant white backlight.” The Events United Studio Lab team brought the brightness of the wall down to 250 nits while still avoiding refresh rate issues with the cameras

“Throughout the livestream we watched the camera feeds very carefully to ensure that the amount of front light and hair light was at a level that made Brian’s face visible,” said Messina. “The hair light was essential, as it helped separate Brian from the wall behind him.”

Positioning most of their fixtures stage left and stage right, the Events United team at Studio Lab directed their output downward to create texturized patterns and color combinations on the ground. This lent interesting visual variety to the presentation without upsetting the delicately balanced output of the video wall.

By achieving this balance, the Events United Studio lab team contributed to a compelling livestream presentation, which left businesses in an Ohio town a 13-hour drive away better equipped to deal with current challenges. In the process, they demonstrated the power of livestreaming to bring communities together.