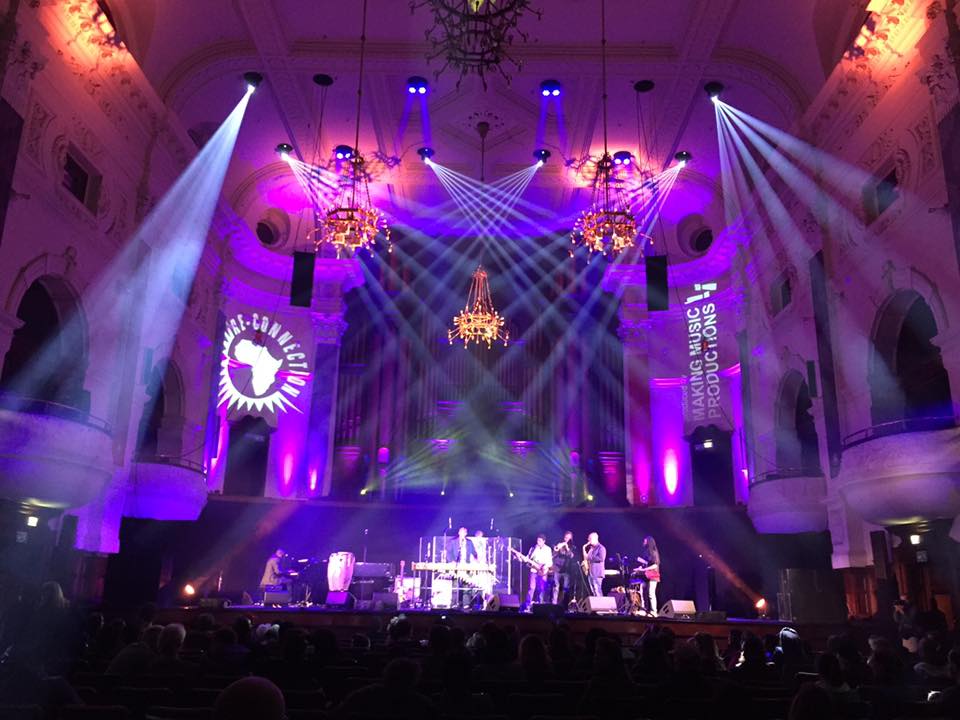 CAPE TOWN, SOUTH AFRICA – It may be called “City Hall,” but the imposing honey-colored limestone building in the center of Cape Town hasn’t housed municipal offices since 1979. It has, however, witnessed plenty of history and culture in the ensuing decades. Nelson Mandela made his first speech here from its balcony after his release from prison in 1990, and icons from all musical genres have performed in its ornate Grand Hall. Given the building’s historic significance and beauty, it was understandable that lighting designer Jean-Pierre Willson of Unfazed Productions wanted to accent the palatial structure’s architectural flourishes when he created a design for “Africa Day eKapa!” an annual Africa Day concert celebrating the anniversary of the Organization of African Unity. To help him achieve this goal, the LD relied on a collection of CHAUVET Professional Rogue fixtures supplied by Audiosure.

Willson used Rogue RH1 Hybrids, flown from the venue’s vaulted ceiling at a height of 82’ (25 meters), and Rogue R2 Washes, positioned on either side of the stage, to engage the audience and colorize the breathtaking surroundings. “City Hall is a famous and historic (built in 1905) structure in Cape Town,” he said. “The building is filled with beautiful architectural details. My brief from my client Steve Gordon and his team from Making Music Productions, which I wholeheartedly agreed with, was to let the beauty of the architectural space shine at this venue, and subtly light the performance area.”

Arranging the Rogue fixtures in their lofty ceiling position and high on side truss helped Willson bring out the building’s beauty when lighting it for Africa Day eKapa! “To me, lighting in a venue of this kind is all about layering and having the opportunity to light from the roof, stage, and upper balconies,” he said. “When I do this, it allows me to layer light and create dynamic looks. Then once I accomplish this goal, I can play with fades, pulses and subtle color changes to suit the music. Also because of the height of the ceiling, the movements of light from the stage through the audience to the roof were spectacular.”

Willson used two Rogue RH1 Hybrids, eight Rogue R2 Washes and 18 CHAUVET DJ SlimPARs in his rig, along with a collection of other spot and profile fixtures. “Audiosure showed me the Rogue RH1s before this project and I was very impressed with them, so we added them,” he said. “The RH1s were used to give dramatic top light, movement throughout the room, and soft downlight onto the artist.”

The Rogue R2 Washes in the Africa Day eKapa! rig were positioned four on each side of the stage. Willson attached four of the units on two 16’ (5-meter) truss towers and mounted four on the stage deck to use as cross lighting. “The light output is amazing on these fixtures, and the zoom also allowed me to cover the entire roof of the venue in between changeovers from act to act with saturated colors, which worked to engage the audience. Directing the light at the ceiling really gave everyone a deeper appreciation of this building’s beauty.”

Willson relied on richly colored lighting to accent another Cape Town City Hall scenic gem, the Grand Hall’s towering 32’ (10-meter) organ, which is located behind the stage. He positioned the SlimPAR 64 par-style LED fixture on the stage deck to upwash the 3165-pipe organ and its surround area, creating an evocative backdrop for performances by African artists like Fredy Massamba, Netsayi & Black Pressure, Stewart Sukuma, Dave Reynolds & Tony Cedras, and the Cape Town-based United Nations of Africa.

The seamless interplay between Willson’s rig and the concert venue’s scenic elements belies some of the challenges the LD and his team faced when undertaking this impressive project. “Rigging in the roof of a building that’s over a century old, and its heritage status as a protected national monument, requires some patience,” he said. “We developed a rigging clamp that goes over the opening holes in the ceiling and allows the light to protrude through to illuminate the stage below. It takes a while.”

In the end, though, the results were impressive. Making Music Productions and Unfazed Productions won widespread praise for their sensitive treatment of a historic venue while pushing the creative envelope to support the artists on stage, while also giving audiences a deeper appreciation of one of Africa’s most aesthetic architectural treasures.