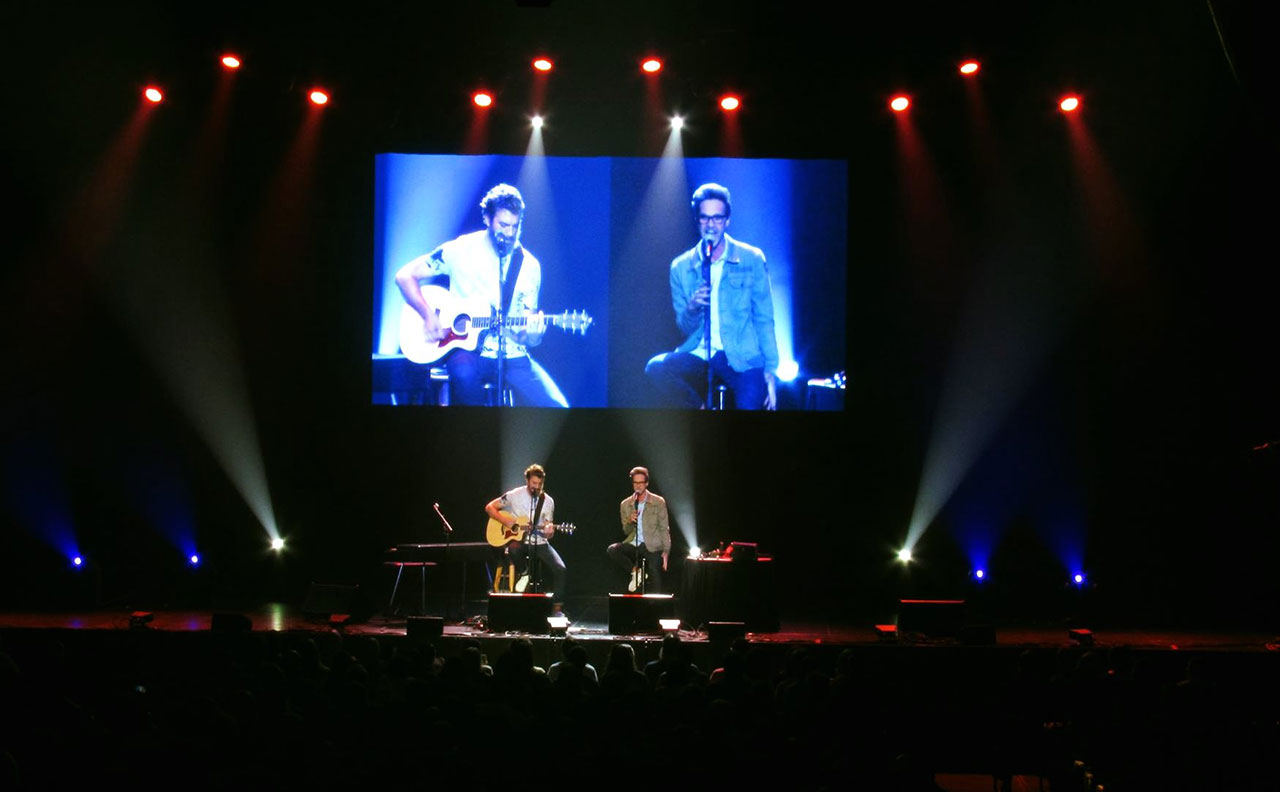 NEW ORLEANS, LA – Rhett McLaughlin and Charles Lincoln Neal III met on September 4, 1984 as first graders in Buies Creek, North Carolina. They haven’t stopped making people laugh since. Known to their ever-expanding fan base as “Rhett & Link,” the award-winning duo has been blazing a new path with their catchy mix of music and outrageously unique comic antics. (Their singular skits include “rap battles” that feature unlikely antagonists, such as the Wright Brothers vs. the Mario Brothers and Leonardo Da Vinci against The Teenage Mutant Ninja Turtles.)

Lighting this thoroughly original pair of comedic musicians on tour requires a design that is powerful enough to accent punch lines and ballyhoo moments, while still serving up softer, subtle looks that create theatrical moments for sketches. This is precisely what the design team of Rebecca and Bryan Hairston delivered for Rhett & Link when they stopped at the iconic Saenger Theatre in New Orleans recently. Helping them were a group of CHAUVET Professional Maverick, Rogue and Ovation fixtures supplied by See-Hear Productions.

“Everything came together for us at this stop on the tour,” said Bryan, who, along with Rebecca, owns Hairston Touring Productions. “We used the Mavericks to create some sculpted theatrical looks on stage one moment, while providing some really punchy looks the next.” 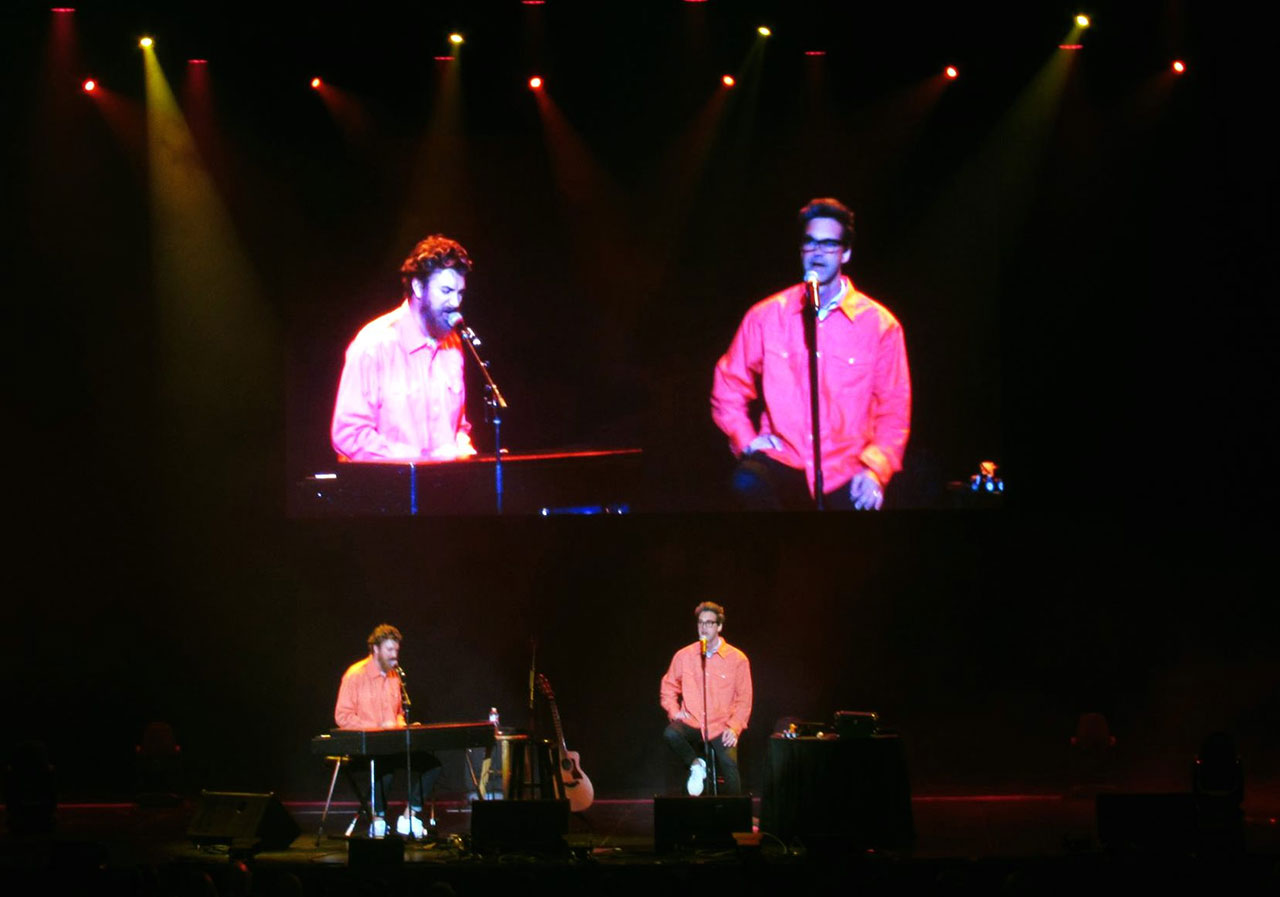 The Hairston’s rig featured 20 Maverick MK2 Spot fixtures, ten Rogue R2 Wash units, and six Ovation E-910FC ellipsoidals. They flew 12 of the Maverick units, along with the ten Rogue fixtures and four of the Ovation ellipsoidals, on overhead truss. Drawing on the six position rotating gobo wheel of the Maverick MK2 Spot, they used the 440W LED moving fixture to create mood-setting patterns on stage. At other points in the show, they relied on its intense output to serve up concert-style looks.

Complimenting the intensity of the Maverick units was the smooth color wash from the Rogue R2 fixtures. Also contributing color to the stage, in addition to key lighting the artists, were the RGBA-Lime Ovation ellipsoidals. The remaining eight MK2 Spot fixtures and two Ovation E-910FC units were placed on deck, adding further depth to the middle of the stage.

“Having Rhett & Link on stage by themselves, with only a few instruments here or there, meant we had to focus the audience’s attention on the performances using positive and negative space,” said Bryan. “Most of the show is spent down center, so we approached those sections with a storyteller’s vibe, which created a more intimate environment in addition to being great for tight split screen camera shots. However, for the ‘rap off’ section of the show, we wanted the lighting to feel like a realistic hip hop performance, while still having a few funny moments.” 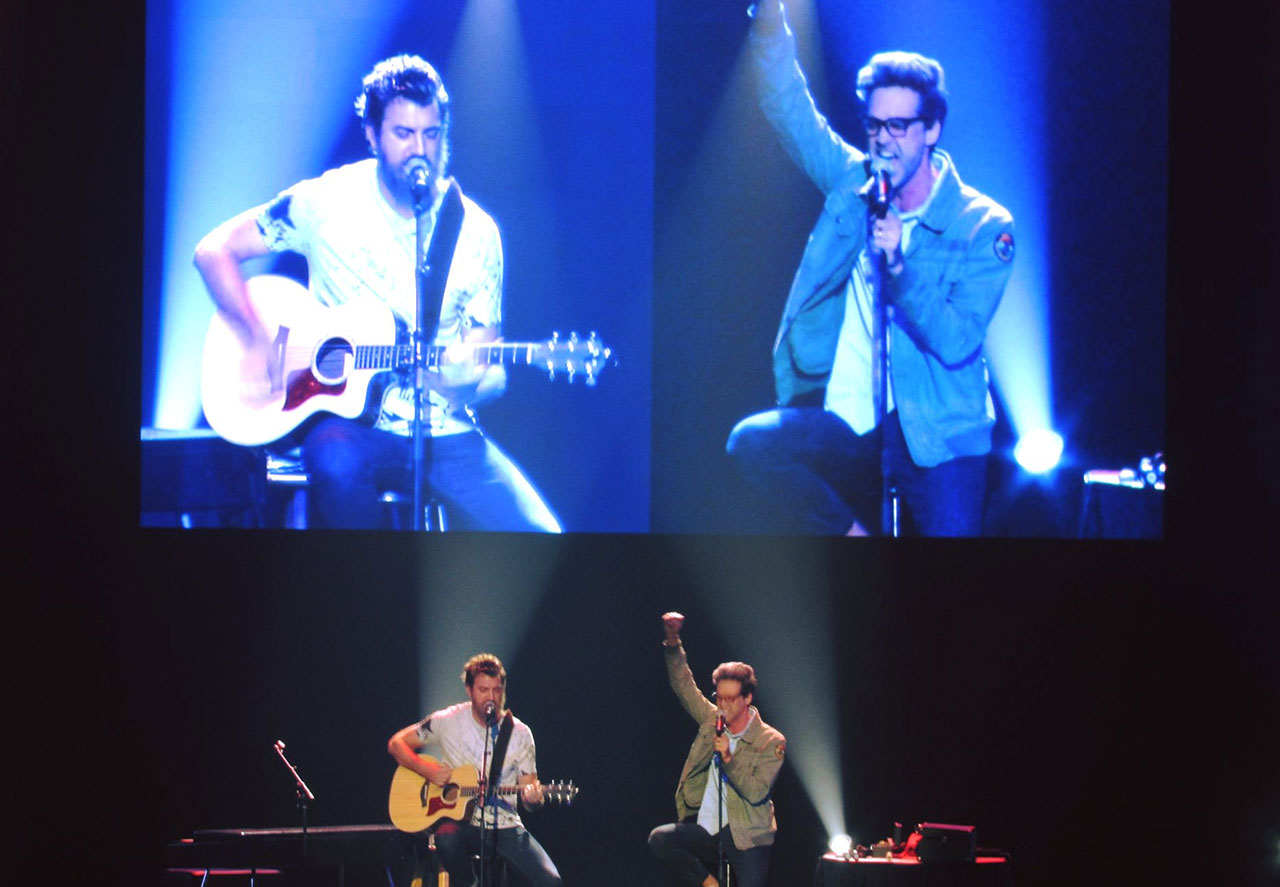 With tight closeups of Rhett & Link showcased on a large split screen video, it was important for the lighting to carve out the duo visually when they were in front of this wall. The Hairstons used the Ovation E-910FCs to shape the direct environment, establishing front and back specials via profiles on the performers. The Rogue fixtures were used for front and back washes and to smooth out any unwanted shadowing.

The Hairston’s had worked with Rhett & Link on a prior show and had a good rapport with the two artists, tour manager, Gary Waldman, and production manager, Matthew Sandowski of Tour Pro Logic.

“This entire team was great about bringing ideas to the table on how we could use lighting to augment the comedy, like trying to mimic Kendrick Lamar’s iconic MTV VMA performance for the hip hop section,” said Bryan. “The more realistic the hip hop lighting was, the funnier Rhett & Link’s version of it became! The lighting at the Saenger Theatre in particular provided one of those serendipitous shows where everything came together just the way we planned.”