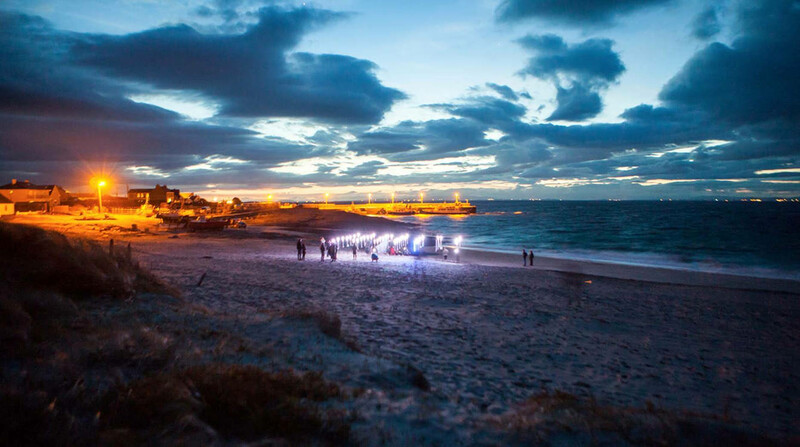 INIS OÍRR, IRELAND – At the mouth of Galway Bay, lay the three Arans, windswept islands perched between the vast sea and the continent of Europe to the east. Suspended as they are at the edge of two worlds, these jagged outcrops create a lineal space where past and future float side-by-side in the salty mist.

Drawing its name from a phantom island depicted in Irish folklore, HyBrasil covers a 18m by 18m area at the water’s edge of Inis Oírr, the smallest island in this magical archipelago. The unique installation’s 3D form of glowing light floats, glimmers and flashes — then disappears with the tides, presenting an ever changing vistas of brightness and shadow upon the sand.

“HyBrasil represents the lost island of our imagination,” said Murray. “This creation was originally conceived for the Drop Everything Festival on Inis Oírr. It was installed on a beach so that at high tide the support framework would be immersed in water and the piece would reflect off the water. Then, when the tide goes out the texture changes back to sand.

“This is our secod reiteration of HyBrasil, which was constructed in Westport,” he continued. “For HyBrasil ll, we wanted the sculpture to interface with both sea and the town,” he continued. “The piece was located on a pier in Westport town beside a small tidal lake, with water to the side and Mountain Croagh Patrick as a backdrop. This iteration of the sculpture is on a diamond of sand. The support frame and lights make up a 14m x 14m grid with a 2m spacing.”

Winner of the prestigious Kinsale Shark Design Award, the HyBrasil sculpture is supported by a frame Murray created with Unistrut, a Meccano-like support structure for electrical and mechanical installations. He designed the customized connectors to allow each unit to be made perfectly vertical using just three bolts.

The EPIX Strips that make up the beguiling structure display light and a 10-minute video animated to accompany a custom sound-scape created by Mike Glennon. Animators Brian Kenny of Lightscape and Anthony Murphy created the video in Cinema 4D, which was played back in MadMapper on a Mac Mini and sent to the one-meter long LED strips via ArtNet.

“Given that the show took 49 universes of ArtNet, we used Unicast in MadMapper to keep the frame rate high,” said Murray. “The Mac Mini had an internet connection and the sculpture and control system were monitored remotely using TeamViewer. Animators Brian and Anthony outputted content in a 3D perspective render so content director, Tom O Dea could preview what the content would look like on the finished sculpture. Once the piece was fully created, the video was split into seven slices placed side by side, which resulted in a 100 pixel high, but quite wide, video.”

Murray specified round milky diffusers for the EPIX Strip IP fixtures because they provided a wider range of viewing angles and contributed to the harmony between HyBrasil and its environment. “On the low brightness level that you get with the milky diffusers, the light is more defined almost as a soft round pixel,” he said.

When the intensity of the EPIX Strip IPs is turned up, however, the diffusers prove their worth even more at HyBrasil, as their volume plays off what Murray calls “the atmosphere of the sea air.” It is at such moments that light and air become one, and in so doing reflect the true spirt of one of earth’s more transcendent spots.