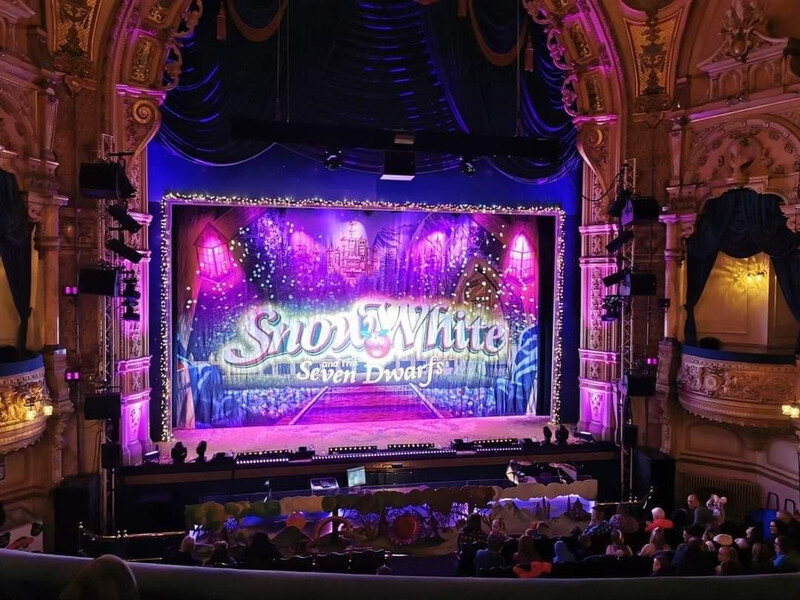 BLACKPOOL, UK – Ollie Wilkinson could have been forgiven if, at times, he felt as if he were being pulled in as many directions as “Doc,” leader of the Seven Dwarfs when he was putting together the lighting rig for the Panto performance of this Brothers Grimm fairytale turned Disney classic at the iconic Grand Theatre.

“I took on many hats with this project,” said Wilkinson. “One of the first was to prep the equipment at Arranpaul’s warehouse for the show, and coordinate with the venue regarding the rigging and weight of the equipment that was being flown on their mother grid. My next role was to manage the load-in team to ensure the equipment was placed, rigged, and cabled ready for the first day of technical rehearsals. I also specified the CHAUVET Professional Net-X,  one main and one back up, to provide key ArtNet control.”

Of course, given the long COVID layoff, Wilkinson didn’t mind all the activity, especially when he saw the final product, a wonderfully joyful retelling of the classic tale filled with exuberant singing, dancing, comedy, and zany costumes, all supported by a vibrant lighting design that not only transformed the stage but also covers the entire four-tiered theatre and everyone in it with colorful light.

The lighting reflected the true spirit of panto in all of its freewheeling glory. Wilkinson credits his Arranpaul colleague Thomas Beattie with making these transformative visuals come to life. 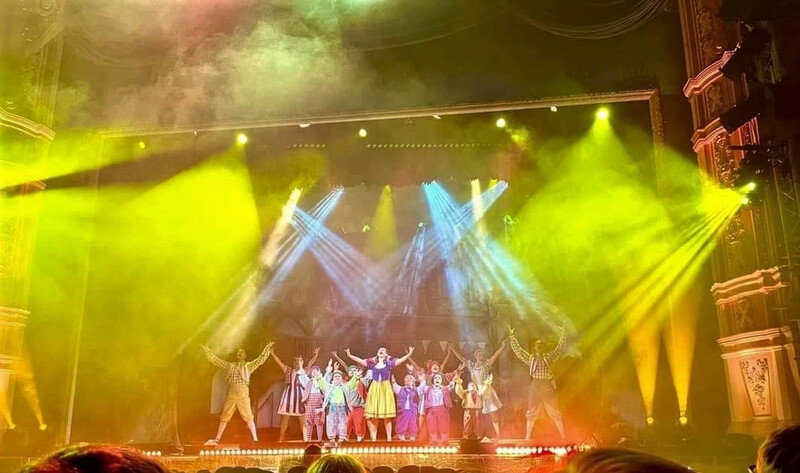 “Once the rig was up in the air, I stepped into the role of Associate Lighting Designer and Programmer, whilst Thomas served as the designer,” said Wilkinson. “We have worked very closely together over the past 15 years.  We both have the same workflow when It comes to designing shows, So in this situation, two heads were better than one.”

Those two heads served this production of Martin Dodd’s Snow White and the Seven Dwarfs pantomime very well. So too did the color rendering and gobo producing prowess of 44 CHAUVET Professional fixtures from Arranpaul’s own inventory.

In addition to evoking famous (and sometimes scary) dramatic scenes within the Snow White story, Beattie and Wilkinson also had to support the musical interludes with more fanciful breezy looks, all the while ensuring that the stage was also primed with some over-the-top visuals for the comedic musings of Steve Royle (Muddles) and Vicki Entwistle (Evil grandmother). Toward this end, they created over 500 lighting cues, ensuring that the show would be supported by a diverse array of looks.

A collection of 28 MK3 Wash and 16 Maverick MK2 Spot fixtures played critical roles in their design. Flown over six lighting bars above the central stage area, the MK3 washes were used to provide a colorful framework for the stage. Thanks to the 27 RGBW 40 W LEDs present within each fixture, Wilkinson and Beattie could weave blankets of vivid, saturated color into each scene, simultaneously providing a scenographic basis for the unfolding storyline. 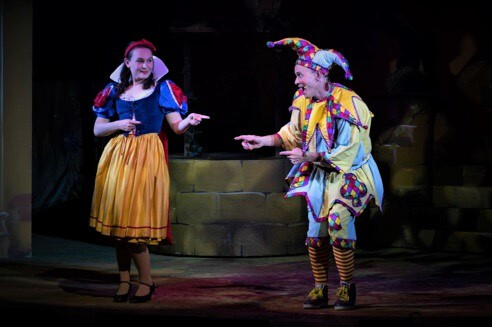 “The MK3 Wash gave us the ability to project saturated, almost glowing light over the stage and onto the performers themselves,” commented Wilkinson. “From strongly saturated greens depicting forest scenes all the way to soft warm white pastels to create the impression of daylight on stage, color was one of the key tools with which we could visually narrate the show.”

Complementing the layers of color with accentuations and textured additions, the MK2 Spots were spread across four overhead trussing beams, in addition to being rigged onto the upper balcony of the venue. As part of the intricately planned show, Wilkinson and Beattie drew upon various features of the Maverick Spot fixtures, such as the 3-facet prism and slot-and-lock gobo wheels, to create overlapping patterns and focused character accentuation.

During the musical and dance sections of the show, the team was also able to exploit the 14.7º – 40.5º zoom range of the Spot fixtures to create tight beams of light, which, especially in combination with haze and smoke effects, was helpful in focusing attention on key performers with their Snow White costumes. 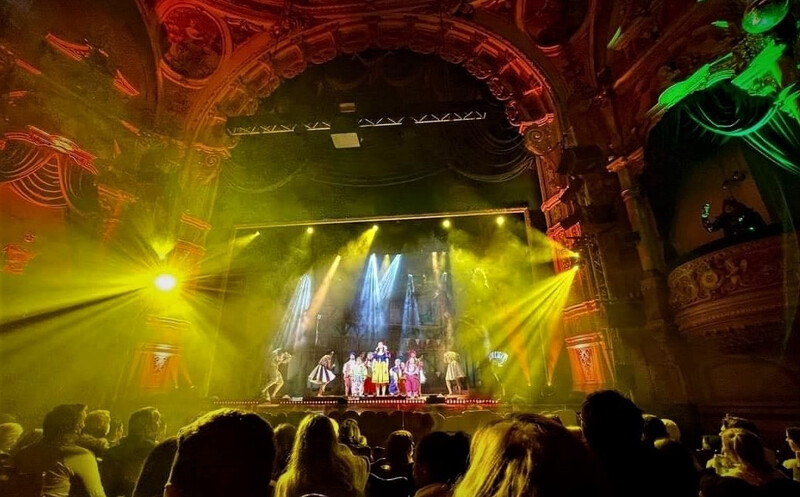 “The wide zoom range of the Spots gave us the ability to highlight and accentuate characters, and the smooth 16-bit dimming made for excellent visual variations during the show,” continued Wilkinson. “The CMY mixing of the MK2 Spot blended perfectly with the RGBW color mixing of the MK3 Wash fixtures. Normally I would find myself having to compensate between CMY and RGBW fixtures to ensure they are properly color matched, but with the Mavericks, the colors and dimming curves were spot on.”

The successful run of Snow White and the Seven Dwarfs gave everyone involved a sense of accomplishment and relief after the long COVID lockdown. “I’m very thankful to the guys at UK productions for the opportunity and Technical Stage Manager, Dave Renwick for all the help,” said Wilkinson, noting that getting back to theatre after such a long layoff was like “a dream come true.”

Or in this case, perhaps a fairytale… and a very funny, colorful, and brilliantly lit one at that!