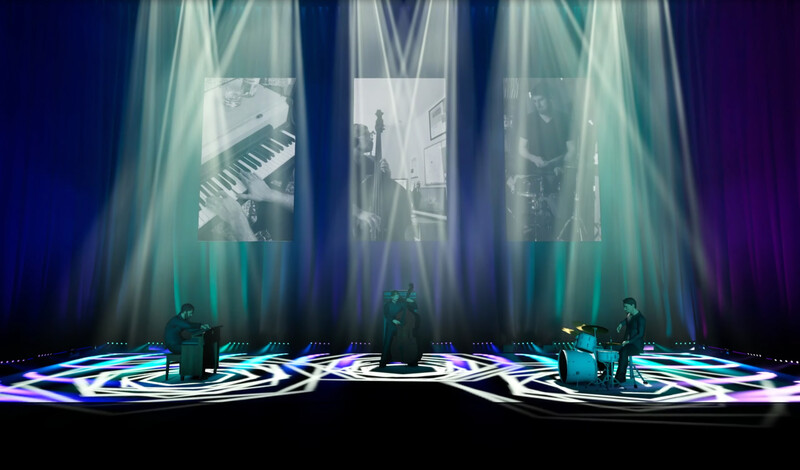 DENVER – Disco Biscuits founding member Aron Magner has told interviewers that he invited bassist Jason Fratacelli and drummer Matt Scarano to form Spaga, because he wanted to get back to his roots as a pianist. As anyone who’s listened to the trio’s silky jazz infused melodies since they began playing together in October will readily attest, he’s done this in beautiful fashion.

Spaga may draw inspiration from deeply embedded roots, but the band also isn’t shy about pushing forward in new directions, both musically and in terms of performance platforms. The latter was very evident earlier this summer when they played an impressive virtual set on a 3D stage at Quarantine Comes Alive, a one-day fundraising festival, presented by Live For Live Music, the COVID-19 Relief Fund, and nugs.tv.

Andrew Cass of C2 Design & Drafting created the virtual show, supporting the band with immersive looks that flowed as seamless as the music on their two-song set. Lighting the virtual performance was a collection of 75 CHAUVET Professional fixtures.

The creative process behind the virtual production began in April when each band member took 16 photos of himself from different angles while in quarantine. Working with animator Arielle D’Ornellas, Cass used these photos to create 3D renderings of the musicians.

“I have been struggling with realistic looking humans in 3D for some time now,” said Cass. “This led to us having the different photos taken. Arielle, who is not only a friend, but also a very talented animator, used them as the basis for creating the real to life renderings that were the basis of our 3D images.”

Cass also had the band members take videos of themselves at home. This footage and the 3D images were merged together in a compelling virtual stage set that artfully balanced the “real” video images with the realistic renderings. The videos were displayed on vertical screens that ran across the backdrop, while the 3D “band members” played their “3D instruments” on the virtual stage. 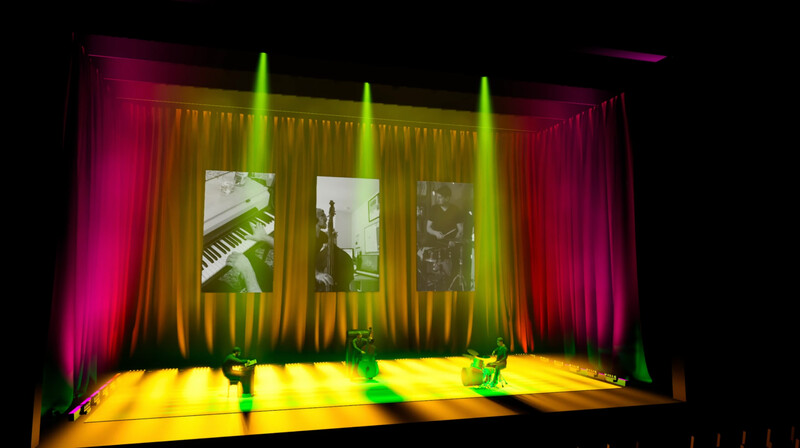 Accenting the scene on stage and tying the video and 3D images even more seamlessly together was a dynamic light show that moved naturally with the graceful flow of the music. Crisp gobo patterns and vivid shafts of light enhanced the sense of dimensionality on the 3D stage, while the vividly colored washes provided an arresting contrast to the black and white video images of the band members along the backdrop.

Color and patterns were furnished by six Maverick MK2 Wash units on the overhead rig, with one being position directly over each musician, as well as 27 Rogue R1 FX-B fixtures arranged along the bottom of the curtain on the inside, and 27 COLORado Solo Batten units matching them outside the curtains. Also included in the rig were three Ovation E-910FC ellipsoidals (used as front lights) and 12 Maverick MK3 Spot fixtures in the air, six mid-stage and six upstage.

Although lighting was critical to creating the right mood on the virtual stage, the fixtures themselves remained mostly out of sight, particularly during the start of the show. “With this project I wanted the lighting to be ‘hidden’ at first and the initial focus to be on the video walls,” said Cass. “Then, as the show progressed, I introduced lighting the elements. The Spaga project has a minimalist and modern look with its logo and media, so I wanted to mirror that. I thought a large and visible rig would be too industrial looking.”

The virtual concert took place in a room Cass created primarily from Google 3D Warehouse, modifying it to fit the needs of the project by adding elements like an arena ticket counter, a curtain, and balcony rails.

Syncing up the cameras in the 3D environment was critically important to creating the realistic show. Cass did this by putting the audio track into Ableton Live and having software output the audio along with a timecode signal. He then dropped the camera shots into Resolume and offset them to the timecode signal.

“The crucial factor in this process was to sync them after the video had been routed in the 3D environment using NDI,” said Cass. “This was important, because all of these steps add some level of latency. So, by syncing them after all that was done, we ensured that the videos stayed in time with the audio in the final product.”

On the subject of camera angles, Cass noted: “I’ve been doing these 3D renders of songs for many years and generally the goal is to show different production elements throughout the song by positioning the virtual camera where and when the elements look best”

Cass has also been doing live performances for quite some time. He points out the overarching goal is always the same, whether a concert is live or virtual: “to show the best attributes of the artist and the production.”

However, he notes that there is also an important difference. “In a live show, there are many elements I have no control over,” he said. “But in a 3D world, I can control everything — including the environment.”