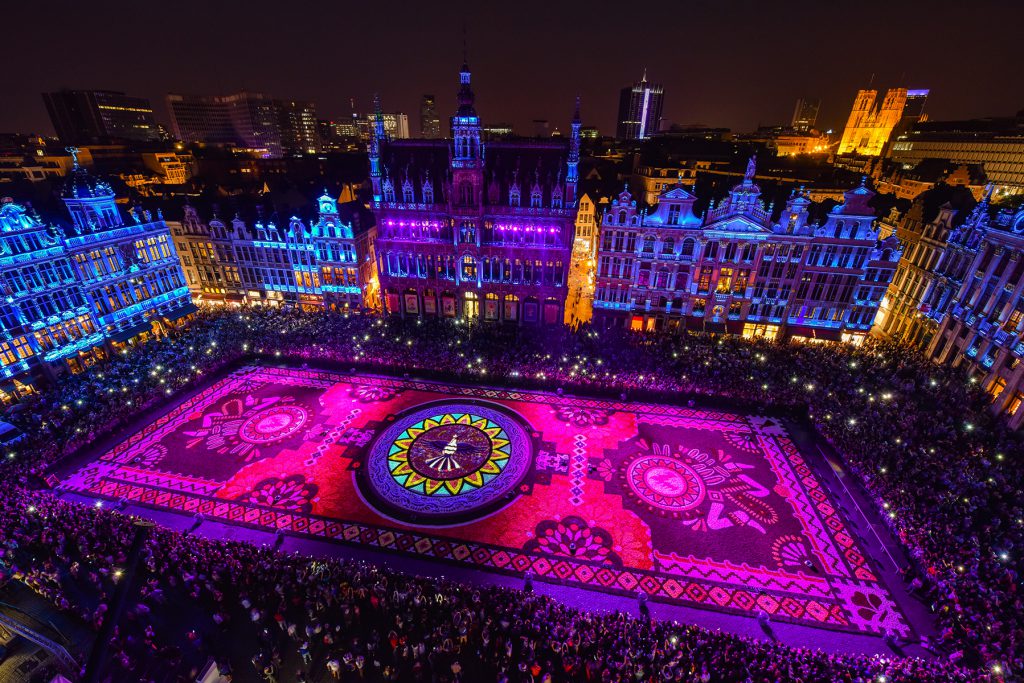 BRUSSELS – Once every two years, Brussels’ Grand Place, arguably the most beautiful town square in Europe, becomes even more breathtaking as its cobblestone surface is transformed into a magnificent carpet of color by over a half million flowers. Artfully arranged in an intricate design, the floral panorama flows gracefully, softening the gilded baroque buildings that surround it to create a vista of almost mythical beauty.

Like most enchanting creations that seem to spring forth naturally, the Biannual Flower Carpet at the Grand Place is in reality the result of intensive planning and hard work. In 2018, a team of 200 volunteers labored for six hours to install the carpet the day of the event. Illuminating their efforts and tying the floral display into the square’s historic buildings was a carefully developed lighting design by Geoffrey Oelbrandt of Studio Artfex that included CHAUVET Professional Rogue R3 Wash fixtures, supplied by Deltarent.

“Despite the beautiful historical location, it’s a remarkable challenge to generate a technical production for a flower carpet of 70 by 24 meters,” said Oelbrandt, who also lit the 2016 Biannual Flower Carpet. “The technical installation has to merge into the surroundings, being very discreet, while still producing a maximum effect.”

Although the load-in for the event was relatively short — all was installed in one day — the programming of the LEDs on the square’s buildings took two days. “The last night before the opening, we finalized the entire show, said Oelbrandt. “Our LO Glenn De Clerck and the entire team at Studio Artfex deserve a great deal of credit for making this happen.”

The results of Oelbrandt and the Artfex team’s efforts were nothing short of astonishing. They didn’t merely light the multi-colored begonias that made up the carpet; they used lighting and video to add depth and texture to the display, endowing it with a sense of movement that captivated the more than 120,000 people who turned out for the event.

Lighting was also used to colorize the surrounding buildings, including the famous Brussels Town Hall and the Museum of Brussels, which is housed in the Maison du Roi. Coordinating the colors of the buildings with those of the flower carpet, Oelbrandt gave the square a sense of intimacy, making it seem more personal and welcoming.

Each Biannual Flower Carpet event at the Grand Place is centered around a theme involving a different country. The 2018 theme involved Mexico, which presented Oelbrandt with an opportunity to use a vibrant mix of colors with plenty of reds, oranges and yellows in his design.

The 12 Rogue R3 Wash fixtures Oelbrandt used played a key role in helping him create his immersive array of colors. Positioned on two 9 meter portal frame trusses outside the third floor of the Museum of Brussels, the RGBW LED moving fixtures were used to project light 40 meters to the carpet. Drawing on the fixture’s wide 12°– 49° zoom range, he was able to vary coverage area, which helped him achieve the sense of movement on the carpet that he was after.

An equal number of spotlight fixtures joined the Rogue units in lighting the floral display. Other beams and projectors were used to project light and video on the carpet and buildings. LED strip fixtures, which were controlled via DMX by means of a 3D visualizer, provided added colors to the historic buildings, coordinating them with the illuminated carpet.

“We didn’t just go for a basic lighting during the nighttime to let people enjoy the view,” said Oelbrandt. “We also gave the carpet an extra dimension during the periodic timecode shows, making the colors stand out well. Also, by involving the buildings in the show, we gave people a 360° experience that pulled them into the Mexican ambiance that the square radiated.”

Its colorful and delicate beauty notwithstanding, the floral display depended on some hardcore technology. The largest part of the technical production for the lighting design was located on the third floor of the Brussels Museum, while the direction was set up in the city hall across the square. The communication lines from the nodes and the media servers ran through multiple SF-UTP lines that went along the opposite side of the buildings though a tunnel. All LED strips had their own Art-Net network through fiber controlled by the central direction in the city hall.

“Technology allowed us to work more in depth,” said Oelbrandt. “The illusions we created with the video mapping using shadows and movements made the whole event even more special. As a designer, I enjoy it when people wonder how things happened. At this event people saw the synergy between light, sound and motion. Wonderful how everything comes together and people enjoy every bit of it.” 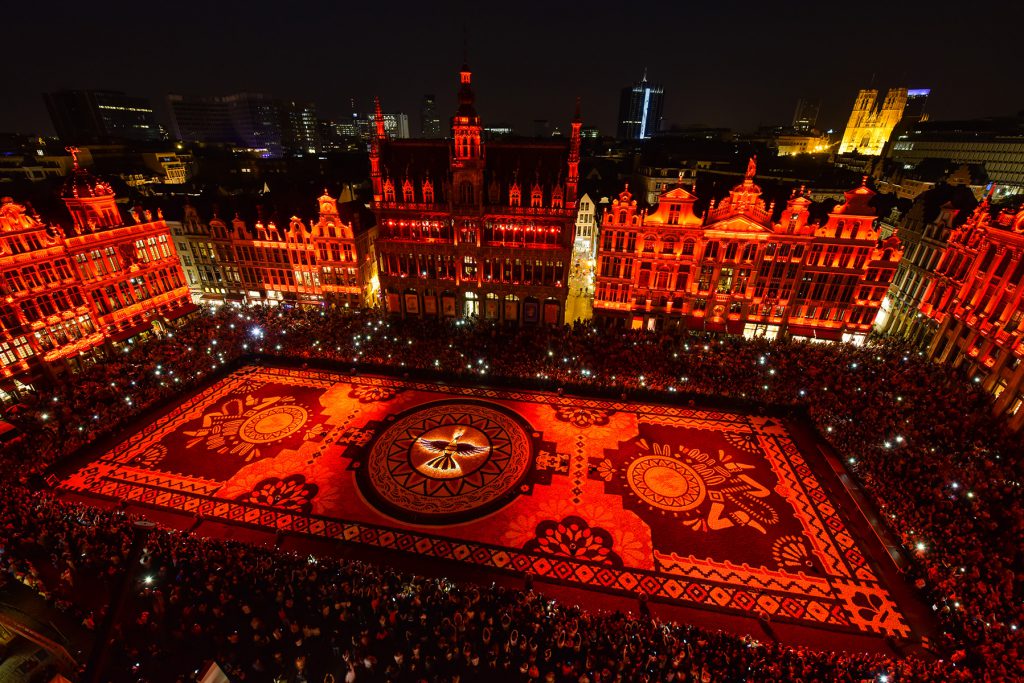