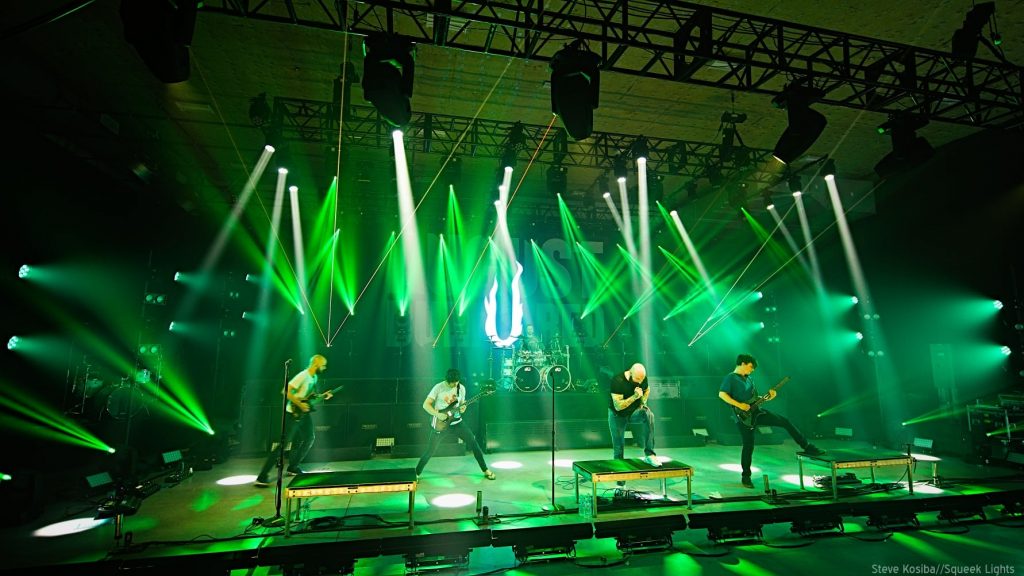 MIDDLESEX, NJ – Victor Zeiser has developed a natural feel for David Summers’ lighting style. It’s easy to see why too. For years, Summers has done a masterful job touring with rigs designed by Zeiser’s Squeek Lights.

So, when Zeiser and his partner Steve Kosiba created a rig for Summers to use on a recent pay-for-view livestream by metal giants August Burns Red, they knew exactly what to do to bring out the best in his work.

“Victor and Steve deserve a lot of credit,” said Summers. “The rigs they put together elevate your lighting. In my case, they know I love symmetry, so it’s there in the rig. Everything is done to facilitate the creation of big patterns, which is something I love to do.” 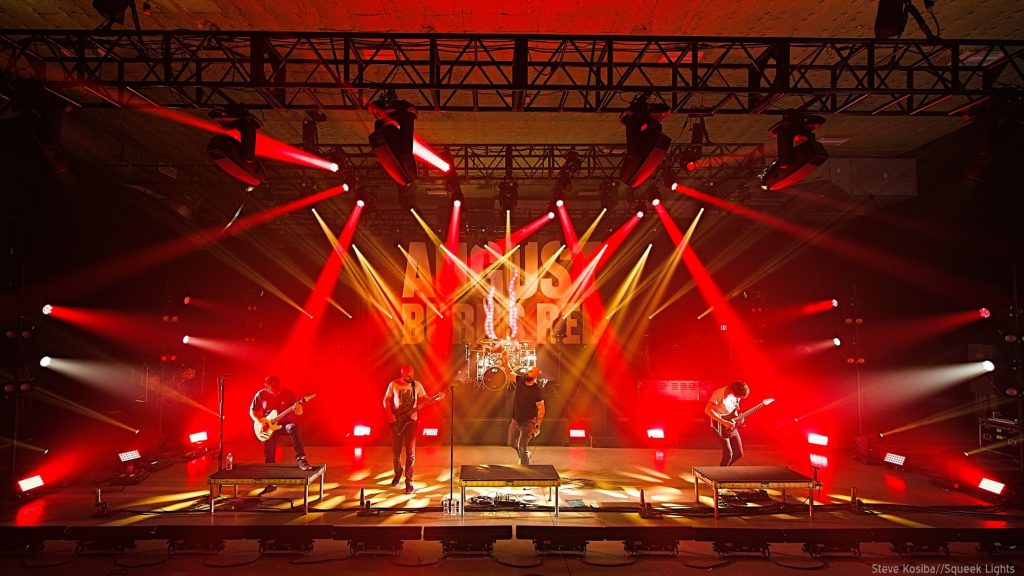 Bigness and boldness were everywhere to be seen in the Saturday night livestream, which was done to mark the 10th anniversary of the band’s seminal album “Leveler.” Shot at Aurora Film’s studio in Rock Lititz, the livestream featured August Burn Red’s largest-ever lighting package, a rig that was anchored by 37 Rogue R1 BeamWashes and 27 Rogue RH1 Hybrids from CHAUVET Professional.

Summers deployed this collection to create an uninterrupted torrent of unique looks during the livestream, which covered all the songs in Leveler, plus bonus tracks. He set different tones on stage by breaking out a bold rainbow of richly saturated reds, blues, purples, greens and other colors.

“On most shows I program I have to be super sparing with saturated color because I usually don’t have as many lights to work with,” said Summers. “In this case, though, having so many fixtures made it fun to work those deeper tones.”

Much of this color was produced by the Rouge RH1 Hybrid, described by Summers as “the meat and potatoes of this show.” He placed six of the 330W beam-spot fixture on the deck, had eight spread across the upstage on pipe and base, flew five on midstage truss, and hung eight on upstage truss.

“The placement of the hybrids gave me a lot of different ways to cover the band throughout the show,” said Summers. “August Burns Red loves beams so we used generous amounts of them during intense moments.” 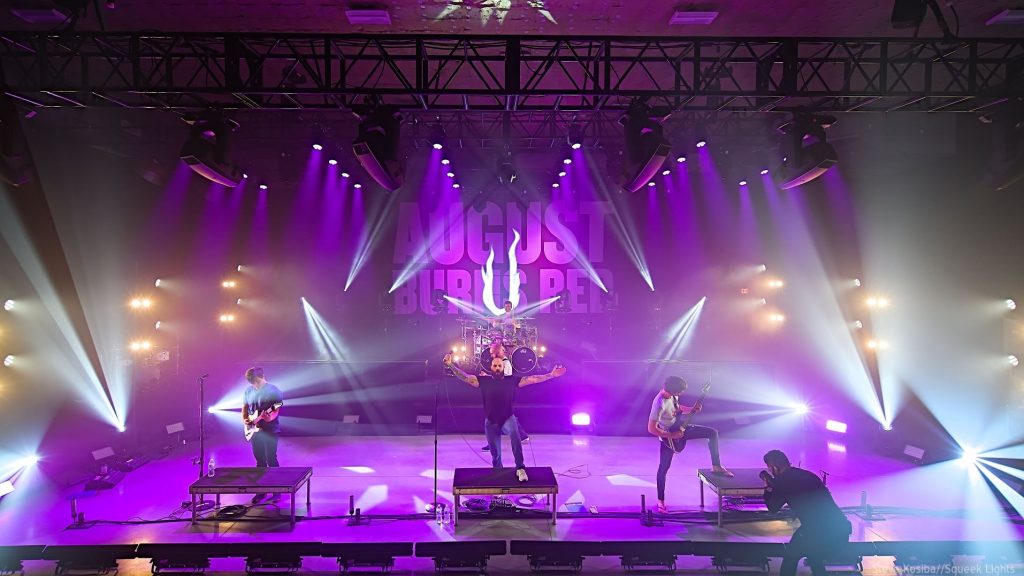 Some of those beams were used to create captivating geometric patterns on stage. Summers often framed individual band members with diagonal beams emanating from different directions, endowing the stage with camera friendly dimensionality.

Evoking images of August Burns Red’s roots, Sommers had 24 of his Rogue R1 BeamWash fixtures arranged four apiece on six bars over midstage to create a classic ACL look. “I liked the mood this created,” he said. “Plus, throwing the 24 BeamWashes over the stage in this configuration helped me make the symmetrical looks that I love so much.”

Summers also varied looks by downlighting three or four band members while leaving the other one or two in shadows. Alternating bright and dark places gave the show a motion driven dynamic quality.

Complementing the lighting was a band of CO2 fire screens behind the band, as well as a collection of lasers. “This rig had a lot of fire power,” said Summers. “I had to add design elements delicately whenever I wanted to highlight another part of the rig during the show to keep things balanced.”

Deftly maintaining this balance, Summers created a show that flowed smoothly, even while serving up big intense looks… just as Victor Zeiser and Steve Kosiba knew he would. 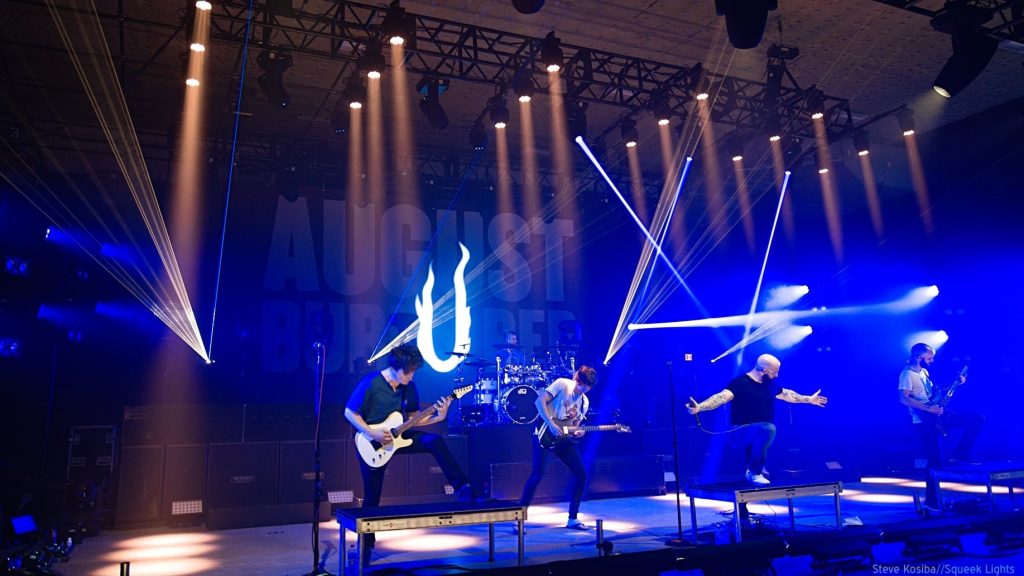