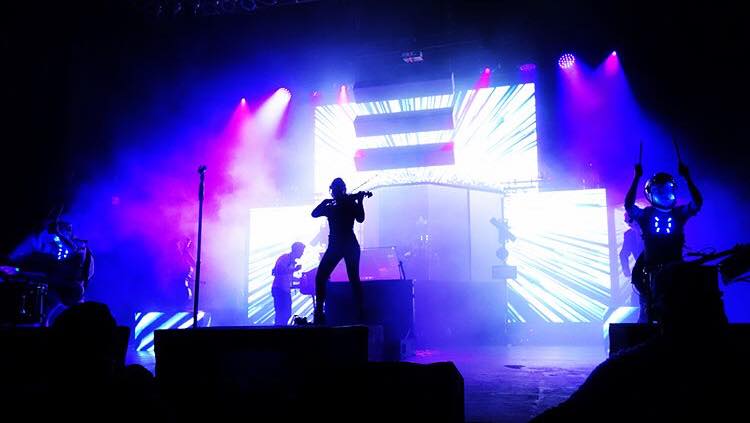 COLUMBUS, OH – Dustin Bates, frontman for the wildly popular Sci-Fi rockers Starset, tells a story about the quartet’s formation in 2013. The band, it seems, was created by the Starset Society, an organization dedicated to alerting the public about “The Message,” a cyrptic signal they picked up from the outer reaches of space.

A fictional tale? Perhaps, but one that certainly felt real to the fans who packed houses on the band’s recently completed European tour. Contributing to the galactic mood of the band’s shows was a time and space bending lighting design by Rodger Pugh of Dveus Designs that featured CHAUVET Professional fixtures and atmospherics, supplied by Elite Multimedia.

“Starset is a great group to design for, since their Sci-Fi orientation lends itself to powerful visuals,” said Pugh. (The band’s content has over one billion views on YouTube.) “The overall idea behind our design on this tour is ‘Sci-Fi.’ We want everyone in the audience to feel like they’re in a dark Blade Runner-type of future world. Everything is somewhat distorted; you become immersed, and you have an experience.”

Pugh’s evocative lightshow, with its intense crossing patterns of beams, bold mix of colors and somewhat eerie side lighting of performers, contributed to the creation of this other-worldly experience, as did the Sci-Fi costumes sometimes worn by band members.

Also playing a key role in creating the cosmic atmosphere are the large cubic panels on the upstage deck that are uplighted with COLORado Batten 72 fixtures. Taking advantage of the color-mixing capabilities of these RGBWA fixtures, Pugh bathed the cubic panels in a variety of richly saturated hues. By changing the colors displayed on these large scenic elements, he was able to alter the mood on stage.

When the cubes weren’t being colorized by the COLORado Batten fixtures, they were used to display space travel-tinged projection images. The switch from color to projection video rearranged the sense of space on stage, contributing to the Sci-Fi theme of the show.

Tying the transformative looks on stage together was the fog (often dispensed in copious amounts) by the Vesuvio II RGBA+UV atmospherics in Pugh’s rig. “We had a machine on each side of the deck, plus one under the drum riser,” he said. “Proper atmosphere creates an intimacy that dry air just doesn’t reach You can’t project the dark, dirty and industrial looks we wanted as part of our image on clean air. We had the Vesuvios, as well as Amhaze and cryo, to create the level of immersion we wanted.”

Although Starset’s global tour took them to faraway places (alas, though not in space), it started out at home in the band’s town of Columbus, Ohio. Giving that performance an extra dosage of lighting excitement were four Maverick MK3 Wash fixtures, supplied by Above Sound Lighting. Positioned across the upstage truss, the RGBW movers were used as part of the main key lighting for the show.

Given that Columbus is where Starset is from, the band wanted to put something extra into this show, according to Pugh. So, even as the Sci-Fi rockers evoke powerful image of the cosmos, it’s nice to know that their roots remain firmly planted in their hometown. 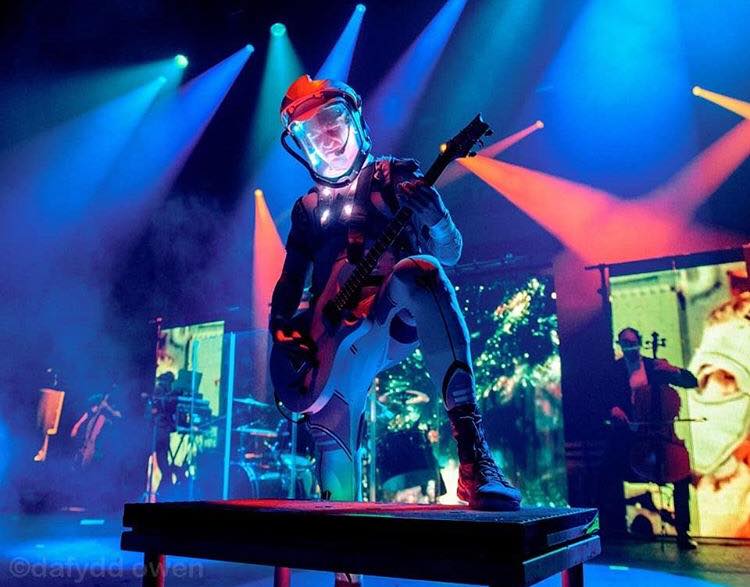