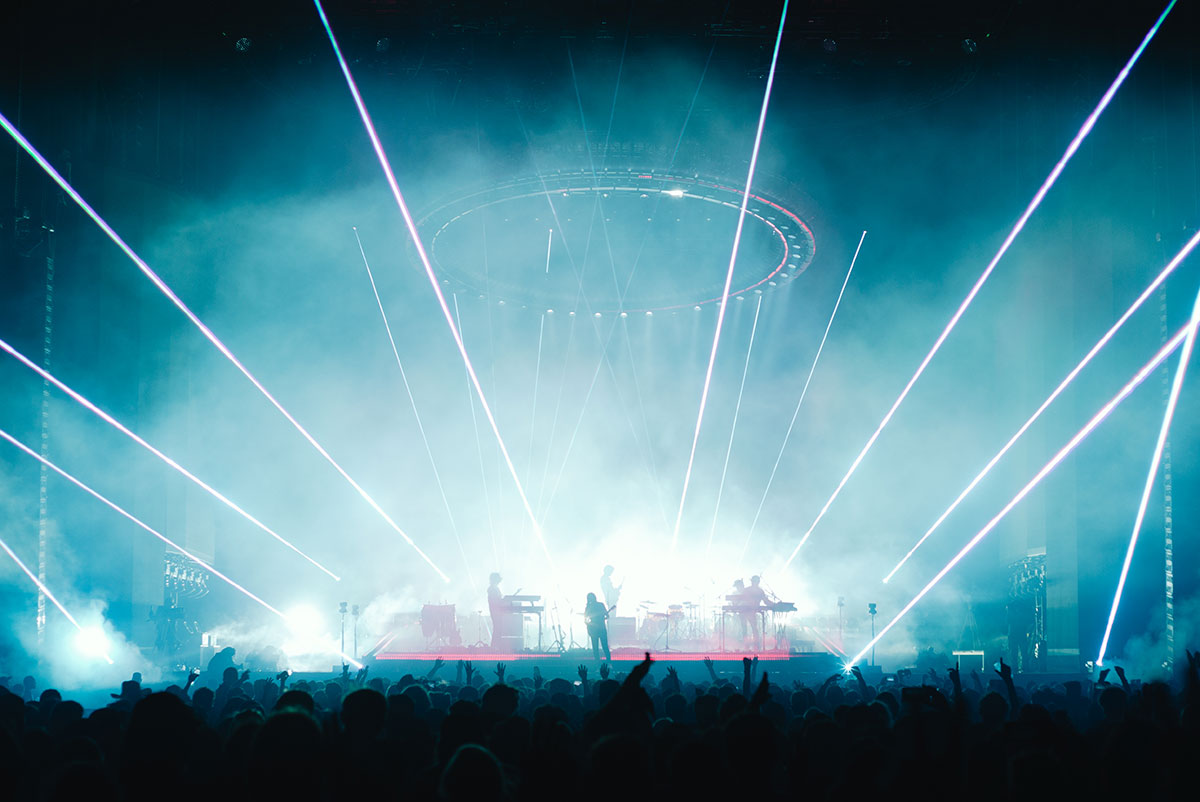 “Art is never finished,” wrote Leonardo da Vinci. The great Renaissance artist would no doubt have appreciated the approach that this London based designer has taken to lighting shows by a stellar collection of clients that includes Florence and the Machine, Kylie Minogue, Bastille, Queen + Adam Lambert, Tame Impala, David Byrne and Goldfrapp.

Meticulous in their detail, intricate in their conceptualization, his designs are products of intensive planning. Yet, when focused on from a different angle, there is often something their creator can discover that has been left undone — perhaps a new and an unexpected insight to be seized and acted upon to bring his vision ever so slightly closer to fruition. This is why, he tells us, that one of his favorite things about touring is that “it’s never a complete work.” 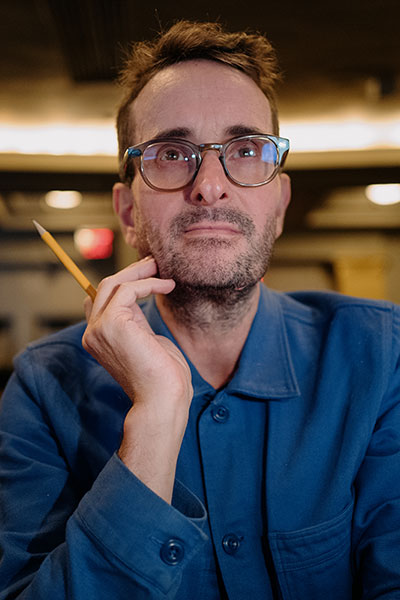 It is easy to understand why Sinclair would view his work through this prism. Creativity begets creativity as surely as inspiration inspires inspiration. With their unique lighting positions, nuanced use of silhouettes and shadows, and uncanny ability to wrap themselves around the physical presence of the artist on stage, his designs naturally lend themselves to new explorations.

Speaking to us from his London studio, the 2009 and 2018 Knight of Illumination Award winner shared his insights into the never-ending and expansive process of lighting design.

Your designs seem to focus less on pan and tilt moving fixtures and more on creating compelling scenes on stage. Do you feel concert lighting is becoming more theatrical?

“I think it’s accurate to say that I try not to rely on movement too much, and increasingly, I like to concentrate light on stage rather than in the audience. I’m not sure if concert lighting in general is becoming more theatrical, but my work maybe is. Whichever it is, I’m very happy about it.”

Silhouettes have played a prominent role in many of your designs for a range of artists like Bastille on the Doom Days tour. Can you share some of your thoughts on silhouetting? What does it add to a show?

“There’s something really exciting about a silhouette or a shadow. It’s a way of selectively showing someone, of amplifying motion, and of making a two-dimensional image from a three-dimensional object. It’s also an age-old theatrical technique from before the invention of electricity. Sometimes the timeless tricks are the best, aren’t they?”

Given what you just said about silhouetting turning three dimensional figures into two dimensional ones, do you view lighting’s role as altering reality on stage, or accentuating it, and making it clearer?

“Good question — I think lighting has many roles really, showing what we want to see, hiding what we don’t, exaggerating three dimensions, or flattening three dimensions to two. The trick, which I get wrong more often than right, is to know how to do things and deploy the technique at exactly the right time. Timing really is everything.” 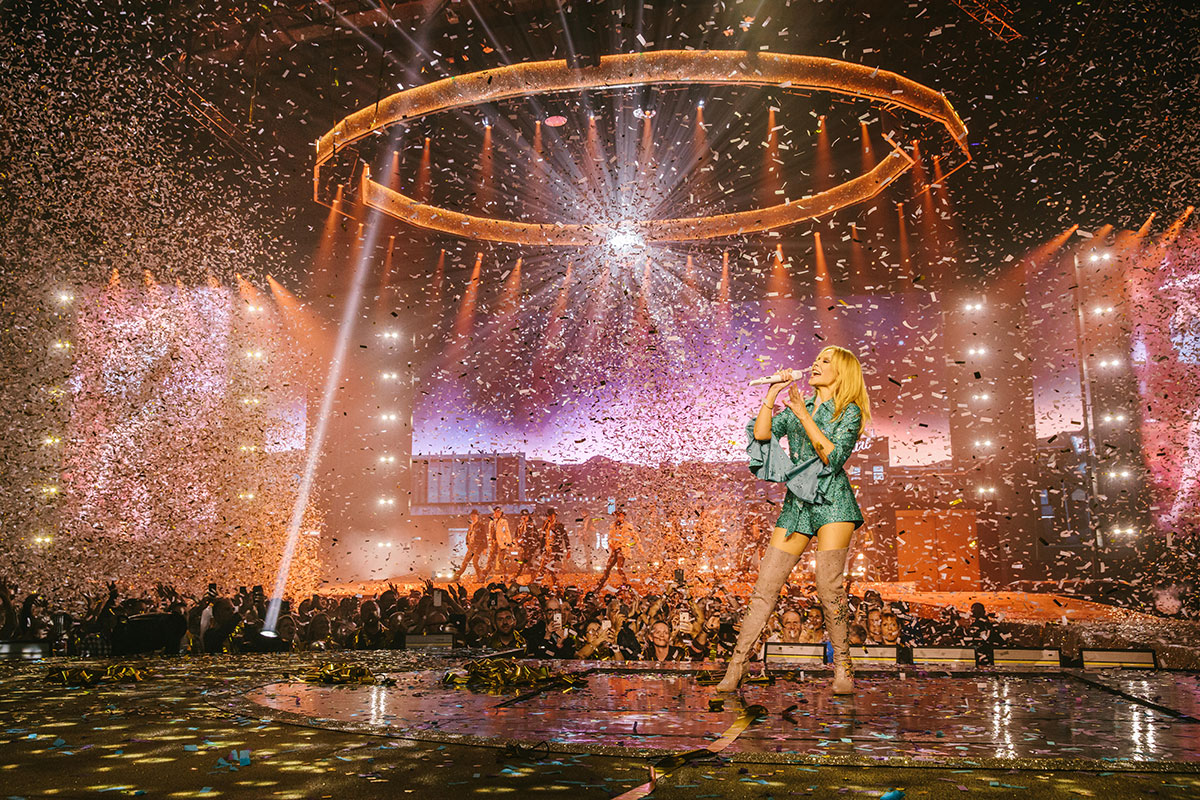 You collaborated closely with Kylie Minogue on the concept for the set for her recent Golden Tour. You also work closely with longtime clients like Peter Gabriel. It seems like performers in general are more attuned to visuals today. How does that impact you as a designer?

“Everything becomes so much easier if the artist is engaged in their show. We’re trying to make an environment for them to play their music in, and it helps so much if they want to work on that with us. Having a performer as part of the creative team brings such different energy. They often can’t understand why something is such a big practical problem, which in turn makes that problem go away.”

Speaking of clients, do you have to like one’s music to do a good job lighting it?

“I always end up loving the music, even if I know nothing at the start. I invest so much time and effort in the artist’s success, and I really have to believe in what I’m doing.”

As a designer, how do you know when you have a good fit with a client?

“You kind of work it out as the process starts. Like any other human interaction, sometimes it feels great and at other times it’s a little mushy.”

Your 2015 Florence and the Machine US tour was pretty unique. That show had almost all white light, no gobos and no visible movement of light sources. Yet you still managed to create a variety of different looks. How did you do that?

“It was the result of a lot of hard work and an extreme examination of detail, mainly from our wonderful programmer / lighting director Louisa Smurthwaite. Having such a limited palette to work from on that tour made us really concentrate on making cues with small increments. I think we ended up with 16 shades of white or something silly. Going from a quarter to a half CTB sometimes gave us the shift we needed.”

Your Florence and the Machine show also had very intense uplighting and backlighting, which virtually doubled as audience lighting. Generally speaking, what are your thoughts on using conventional audience lighting flown from downstage positions? Is that something you tend to minimize?

“I’m not a big fan of downstage blinders. They act as a barrier between stage and audience. They also seem like an easy cue. Slam them on an accent. There’s always a cleverer way.”

When you begin the design process what are the first elements you focus on?

“Budget, logistics and dull things. It’s always worth knowing the constraints, so that you can push them.

Do you ever dream about lighting designs?

You often seem to place intense light sources on or close to the deck. Why is that?

“Over time I think you develop things that work. Some go to moves, you can call them. The big line of backlight on the floor is one of mine. It changes a bit, but it’s often there in my designs.” 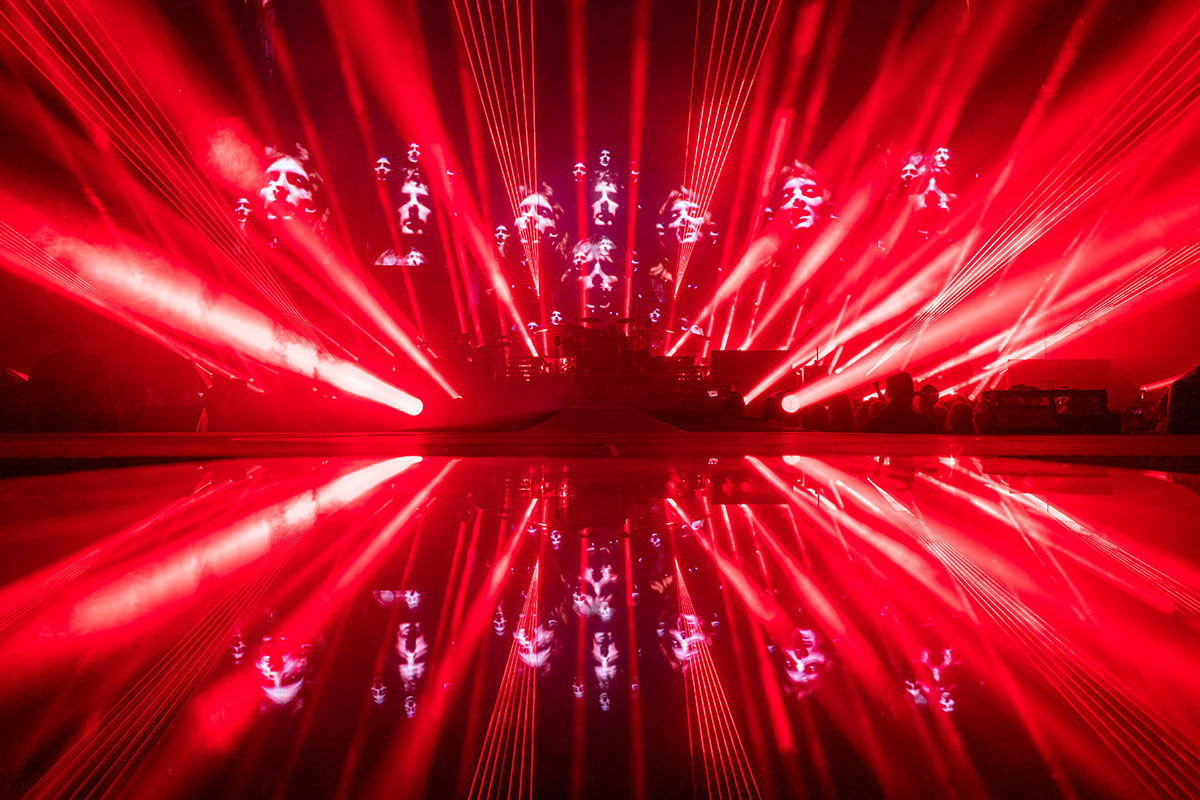 You’ve created some impressive looks with lasers, such as when you used them almost as backlighting for the Pet Shop Boys some years ago. But they seem to be less prevalent in your more recent work. Is there such a thing as laser fatigue?

“I still love lasers and we’ve done some great things with them this year, notably with Queen + Adam Lambert and the absolute assault that was Tame Impala’s Coachella show. However, lasers can easily outstay their welcome, so it’s important to structure their arrival and departure carefully so they are not the arc of the show.”

Do you ever change a design once a tour starts?
“Always. One of the things I love about touring is that it’s never a complete work. I always get slightly freaked out by film shoots where the record is locked and no detail can be changed.”

Is there one project in your career that stands out (good or bad) as the biggest learning experience?

“I think my 18 months as operator on Lord of the Dance in the ’90s. I was forced to pull my socks up a lot. It wasn’t fun at the time, but I’m grateful for the experience now.”

As we discussed earlier, you do a lot of silhouetting. You also do a lot of backlighting and spot lighting of artists. So, does the shape or size of a client’s body ever influence the decisions you make regarding design?

“Always. Our job is to make our clients look like heroes. If we don’t make them look good then we’re not doing the job right.”

How do you get inspired? Do you ever procrastinate at the start of a project?

“Inspiration is the strangest thing. I kind of don’t know where it comes from really. As for procrastination, it’s a big problem. I’m always slightly paranoid that I procrastinate far worse than anyone else.

Early in your career, you lit the Hollies, a legendary band. Are there any artists from the past that you wish you could travel back in time and light?

“I’d love to see how things developed as the electric light was invented. Victorian theatre seems like a real time of excitement and fast change.”

How would you like to be remembered as a lighting designer?

“I’d like to be remembered for doing good work and not resting on my laurels.”