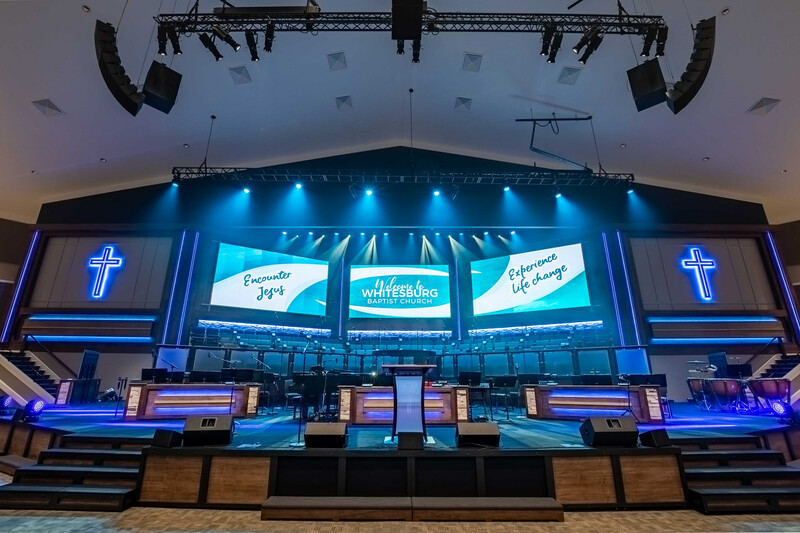 HUNTSVILLE, AL – Whitesburg Baptist was at a crossroads last year. Leaders at the 7,000-member church knew that they had to modernize their worship space to create a more engaging environment, one that would support their three different Sunday services while also being more camera friendly for livestreams and broadcasts.

The question they faced was how? Ideas ranged from constructing an entirely new building, to undertaking smaller piecemeal changes. None felt quite right until they met with the team from Paragon 360 who showed them how they could completely transform their existing space without making the investment of time and money in a new facility.

This summer, Whitesburg Baptist unveiled the result of its collaboration with Paragon 360: a contemporary and beautifully balanced worship center that makes all feel welcomed, whether they’re watching online or participating in a social distant live service.

Paragon 360 followed a carefully planned multi-step approach to achieve this transformation. The company’s team redesigned the stage area for functionality and aesthetics using its custom staging, scenic and architectural elements.

To improve the listening experience, acoustics throughout the room were enhanced and new audio gear was integrated into the church’s existing system. Video walls were added, and lighting was made more immersive, as well as more camera friendly, through the addition of 43 Ovation E-260WW LED ellipsoidal fixtures.

“The Ovation fixtures have a great color temperature that not only looks good on video but also in person,” said Richard Heaton of Paragon 360. ‘The natural-looking color allows the observer to feel welcome in the room, as much as welcome in the moment, which is very important in making the transition between ‘observing the moment’” and ‘being in the moment.’

“This church’s services are broadcast, and streaming is an important part of its ministry goals,” continued Heaton. “We believe the Ovation products look great on camera, but we choose them mostly because of the reliability more than anything else.

In addition to these ellipsoidals, the church’s lighting rig features 24 Rogue R2X Washes. Positioned on STG-1 Truss and STG-2 Truss, 18 of the RGBW moving LED fixtures are relied up to provide colorful backlighting for the entire stage, including the pulpit, orchestra section and choir area.

The remaining six R2X Wash units are on the downstage edge of the stage. “These fixtures are used in a variety of ways,” said Heaton. “They can be tightened and thrown over the audience as beams during contemporary moments, but most often they’re used here as “simple” eye candy, not ‘winky blinky.’ They’re also used for light texturing on the orchestra, praise band, and praise singers. They create more dramatic and interesting angles.”

Engaging looks from the new lighting system, along with all the other changes Paragon 360 made as part of the sweeping remodeling project, have given Whitesburg Baptist’s leaders the transformational change they were looking for, while allowing them to remain in the church they’ve called home for decades.