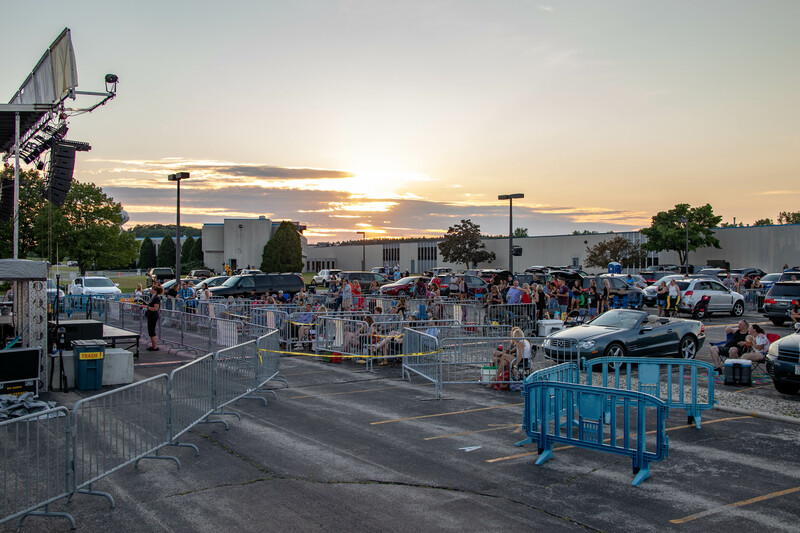 GRAFTON, WI – Milwaukee Symphony Cellist Peter Thomas has played at major symphony halls. As frontman for the chart-topping Grammy nominated Plain White Ts, Tom Higgenson has filled arenas from LA to New York. This June, they joined other artists from different genres performing in a markedly different venue as part of Live At The Lot.

Taking place 23 miles outside Milwaukee in the parking lot of Kapco Metal Stamping, the 14-date series of shows offered the people of southeast Wisconsin a welcomed opportunity to get out of the house and enjoy a safe, socially distant evening outdoors by combining concerts and drive-in movies.

Like so many innovations that have sprung up during this pandemic to provide people with hope, comfort, or just a plain old-fashioned break from their challenging routines, Live At The Lot was the result of resourceful individuals pulling together different bits and pieces from their own lives to come up with an unexpected solution.

Jim Kacmarcik, the president of Kapco Metal Stamping had much more than a parking lot to lend to the effort. Among his business interests are KNE Staging, Given Music Publishing Company and Stars For Charities, an entertainment booking agency. Combining his experience and connections from all three, along with the temporary evening use of the parking lot, he was able to turn the idea for Live At The Lot into reality, under the newly created “K-Nation Entertainment” banner for three weeks in June.

Shows took place on a Stageline SL100, 20’x24’ stage supplied by KNW Staging. Dynamic lightshows were designed by Aaron Zimmermann and L2 Paul Berger of Proline Entertainment, which also supplied the rig’s 24 CHAUVET Professional fixtures. Movies, which consisted of family fare films like Frozen 2 and Lion King, were shown on a 24’ screen.

Sean Becker, Director of Safety and Production Services KNE Staging, describes how a typical evening unfolded during Live At The Lot’s early summer run. “On most nights we had a band from 5:30 -7:30,” he said. “Then, we’d hang the screen from the SL100 roof and show a movie. While waiting for it to be dark enough to see the projection we had an acoustic soloist perform both original material as well as music from the movie playing each night. So, it created a complete entertainment experience.”

The first and last shows in the Live At The Lot series were free of charge thank-you celebrations for first responders and health care heroes. The 12 shows in-between had an admission charge that varied from $25 to $100 depending on where a car was parked. There were six spots in front of the stage, 12 premium spots and over 40 other spots in the lot. Patrons could set up lawn chairs in the immediate vicinity of their vehicles, provided they maintained social distancing.

Cosponsored by local news radio station, 620 WTMJ, Live At The Lot was hugely popular, thanks to inspired performances by the artists on stage and the overall high-quality production value of the shows. Zimmermann and Berger were able to create genuine concert stage show looks with their compact rig.

A group of 12 COLORado 1 Solo par style units were positioned along the downstage deck to provide a richly textured colored background that reflected a range of moods on stage, while two addition fixtures were used to highlight banners. For special effects and crowd lighting, there were four STRIKE 4 units and four Legend 230SR Beam fixtures hung from the SL100 roof. After the show, two of the STRIKE units served double duty by illuminating the egress lane.

“Proline did an impressive job lighting the shows,” said Becker. “Much of the live music segment took place at dusk, which limited how you could use moving fixtures, but they created a lot of intense moods with background colors and blinders. Everyone was extremely happy with how every aspect of the shows turned out.”

As for the future, Becker says at least two more Live At The Lot dates have been scheduled for July with the possibility of more coming. Born of necessity, this improvised entertainment venue will continue to celebrate the imaginative power of the human spirit, both in terms of the entertainment it showcases, and the resourceful effort that led to its creation.