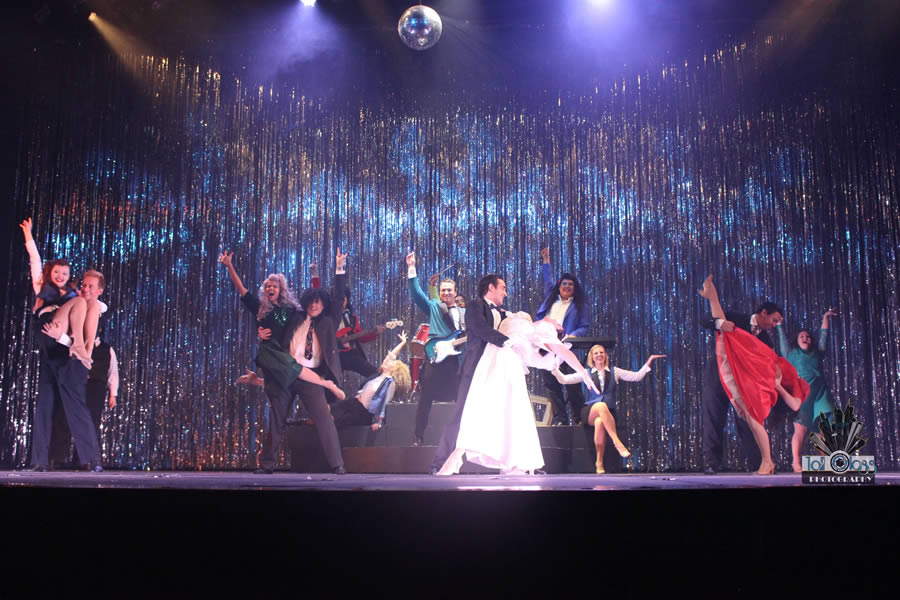 BOCA RATON, FL – “The most effective moments in theatre are those that appeal to basic and commonplace emotions,” wrote Clayton Hamilton in his seminal “Theory of Theatre.” Although the legendary, critic, narrator and author died in 1946, six decades before the Wedding Singer debuted on Broadway, he likely would have been impressed by the simple, unbridled power of the Mathew Sklar-Chad Beguelin musical, based on the film of the same name.

From its very opening, which thrusts the audience into the middle of a spirited wedding party, the Tony-nominated musical serves up an unabashedly heartfelt flurry of emotions as it follows the story of wanna be rock star Robbie Hart as he loses and then finds love. It is a basic tale that resonates with virtually anyone — and in the retelling of it this summer at Boca Raton’s Olympic Heights Performing Arts Center, Clifford Spulock added to its impact with a vividly expressive lighting design that featured CHAUVET Professional fixtures. 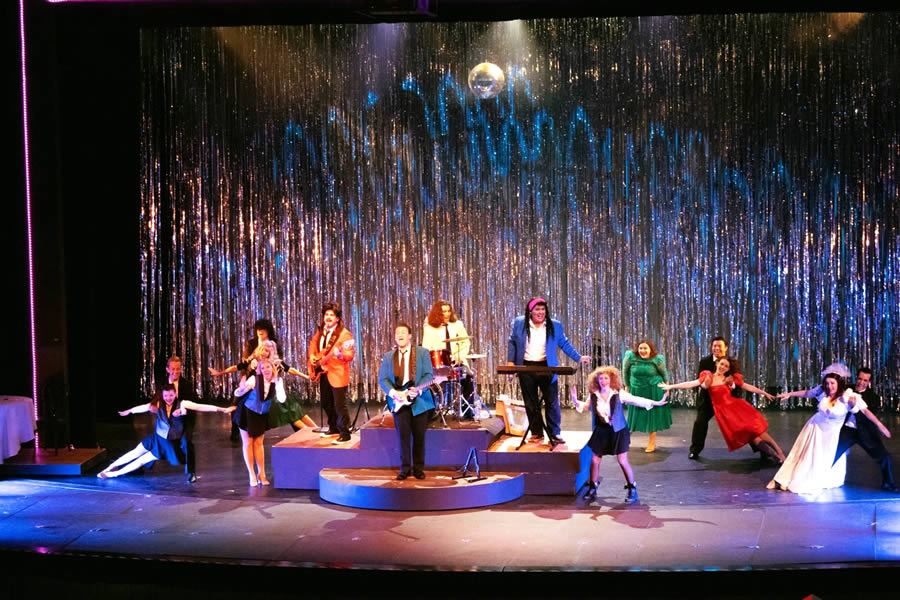 “There are a lot of different emotions that go on in this show,” said Spulock. “It starts out with a massive party at a wedding. I light this with huge bump changes and big hits that play off the music. Light from my fixtures cut through the haze into the audience at this point to create a very immersive, energetic opening that encourages the audience to get up and dance to the music.”

Of course, this ebullient mood crashes dramatically when Robbie is left at the alter by his fiancée. Spulock’s lighting reflects this depressive mood with deep, dark colors and unsettling shadows.

“The lighting really follows Robbie on his emotional journey,” said Spulock. “There is a song he sings at another wedding called “Casualty of Love” where he calls out “freaks” of the wedding who will never feel true love, and have felt heart break like him. The lighting is full of saturated green and reds while the “freaks” dance out to the metal song ala the Michael Jackson “Thriller” dance, so we have a lot of fun with the lights.” 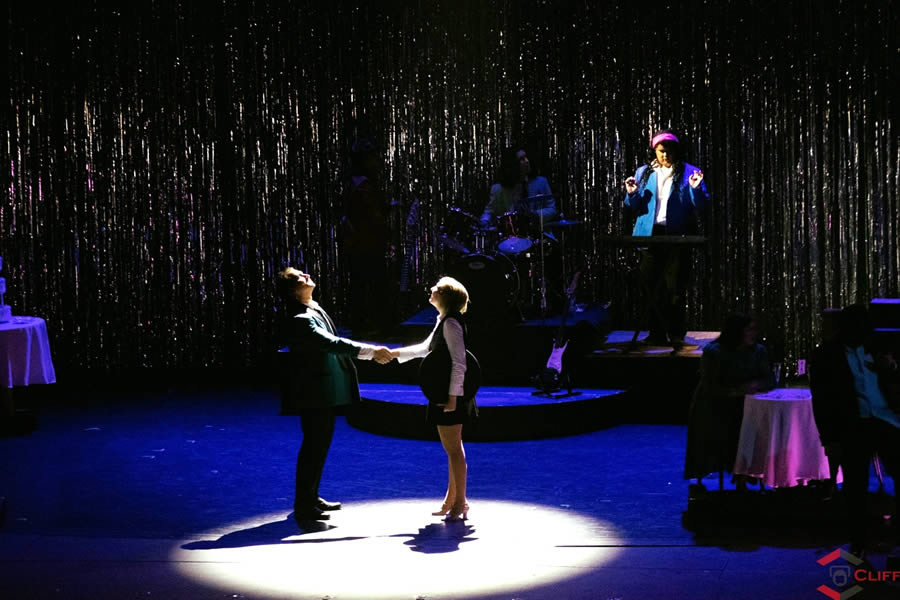 Among the lights that Spulock had fun with were two Rogue R1X Spot fixtures that were positioned on the apron electric. Filling a variety of roles in the lighting design, the 170W LED fixtures were used for front light specials as well as to illuminate the mylar drop during party scenes. Drawing on their dual gobo wheels and 16° beam angle, Spulock also relied on the Rogue units for gobo breakups on stage, as well as for aerial effects.

Also key to Spulock’s design were the 12 COLORado Batten 144 Tour fixtures. These RGBWA linear lights were used to wash the stage in a range of colors to reflect the emotional peaks and valleys of Robbie’s journey. Half of the batten units were positioned on the stage apron, three stage left and three stage right, while the remainder were placed one apiece on three scaffolding positions.

“We had great results with the COLORados shooting up on each actor during the “Saturday Night in the City” scene,” said Spulock. “The COLORados are a very versatile batten. There is a covered pit in this venue, so the lighting points were not designed for an apron of this size. We met this challenge very successfully and got the coverage we needed by using box booms – along with the help of the COLORados and my intern Michael Patella.” 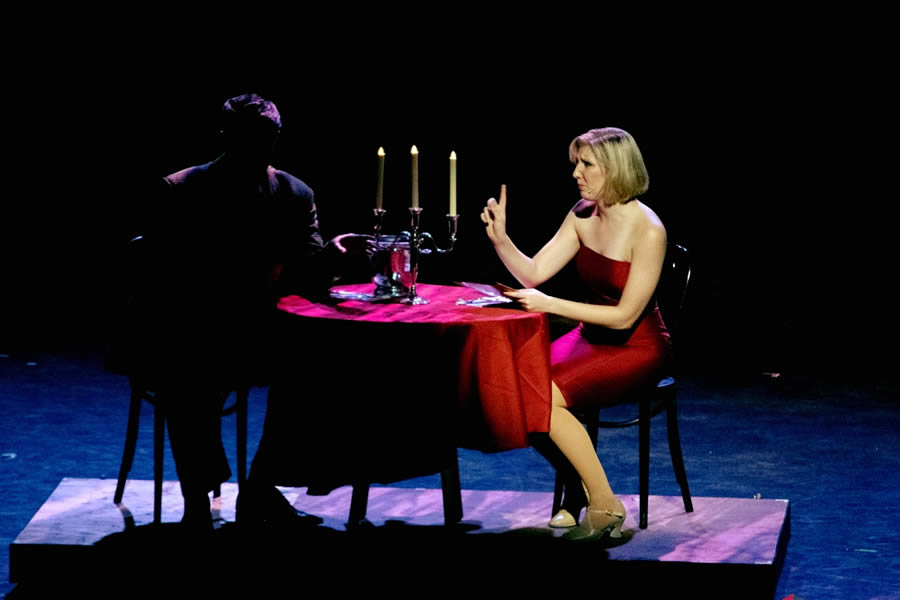 With its unabashed emotional flavor, The Wedding Singer was “a pure pleasure to light,” according to Spulock. The part that stands out especially for him was during the song “If I Told You.”

“At this point, Julia (the ultimate true love of Robbie) is about 20-feet in the air on a large platform, which serves as her ‘bedroom,'” said Spulock. “She is looking out a window, while Robbie is on the street below. I used a simple back and spot light on each actor while the star drop twinkled in the background, and haze filled the air. The lighting worked magically with the powerful voices of the actors and the arrangement of the music. There was power in the simplicity of the scene and it sent chills down your spine.”