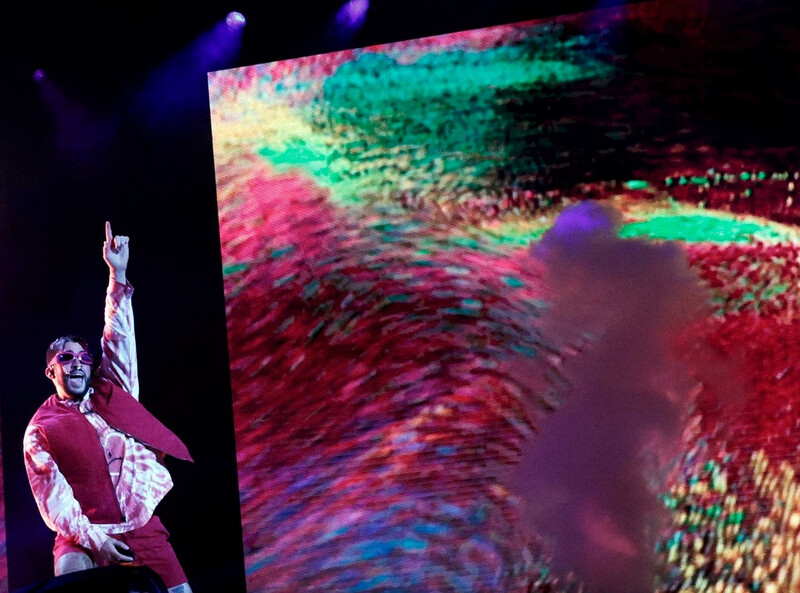 PHILADELPHIA – You better check your email right now! Patrick Dierson is no stranger to getting text messages like this when he’s on a job site, especially when he’s overseeing the production design at the Jay-Z curated Made in America festival. “I love this event, because it never fails to surprise with unexpected challenges,” he said, looking back on the 2022 edition of the festival. “That’s what makes it fun.”

Made In America more than lived up to Dierson’s expectations this year, as just a few days before load-in he got a message that one of the headliners at the urban and Latin music festival, Lil Uzi Vert, wanted two Lamborghinis on the stage for his performance.

“This required a little more than your average production coordination,” said Dierson. “Let’s face it.. this is Philly. The concept of handing two Lambos to a teamster in a forklift is enough to make an eyebrow raise. We didn’t want these things going back to the King of Prussia, PA exotic car dealership with two holes in the wing doors and covered in McRib sauce, so it became a full-court press of production management to make sure that the appropriate delivery vehicles were used, and the cars specifically staged for delivery in a way that made sense. Diversified Productions Services, which produced the event with Roc Nation, were masters at making this happen.”

Another surprise at the downtown festival, though not quite as unique, also made life interesting for the production team when the organizers changed plans for the Rocky Stage. “We got word rather late in the process that they wanted to keep the bones of last year’s design in place,” said Dierson. “Thankfully, 4Wall Entertainment (gear supplier for the event), was able to get us what we needed and helped to re-engineer the automation systems that were a part of that previous design, but not planned for this year. The result was clean, linear truss arrays with all the bells and whistles we needed to support great shows.” 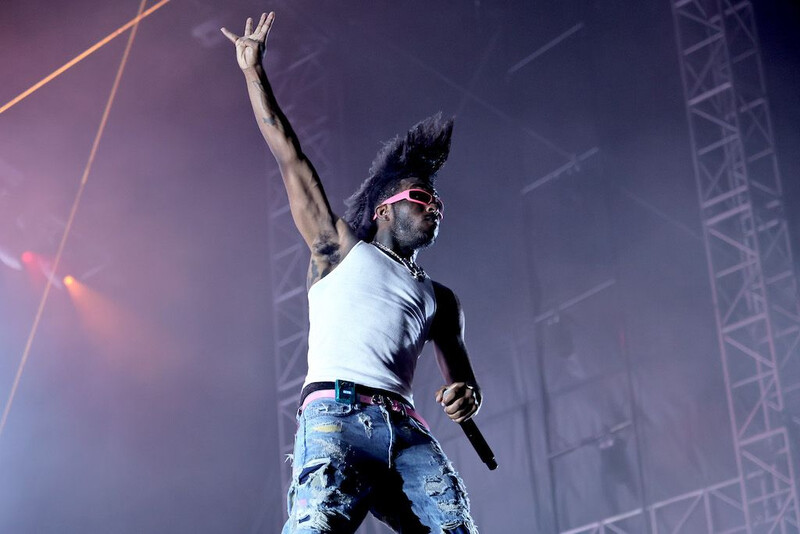 Speaking of the Color STRIKE M fixtures, Dierson noted: “They are becoming one of our favorites, particularly for outdoor festival designs. Having that type of effect unit that is so wildly bright, has a broad beam, can do a lot of tricks, and can be placed out in the elements with its IP65 rating, is a phenomenal asset. We were able to use them not just for typical stage effect work, but also for full stage and audience washes. They’re just a workhorse of a solution.”

The Color STRIKE M and COLORado PXL Bar 16 were also featured on the festival’s Liberty Stage. Dierson and his team at The Activity spec’d 20 STRIKE units and 40 of the bars for that stage, as well as 20 Maverick MK3 Wash and 18 Rogue R1 Beam fixtures. They endowed each stage with its own distinct personality, while still preserving a consistent Made in America vibe on both.

“We always try to make the two stages as different as possible, while still designing all the necessary elements that our guest LDs & VJs expect,” said Dierson. “The physical stage structures are very different in both size and weight load capacities, so all of that inevitably needs to be considered. We had gone for a linear feel on the Rocky stage so once we started to look at the Liberty stage we decided to do multiple truss arches that could be both easily achieved, as well as load in quickly. The use of pre-rigged truss with multiple pick points ultimately helped us realize those goals.”

Many of the light shows on both stages featured some deeply textured layered looks, a result of the rig design. Explaining that he “dislikes very flat looks,” Dierson tends to push for as much variation as possible on the trim heights to encourage more three dimensional designs. This configuration also gives the cameras much more flexibility and results in more interesting backgrounds from different angles. 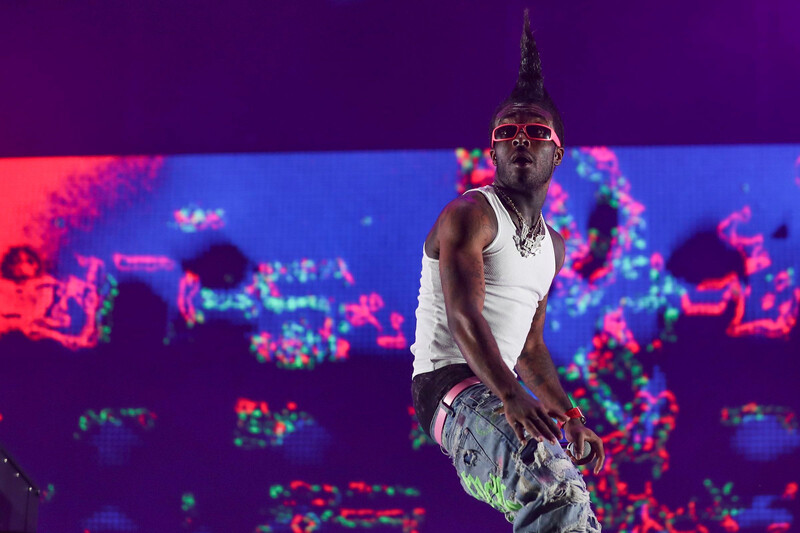 The Made in America festival featured a star-studded lineup headlined by the likes of Bad Bunny, Tyler The Creator, Don Toliver, Burna Boy, JID and Shoh Allegra. Some of the artists brought their own LDs and VJs, but others relied on David “Fuji” Convertino on the Rocky Stage and Evan “Dazzle” Bloom on Liberty to run their shows.

“This year, even some headliners didn’t bring LDs,” said Dierson. “Many of the teams that were traveling in were coming in day of show from performances in other cities the night before. That required our team to do a lot of advance programming on our guest’s behalf to help them be prepared. Fuji and Dazzle did great work making things happen, as did the rest of our crew, including project manager-gaffer John Ellar, art director Tony Fusco, and previz creator David Perkins, as well as John Duncan, Josh Fleitell, James Marzak, Asad Yousof, Matt Weede, RJ Thomas, Steve “Scuba” Osnoszko, and James Marzak.”

Thanks in part to this team effort, there were many magical moments at Made in America, along with the usual surprises. One of the more enchanting in Dierson’s estimation was LD Jacob VanVlymen’s show for Jasmine.

“Some of the artist this year didn’t want to be lit directly,” said Dierson. “So sometimes, we ended up with sets that had lights blinking and flashing up in the air and an extremely dark stage underneath. Jacob was the complete opposite. He took advantage of our spots that John Ellar had perfectly balanced for camera. Jasmine looked gorgeous both on stage and on the live stream. Jacob truly knew how to light his subject in a way that made her comfortable on stage. When an artist says that they don’t want to be lit, there’s a big difference between just giving up with a blacked-out stage, and knowing your craft well enough to do your job while still making the artist comfortable.”

It was shows like Jasmine’s that also set Dierson’s phone on fire. Only, instead of saying “check your email,” these texts read “Great Work!” 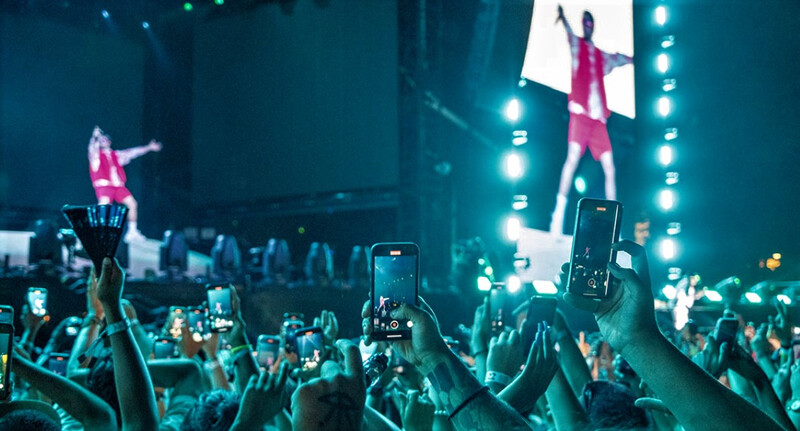