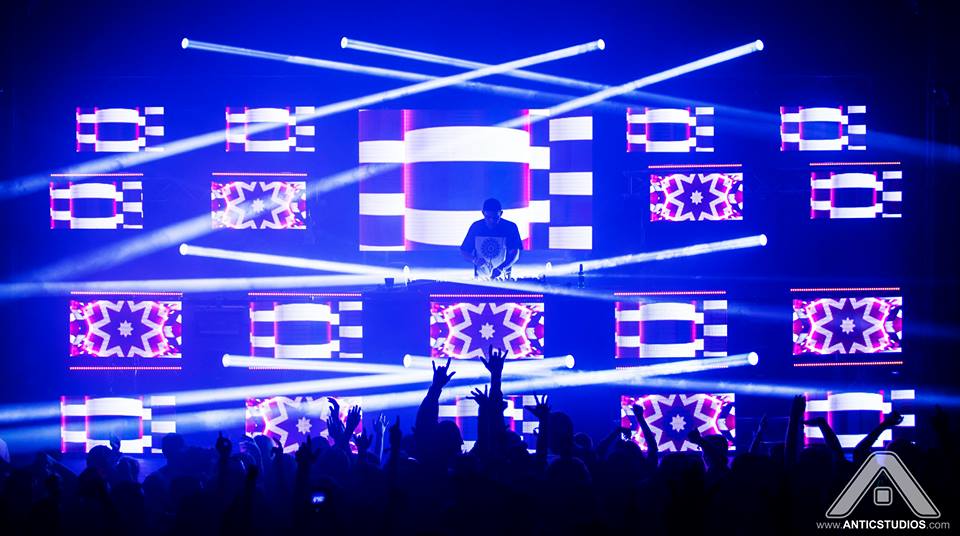 MINNEAPOLIS – A master of the filthy wub and wiry house vibe, Zomboy has had a powerful gravitational pull on the EDM sound. Stars like Skrillex, DJ Snake and almost every other bass DJ have, at one time or another, used one of his iconic hits as a set opener. His remix of the Chainsmokers’ “Don’t Let Me Down” has melted stages. Beyond his earth shifting hits, however, this British DJ has connected to fans with a charismatic stage presence.

At a recent Zomboy show in at Minneapolis’ Skyway Theater, Ryan Warffuel and Max Koehler of Antic Studios captured the energy of the EDM star’s music, while also providing immersive visual support for his stage presence by creating an encompassing rig made up of CHAUVET Professional fixtures and video panels.  Using a collection of 12 Rogue R1 Beam and 6 Rogue R2 Wash fixtures, along with 15 ÉPIX Strip Tour pixel-mapping one meter LED strips, and 51 PVP S5 LED video panels, the duo created a tightly woven panorama of moving light and video images that raced around the stage in sync with the star’s powerful, chaotic and altogether exhilarating sound.

“We wanted to involve the whole stage in the design and create a lot of movement, since we felt this was the best way to capture the music and stage presence of Zomboy,” said Warffuel. “Our goal was to create an immersive visual presentation that drew the audience into the performance on stage.”

As a means of accomplishing this goal, the Antic team arranged 18 video displays in rows and fed them a variety of looping backgrounds via a signal distributor on stage that was linked to a CHAUVET Professional VIP driver at FOH. “We mixed up the content on the panels so sometimes they all showed the same images and sometimes they alternated images,” said Koehler. “We used a visual pack that I made called ‘VJ Survival Pack Vol. 1.’  This pack has a variety of HD looping backgrounds, 3D skulls, and transparent overlays.  We created it in Adobe After Effects. The high resolution of the S5 panels let us get very detailed with our images, which were always coordinated to give the stage the look we wanted.”

The ÉPIX Strip Tour fixtures were positioned in the negative space between the LED video panels. Often the same images were displayed on the strips and the panels to create a more immersive atmosphere. “We used the strips to tie the panels together and avoid blank space,” said Warffuel. “It created a powerful wall of images running across the entire stage.”

Also creating a powerful impression were the rig’s Rogue moving fixtures. Mounted on three rows of truss that ran across the width of the stage, the Rogues were used to direct bright rays of light across the deck at different eye levels, and from opposite directions. The crossing light patterns gave the stage a greater sense of depth, as it pulled eyes in toward the center. The net result was to provide fans with a better opportunity to lose themselves in the performance. Somehow that outcome seemed just right for a Zomboy show.