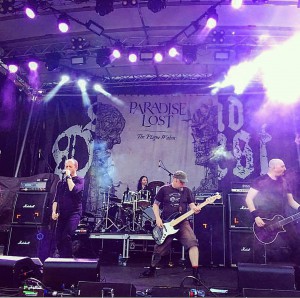 BALTIMORE, MD – Maryland is known for its beautiful beaches, splendid shellfish and rich nautical history. In recent years, however, another item has been added to this notable list, as the “Old Line State,” the place that gave birth to the US National Anthem, is becoming known as an epicenter of metal music.

Zack Bunner, lighting designer at Showtime Sound (Frederick, Maryland), selected the fixtures for the Deathfest rig with brightness and intensity in mind. “This is my first year designing for this festival, since I am new to Showtime, but I knew I was expected to create a very punchy rig,” he said. “Every fixture had to go all out to match the intensity on stage. In fact, we had originally specced a COB LED panel from another manufacturer, but we replaced it with the STRIKE 4s, because I wasn’t impressed with the quality of its light. I’m glad I switched to the STRIKEs; the dimmer curve is awesome and they are just as bright as their incandescent counterparts.” 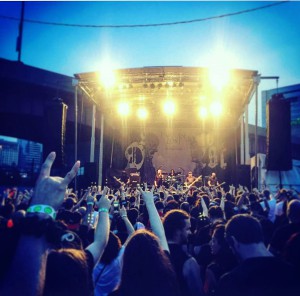 Arranged in a row of five units on downstage truss, the STRIKE 4s served a variety of functions in the MDF rig.  Bunner used the warm white LED fixtures for backwashing the stage, for strobing and for audience lighting. “The cool thing about the STRIKEs is that they let you do so many different things without adding more fixtures to your rig,” said the LD. “This is really important at a festival. You want to have a flexible rig for the various designers that come in and want to program high intensity shows. Plus you want to reflect the styles of different bands, even if they don’t bring their own LD along. Strobing plus fast color and dimmer effects are needed. So the fixtures I selected were specifically chosen for the tempo of this genre.”

Complementing the STRIKE 4 fixtures were the 12 Rogue R2 Washes in the MDF rig.  Bunner flew these fixtures in a V-shaped configuration with its apex pointing downstage. This arrangement allowed him to create engaging funneled looks, in addition to giving him greater coverage of the stage. 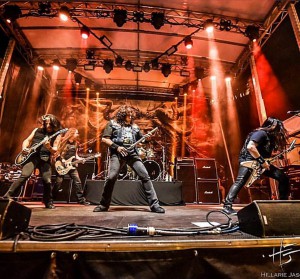 “The Rogues were pivotal to us being able to pull off what we did,” said Bunner, who gave props to Eric Miller, his ME, and Brett Angstadt, his LD/programmer, for helping him create a powerful show. “We used them for their macros, fast movement, and general stage washing in some looks. Also their strobing effects were awesome –there was a great deal of strobing in our show. We relied on the zooming and fast movements of the Rogues to get the looks we wanted.  They were crucial for a festival in this genre.”

In addition to the STRIKE 4 and Rogue fixtures, Bunner and his team relied on four Geyser RGB foggers from CHAUVET DJ to add an extra evocative element to the show. “The RGB light that the Geysers shoot through their fog is intensely bright which made them ideally suited for a festival like this. There was nothing timid about what we did.”