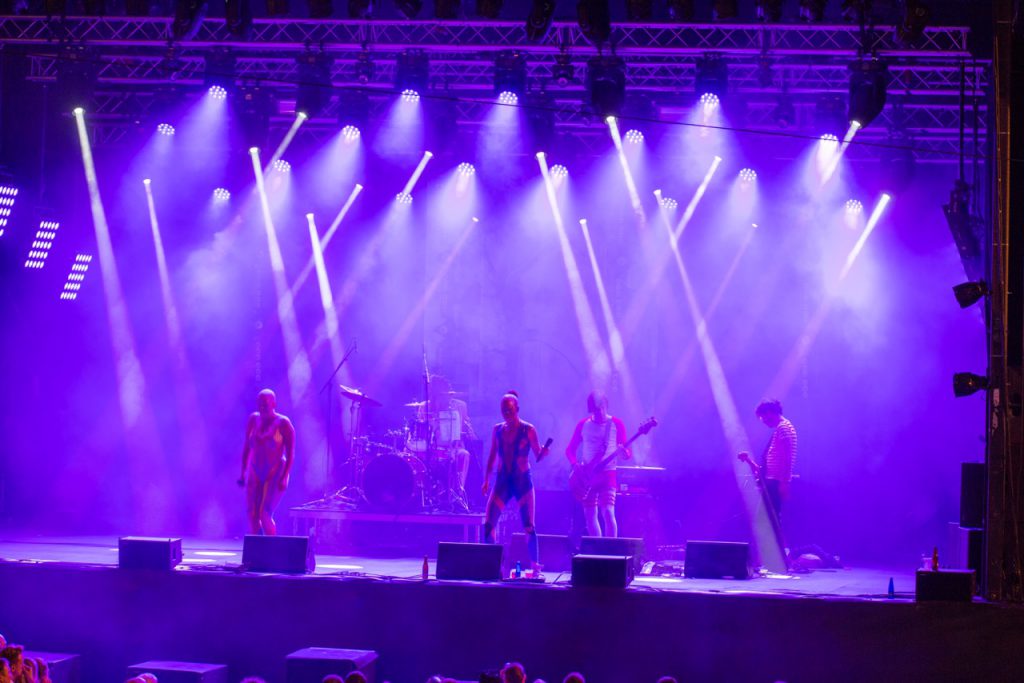 GHENT, BELGIUM – At the end of July every year, two million visitors ascend upon the medieval streets and market squares of Ghent, Belgium, for the annual 10-day Gentse Feesten, a music and arts festival with a 160-year pedigree. One of the central hubs at the festival is to be found at the Sint-Baafsplein square in the historic medieval part of Ghent, which houses one of the largest stages at the festival.

After testing out the Maverick series earlier in the year, de Schinckel was convinced that the Maverick MK2 Spot and Wash would provide an arsenal of tools with which to create huge looks on the central Sint-Baafsplein stage in complete juxtaposition to the surrounding medieval architecture. “As the Sint-Baafsplein stage is one of the key focal points of the entire festival, it was vital for me to award the stage with big looks and presence,” commented de Schinckel. “The Mavericks were instrumental for me to achieve this.”

Impressed by the output and versatility of the Maverick MK2 SpotMaverick Wash fixtures above the stage on truss. “When we tested the Wash, we were completely overwhelmed by the saturation of the colours,” commented de Schinckel. “The colour mixing and intensity is in a different class to other fixtures within this budget,” continued de Schinckel. “Combined with the Spot, the Wash painted the perfect backdrop on stage and created quite an impressive atmosphere for the festivalgoers.”

Drawing on the individually controllable pixels of the Maverick MK2 Wash, de Schinckel was able to mix various colours and cast a rainbow-like array of hues onto the artists. “The multi pixel control really adds to the whole versatility of the Maverick Wash series,” continued de Schinckel. “The speed of the colour change is also very impressive and makes for a great additional feature.”

De Schinckel also specified the STRIKE 4 to provide audience blinder for the Sint-Baafsplein stage. “I was a little bit sceptical about an LED blinder,” conceded de Schinckel. “But I was quite amazed by the output of the STRIKE. The strength of the blinder was incredible: the entire buildings surrounding the square were illuminated, once again highlighting the contrast between the concert and the old surroundings.”

While the STRIKE 4 provided more than ample audience blinding, de Schinckel also made use of the fixture’s bold array of effects. “The pan/tilt zoom and customisable dim curve are great features,” he continued. “The STRIKE isn’t just a blinder, it’s a blinder and effect fixture. This combination allowed me to have a series of different looks at my disposal to create variety for the various performing bands.”

A pair of Atmos foggers provided fog effects on stage. “The Atmos function is great from a very low output to fill the stage with a nice fine smoke curtain,” he commented. “During DJ sets, for example, the Atmos was able to fill the stage and the whole square with smoke on high output. Amazing decking considering we only had two fixtures!”

Thanks to de Schinckel’s strategic employment of the various CHAUVET Professional fixtures, the historic surrounding of the Sint-Baafsplein square was transformed into the most modern of live show experiences, setting the stage for the heart of the Gentse Feesten. “It’s an honour to be involved with this festival,” concluded de Schinckel. “And it’s great to know that the experience had by literally hundreds of thousands of people at the Sint-Baafsplein stage was enhanced by my lighting design – and for that I have to thank CHAUVET Professional!”