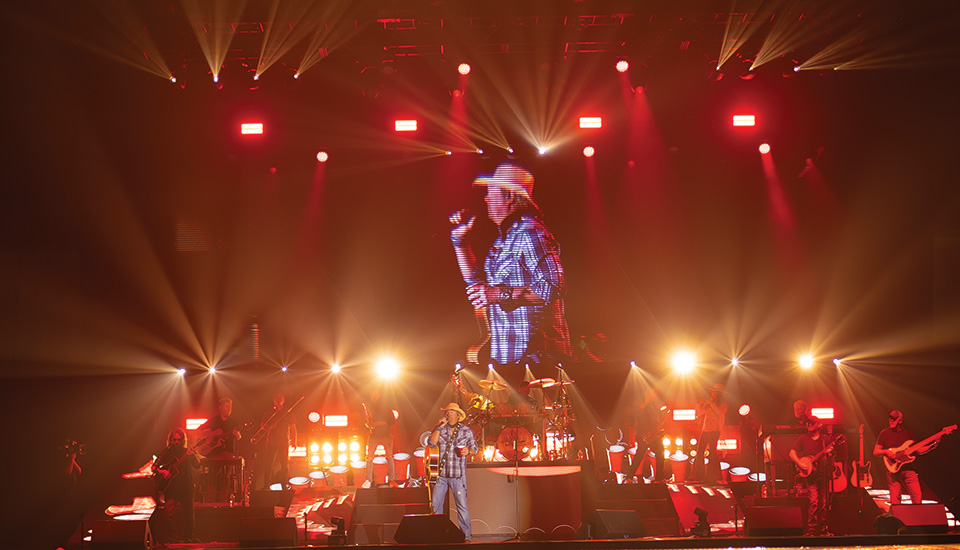 “Every reunion is a type of heaven,” an American philosopher wrote over 100 years ago. This piece of paradise was in the air at the Denny Sanford Premier Center in Sioux Falls, SD on Thursday May 20 when Toby Keith kicked off his “Country Comes To Town” tour.

Stepping onto the stage, the country superstar became the first major artist to embark on a tour since the start of the pandemic 14 months earlier. For the happy fans in attendance that night, Keith’s appearance represented not only a chance to enjoy live music again, but a reunion with an old and treasured friend.

“The connection with the audience has always been a big part of who Toby is,” said Seth Jackson of Darkroom Creative, who along with his partner, Nathan Alves handled the lighting, video and production design for the multi-city tour. “From the earliest days of his career, Toby has developed an especially close rapport with fans, doing things like bringing soldiers on stage to express his gratitude for their service, and arranging surprise deployed soldier reunions during his shows.” 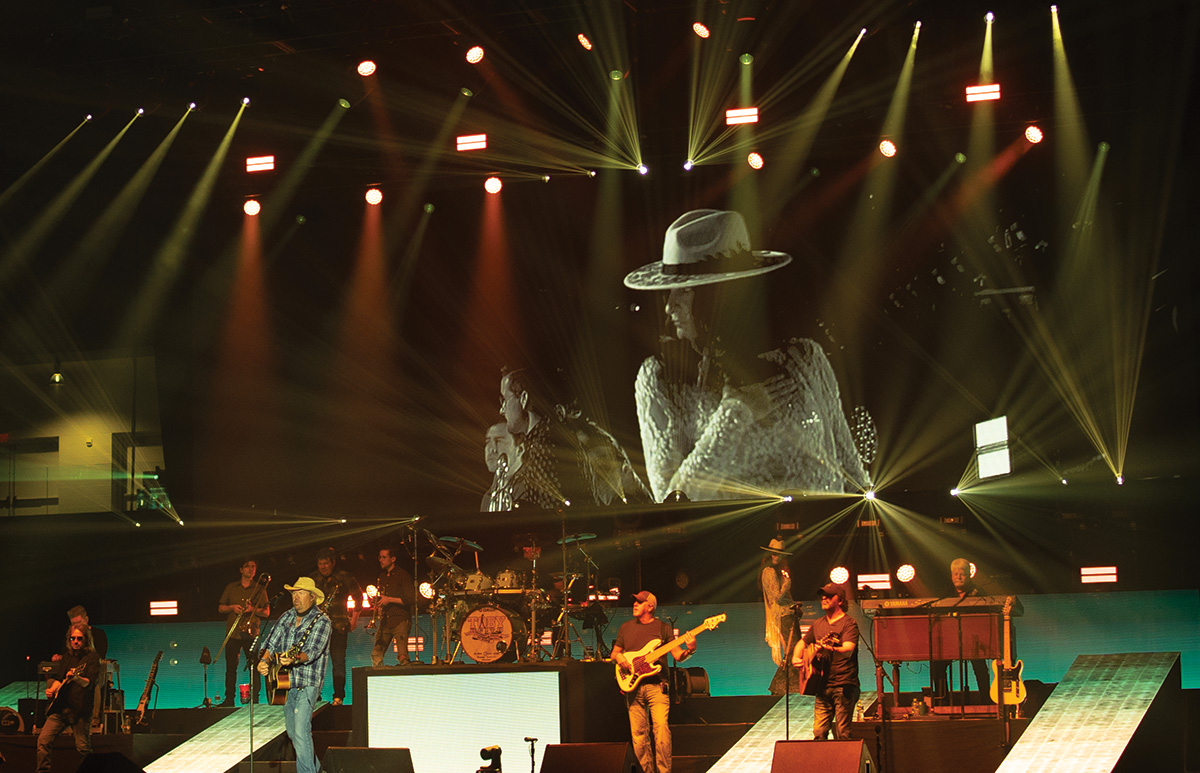 In recent years, Keith’s shows have featured a T-shaped runway to allow him greater opportunities to interact with the crowd. For Country Comes To Town, his design team took things a step further, creating a diamond shape runway with a pit that includes a full bar in the center, and other “party pits” around its perimeter – all intended to bring the artist and his fans closer together for their long awaited post-lockdown reunion.

Enhancing the warm, familiar mood of the evening, was an inviting lighting and video design that featured CHAUVET Professional Maverick MK3 Spot, Rogue R2X Wash and Nexus 4×4 fixtures. Like the rest of the lighting rig, these units were supplied by Bandit Lites.
Operated by LD Eddie “Bones” Connell, the light show served up generous helpings of broad audience sweeps, bold immersive colors and a warm white ambience glow from the Nexus 4×4 panels around the fan pits adjacent to the stage.

“We tried to be intentional with every moment in our show,” said Alves. “Every fixture, every LED tile, every effect was there to celebrate the relationship between Toby and his fans. I think the past year has made this personal connection more valuable to our audiences. We’re trying to lean into that from a design standpoint across all our clients at Darkroom Creative.” 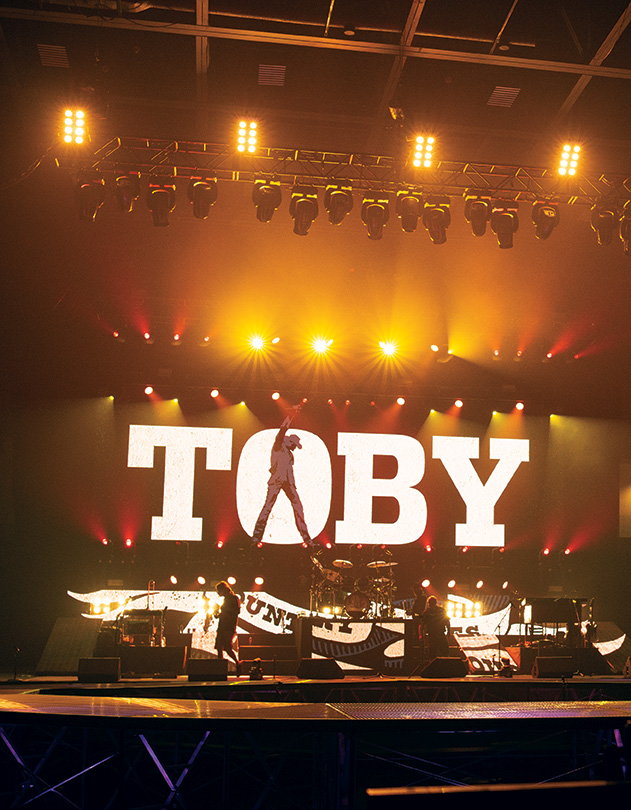 Like any reunion, this one didn’t just celebrate the moment, it also paid homage to some longstanding traditions and history, as Jackson and Alves brought forth images of their client’s storied past by weaving some evocative, classic looks into their design.

“I like the old shows that built our industry, always have,” said Alves. “When we were designing this show, we leaned on the history of Toby. He’s been at this awhile, and we wanted to make sure we acknowledged that. Some of the design choices, such as making our IMAG feel a bit more 90’s TV, came from that intention.”

Another redolent element of the design is its classic crowd lighting with big sweeps and swirling motions. “Eddie ‘Bones’ Connell, who will soon be celebrating his 25th year with Toby, lives for crowd lighting,” said Jackson. “For some of the familiar hits, we did similar crowd lighting patterns to what you might have seen in the ‘90s.”

Along with its classic looks, the lightshow also projected a bold, unflinching tone, reflective of Keith’s own determination to stand tall during the pandemic. “Nathan, Bones and I decided early on to push everything to heavy primary colors and color corrections, while keeping the pastels to a minimum,” said Jackson. “Even before the pandemic, this tour was going to have a bit of an edge and an attitude to it – we wanted to enforce that visually as well.” 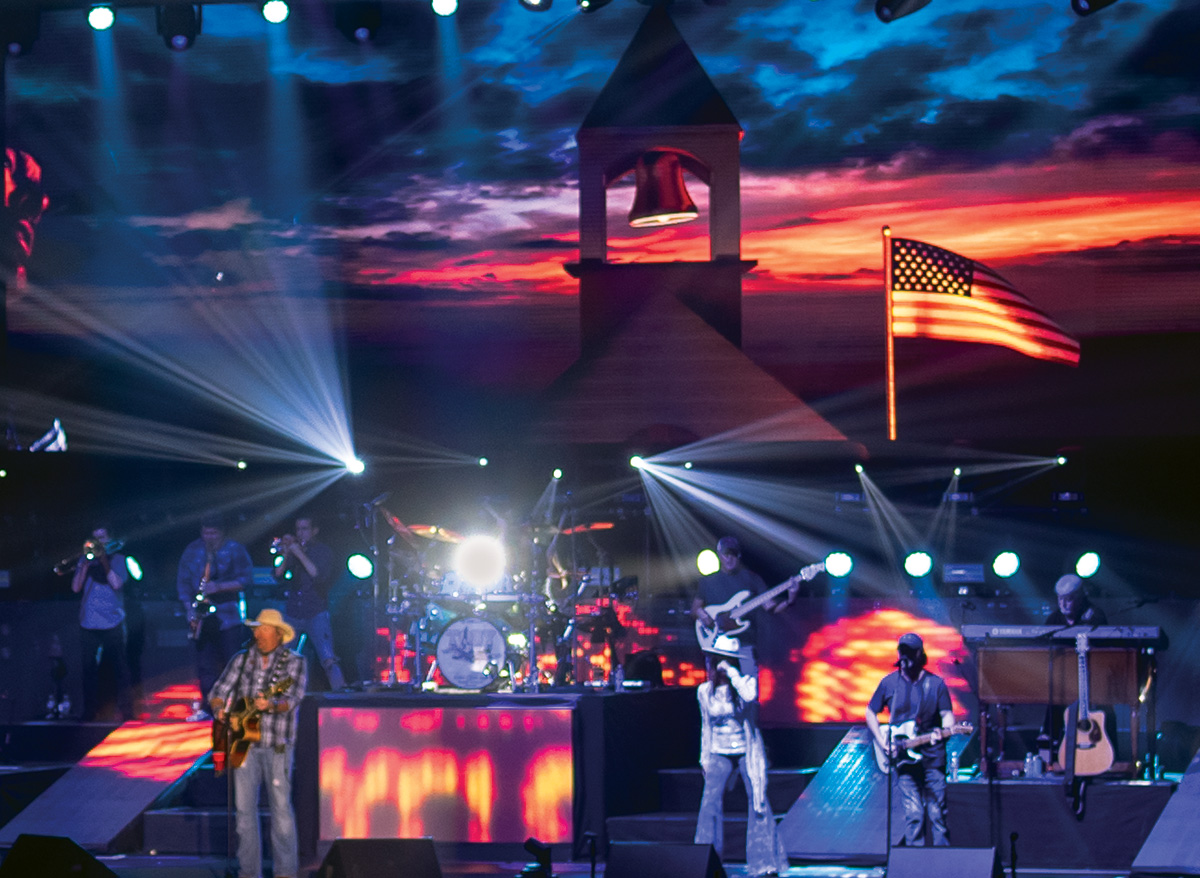 Helping to project this distinctive outlook were the 10 Maverick MK3 Spot fixtures in the rig. “The MK3s were our heavy gunners,” said Jackson. “They are big, bold and are great at filling underneath everything. They basically hold everything together due to their brightness and thick beam.”

Adding to the intensity of the show are its prominent video surfaces, which consists of a 4’ tall by 25’ wide overhead wall, along with a series of carts, onstage and offstage floor ramps, and a drum riser display.
We drive the intensity of all the video surfaces from the lighting console,” said Alves. “When creating this design, we made sure to look at all the elements in context with the big picture. Sometimes it’s about a screen, sometimes it is not. I am an enthusiastic fan of all-encompassing design. No silos. I think the old video team vs. lighting team dynamic does not work and we design without looking at these departments as separate entities. Roadie is a team sport.”

Key to ensuring the smooth flow of video and lighting are the rig’s 20 Rogue R2X Wash fixtures. “We needed the punch to get above video walls, while still have fixtures that were small enough to fit inside our custom touring carts,” said Jackson. “The R2X Wahes, along with the MK3s, fit the bill perfectly. The carts live upstage and carry all of the floor system inside of them, marrying up to video screens and sets. We did a lot of measuring and testing with Bandit Lites to find a light that could fit all of our parameters.” 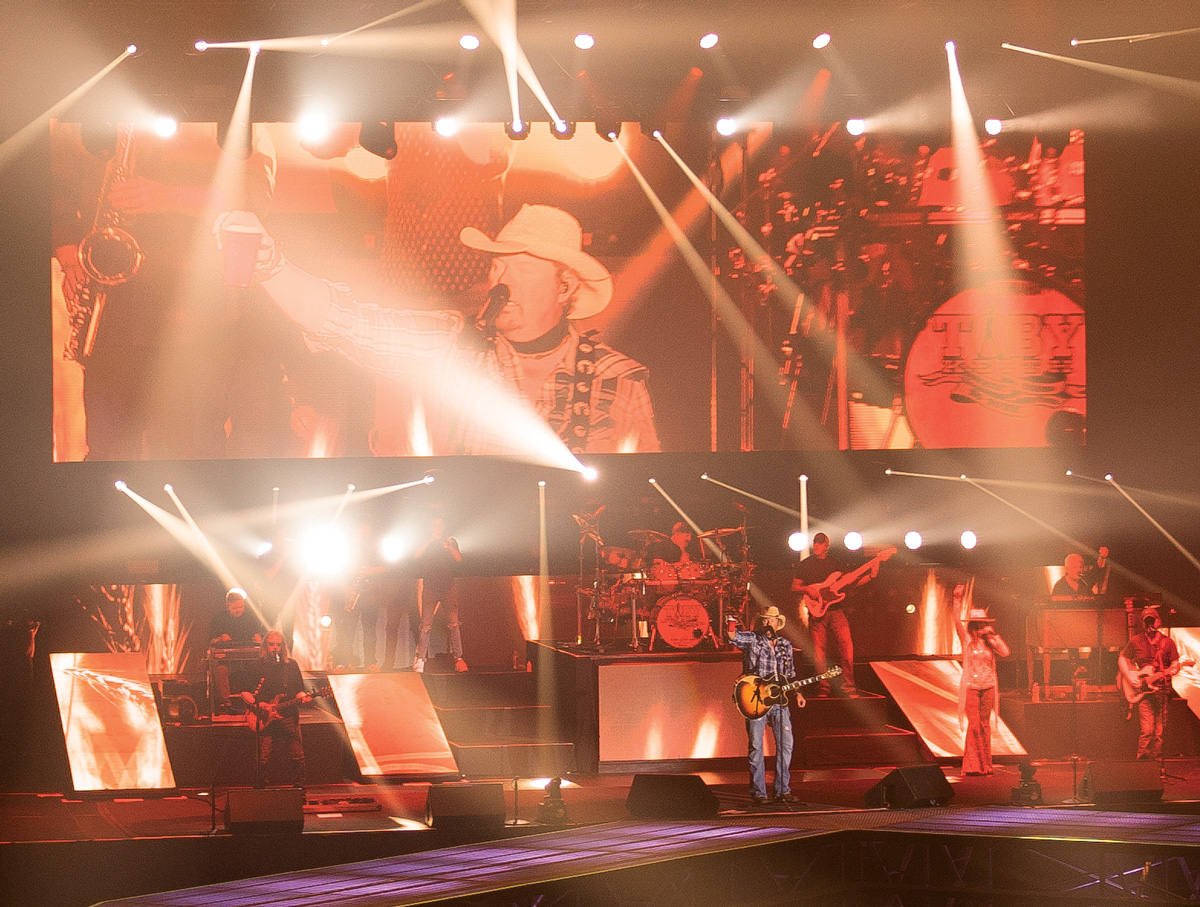 By balancing myriad elements into a unified panorama, the design team is not only celebrating the longstanding relationship between Keith and his fans, they’re also creating new memories.”

For Jackson one of the most inspiring ones came when his client performed American Soldier. “We do a hybrid for that song of elements that have been there since Bones invented the look, and combine that with new content and imagery,” he said. “The song gives you the chills anyway, but I felt like we really hit on something with it this year. It all just comes together.”

Coming together has been a powerful experience for all associated with Country Comes To Town, including tour manager David Milam, and tour coordinator Mark Sissel.
“There were a lot of emotions surrounding this show for us,” said Jackson. “God bless Toby Keith. He kept everyone on salary, having the set built just to sit on carts for a year, because he wanted to keep folks working throughout. Then he took the chance on booking dates based on where things were opening.” 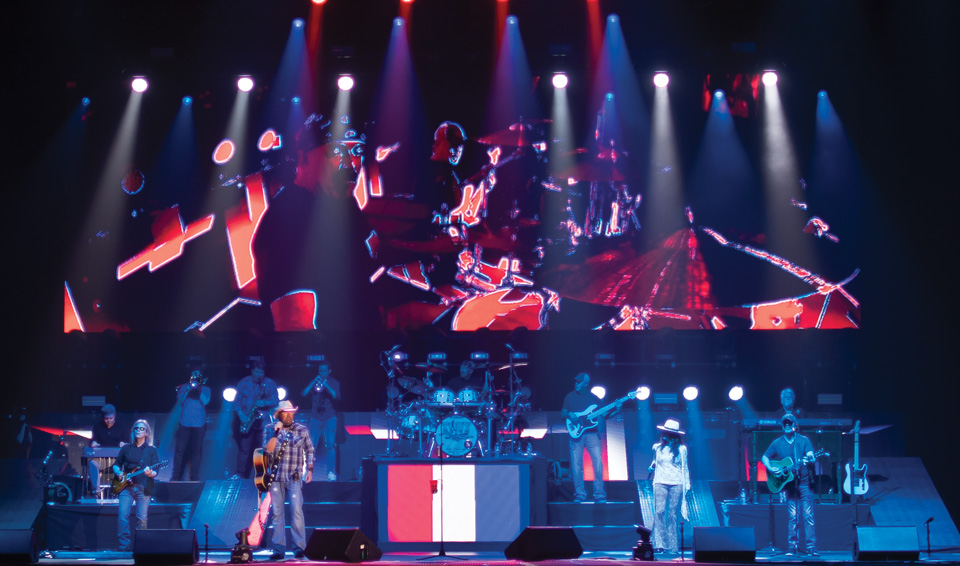 Keith’s actions gave his entire crew a greater sense of purpose, say Jackson and Alves. This purpose went beyond just putting on a show – and in the process it entered a place that, on this May night, could well be described as a “type of heaven.”