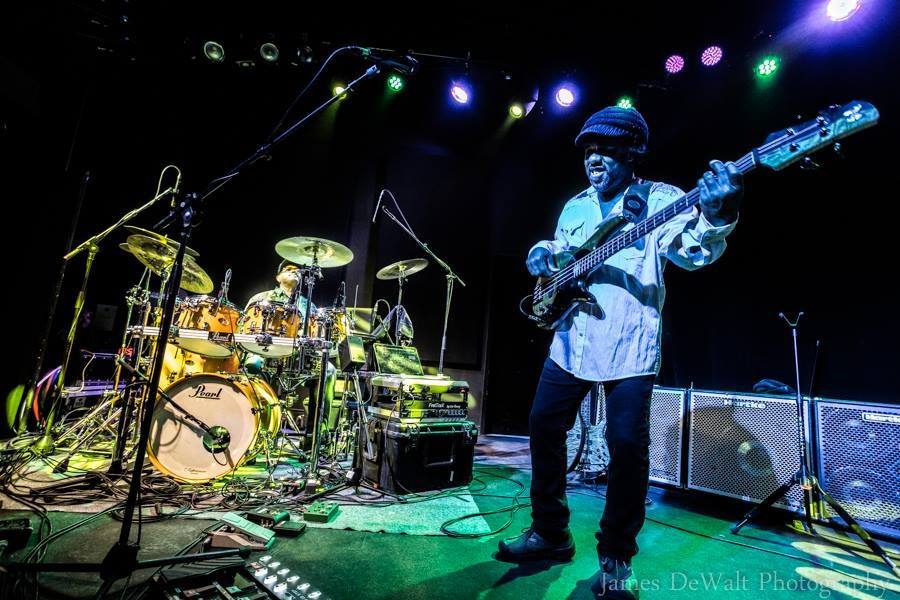 NEDERLAND, CO – The bass guitar is “utterly at the mercy” of Victor Wooten, one critic proclaimed about the artist Rolling Stone magazine named one of the Top Ten bassists of all time. The maestro’s mastery of his chosen instrument was on full display in mid-November, when his Victor Wooten Trio performed at the Caribou Room, a new live music venue just outside Boulder, CO. Pushing his bass to its creative limits, as he moved from finger tapped melodies to thunderous slapping sections, Wooten took his audience on a musical journey that wove its way through blues, jazz, fusion, rock and other genres. Keeping pace with him note for note was a Tim Farquhar lighting design that featured CHAUVET Professional Rogue and CHAUVET DJ Intimidator fixtures.

“Victor Wooten is a great artist, so obviously my goal was to keep the center of attention on him while still conveying emotions on stage with the lighting,” said Farquhar, who in addition to being a touring LD, is the house LD at the Caribou Room. “The Rogues and Intimidators were ideal in this regard, giving me the looks I wanted, without distractions.”

Farquhar used eight Rogue R2 Spot fixtures and an equal number of Intimidator Wash Zoom 350 units in his rig for the Wooten show. Half of his moving fixtures were hung on upstage truss and half were flown downstage.

“I relied on the upstage movers for specials that highlighted Victor and the other band members,” he said. “The Rogues were also used to create some nice mood-setting silhouettes on the wall behind the band. My downstage Rogues were used for washing the band and crowd, while the downstage Intimidators were for specials and audience lighting when the show called for it.”

The fixtures were all set about 20’ over the corner stage. Being that the stage is located in a corner of the 500-person capacity venue, there is a natural funneling effect that directs eyes toward its center. Farquhar accented this effect with the bright washes and by alternating the colors of his wash and spot fixtures, all while keep his design simple.

“When it comes to colors, I like to use them all personally,” said Farquhar. “I just try to keep it simple from song to song, so the focus is always on the artist. With Victor Wooten’s very emotionally charged music, I created themes for each song. I used RGB, CMY or Rasta colors throughout an entire piece. I busked this whole show, which allowed the lights to flow with a respond to the music.”

By taking this approach, Farquhar was in sync with the philosophy of Victor Wooten himself. In his book The Music Lesson, the five-time Grammy Award winner wrote that though each instrument must play together in a band, each must also have its own distinct voice. On this night in Colorado, the three instruments of the Victor Wooten Trio were joined by a fourth voice, in the form of some subtly evocative lighting.