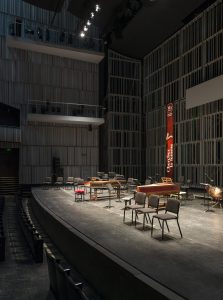 BRUGES, Belgium — The Belgian city of Bruges might just be one of the prettiest towns in Europe. Not only does the entire medieval old town enjoy world UNESCO heritage status, the city’s rich tapestry of canals and waterways has long since garnered Bruges the accolade “the Venice of the North.”

During the city’s well-earned status as “European Capital of Culture” in 2002, the Concertgebouw Brugge – a concert venue and multicultural centre accommodating more than 1500 visitors – was built to provide the city’s inhabitants and many tourists with a home for some of the best classical music orchestras in the world. Taking centre stage in a recent refurbishment of the concert hall were 20 CHAUVET Professional Ovation F-265WW fixtures, specified by local install specialists Sotesa.

With the main hall regularly receiving high-profile symphonic orchestras such as the Anima Eterna Brugge (artist in residence), Brussels Philharmonic, Swedish Chamber Orchestra, Budapest Festival Orchestra and the BBC Scottish Symphony Orchestra, the venue required a practical solution to provide general illumination for the musicians on stage. With their incredibly soft and even flat field of warm white illumination, the Ovation Fresnel-style LED fixtures were chosen to replace the outdated and unreliable incandescent house lights.

“Aside from the fact that the old incandescents used a lot of electricity, it could be uncomfortable at times for the musicians because of the heat they generated,” commented Geerolf Jacques, Coordinator of Stage Technology at Concertgebouw Brugge. “One of the key advantages of the Ovation fixtures is that we don’t have to worry about leaving the lights switched on for longer periods of time for rehearsals and shows.”

Given the practical issues of the 12M high roof in the concert hall itself, finding a suitable lighting fixture to provide the necessary coverage from this relatively large distance was of paramount importance. Thanks to their 230W LED engine with an output comparable to that of a 2000W Fresnel, the Ovation fixtures are more than capable enough to match up to their incandescent predecessors.

“The Ovations have a huge output, even with the 12M height of the ceiling,” commented Jacques. “They provide both a beautiful warm white light for general light and a clear reading light for the musicians reading their music.”

One of the key concerns for venues in implementing LED lighting is the degree to which the warm unobtrusive glow of the incandescent can be accurately emulated. Thanks to the incredibly high CRI index (95+) of the Ovation fixtures, the output manages to retain a natural quality despite harbouring all the advantages of LED.

“Interestingly, the musicians didn’t really have a reaction to the new installation, which can only be a good thing, as it means they didn’t see a difference at all,” continued Jacques. “What’s more, when you look at the stage from the auditorium, the orchestra is more beautifully lit, which is very appreciated by the production people.”

Thanks to the Ovation fixtures, Concertgebouw Brugge is able to concentrate on doing what it does best: proving world class orchestras with the platform to provide Bruges with countless hours of musical enjoyment.