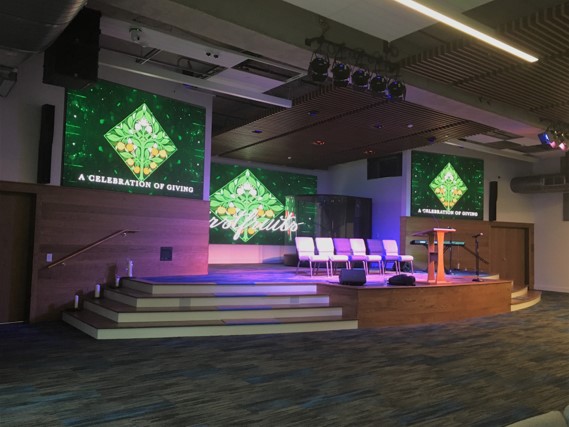 SAN ANTONIO – With its arched columned doorways and peaked roofs, the First Baptist Church of San Antonio’s campus is reminiscent of early Texas architecture. The church moved into this stately building in the early 1900s, but its roots actually stretch back much further, all the way to 1861, only 16 years after Texas became a state, when a group of 13 worshippers formed a congregation in what was then a remote trading outpost.

Although steeped in tradition, this thriving church is also firmly planted in the 21st century. Proof of this takes place every Sunday morning at 11:00, when worshippers gather just around the corner from the main church building at the “4th Street Crossing.” There they experience LOGOS, an uplifting band-led contemporary service that has become an instant favorite of young people since it opened in early 2016.

Adding to the contemporary vibe of services and events at the youth-driven worship center are three large video walls installed in January 2019 by San Antonio Sound and Light, using CHAUVET Professional F4 LED panels. The vertically oriented middle wall is 20’ wide and covers almost the entire width of the stage. Flanking it are stage left and stage right walls that are each 10’ wide.

The three video walls create an engaging and immersive environment for LOGOS by displaying images that support the praise music played throughout worship services. They also connect worshippers to services by showing words from scripture.

“All of us, along with the church’s media team, wanted LED walls over projection video, because we felt it would be more impactful and more contemporary looking,” said Mark Stevens, System Designer for San Antonio Sound and Light, which designed the original AVL system for 4th Street Crossing, in addition to installing the video walls. “Jeremy Harper, the Director of Media Ministry, was instrumental in pushing this along; while Kevin O’Brien, the SASL Engineering, performed all the architectural MEP drawings; and Mitch Livermore, the SASL Project Manager, made sure the many physical changes to equipment, rigging and cable paths were done properly and professionally.”

Changes to the lighting and sound system were necessary when installing the video walls because of the room’s relatively low (13’ maximum) ceiling. “There were some sightline issues,” said Stevens. “We had to move some speaker clusters, and the front of stage house lights had to be shifted to make the video walls easier for everyone to see.”

The high contrast images on the 4.8 pixel pitch F4 panels were especially important given the size of the room, affording a clear view even to those worshippers in the front rows, according to Stevens. He was also happy with the easy-install wall mounting features of the panels. “Aside from the sightline issues, we had a smooth installation process with the tiles themselves, and when people saw the results, their reaction was ‘wow!’” he said.

So, even though it’s located around the corner, only 340’ from its parent church, 4th Street Crossing allows worshippers to step into a very different, more contemporary world. That this 158-year-old house of worship is able to offer this experience to young people, while still retaining its traditional identity, means that it is likely to thrive for many more years to come.