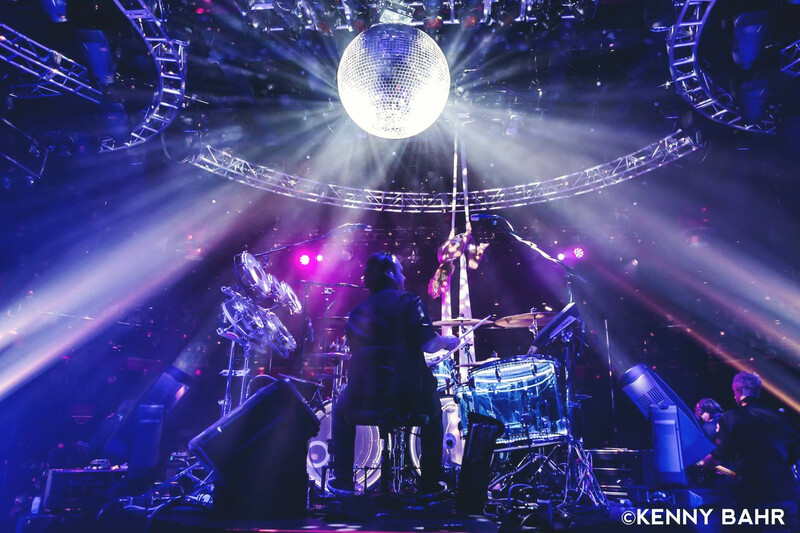 El Monstero, a Pink Floyd tribute show formed by former members of the Top 40 band Stir has been a holiday tradition in St. Louis since 1999, selling out seven or eight shows in and around the city every December. Many of those fans filling the seats, return every year.

Every year, the eight-piece band introduces a bag full of new surprises with special guests (sometimes over 60 at a time) and wildly original antics. Supporting all of this originality is a bold kaleidoscope of never-repeated looks created by the show’s lighting designer, Chip Self of Logic Systems.

Self has been lighting El Monstero for the past six years. Like any designer, he appreciates the steady and continuous workflow. But as anyone who’s ever had a reoccurring project knows, there is always the danger that complacency can set in when one is asked to design a show year after year. 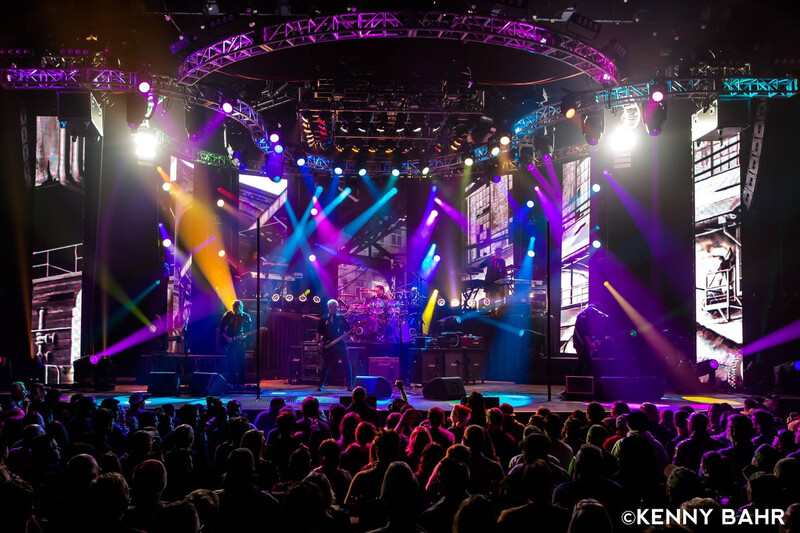 The expansive visuals that flow seamlessly from the El Monstero stage every season, without even a hint of backtracking, are a testament to how Self has avoided this pitfall. His flowering stream of fantastical looks moves in complete harmony with the uninhibited energy of his client’s annual show.

We asked Self to share some insights into how he makes his annual El Monstero designs an exercise in renewal rather than repetition. This is what he had to say.

The age-old question is how do you keep a consistent theme year after year while still keeping your show fresh?
“My business provides production for lots of one-offs and festivals. As a result, I get a good look at a wide range of design and programming ideas from a very diverse set of shows and designers. I find ideas, or the seeds of ideas by watching other creative people work. After decades of that, I feel like I’ve developed not only a deep list of ideas to pull from, but also a personal aesthetic for how I put it all together in ways that work for me and my vision.

“As to keeping this show fresh, from the very beginning, I promised myself that I would never repeat a design. Otherwise, I would inevitably fall into something, and it would get stale. I would get bored; the fans would also get bored – and then the whole thing will start to suck. By disciplining myself to do something new and different every time, I eliminate the possibility of it getting stale, or getting bored. There’s always the possibility it might suck – but such it is when you take risks.”

There are upwards of a dozen people on stage at an El Monstero show, sometimes many more. Does this complicate your job or make it easier?
“The core band is made up of eight members, but then we add in soloists, guests, aerialists, dancers,…. and it can become 20 pretty quickly. From time to time, we add a symphony on stage, which gets us up to around 60 or more people at once. It can be a challenge to light it all in a way that maintains contrast and texture. With a large group on stage, it’s easy to use too much light, and just wash everything out. It’s also very easy to get to a place where every person is full brightness, and it’s tough to distinguish a focal point for that moment, when there’s a person singing or playing a solo.

“Over the years, I’ve developed and stolen some tricks that allow me to create a hierarchy of how illuminated someone is – ranging from full silhouette to full spot. For those large groups, it’s often helpful to stick to a more saturated palette, so that it doesn’t build up and get too bright. I guess the answer would be to create as much visual dynamic range as I can. More often than not, that’s a matter of using less, than just adding more and more.

Are you always trying to introduce new fixtures into your show from one season to the next?
“Always. I nearly always have some new thing to try. Sometimes I use rep samples, and sometimes I buy stuff specifically for the variety. I have a number of sections in the show where I leave space to experiment with new fixtures. I also make a habit of using things ‘wrong.’

“For example, this past winter I used LED cyc strips as my primary wash fixture for the stage. I really enjoyed the variety of the light source being a different shape than people expect. Things like that keep it interesting and fun for me, and hopefully for the audience. Pixel mapping those strips allowed me to even further blur the line between light and video. As a general rule, if you give me a piece of kit to play with, I can quickly find an interesting way to use it wrong.”

Will you emphasize different parts of your show from year to year to keep looks fresh? In other words will you focus more on blinder on year and aerials the next or more on video one year and less on video the next?
“My associate LJ Edward kills it on video. One of my secrets is to just keep designing in more real estate for video, and let him run with it. He always makes me look good. As to my design, I try to keep it fresh by reprogramming most songs each year. Every couple years, I just delete my file and start from scratch. Every time I re-program, my approach evolves a little, and the product gets better.

“Ryan Lilly is our crew chief, and a very talented designer by his own rights. He is instrumental in helping me do this. He does a great job interpreting my crazy ideas into something that’s actually build-able and tour-able.” 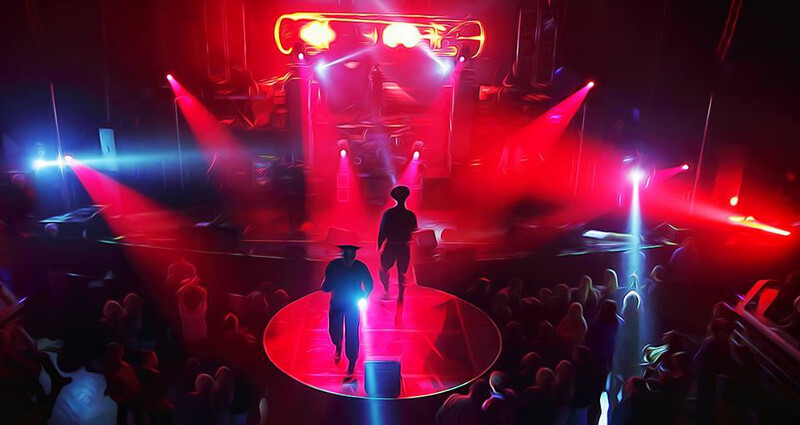 Is changing color schemes part of this strategy?
“I keep a spreadsheet of songs and the color pallet I’m using. I’ll review the show as a whole to make sure I’m not leaning too heavily on a certain set of colors, because left unchecked, I tend toward nothing but reds and purples. When I see that I’m building up on a set of colors, I pick a song or two that I think could work with a different palette, and force myself out of my comfort zone into different colors.

“More often than not, I like the new colors better than what I had before, because it’s something fresh and uncomfortable. Sometimes in a run of shows, the band will change-up the setlist each night. This adds a new logistical challenge so that I don’t end up with two songs back to back with the same color pallet. In those cases, I often create B versions of a few songs so that I can keep it from running together too much.”

El Monstero is a holiday show. When do you begin designing it?
“I typically start designing a couple months out, and spend a week or two in pre-vis, once the design is pretty complete. In the beginning, it was pretty back & forth collaboration. At this point, the band just gives me an overall theme and I run with it. These days, the band doesn’t necessarily know what the set looks like until load in. They give me nearly complete design autonomy, which is really cool. I find that the freedom and responsibility of getting that right pushes me to be more creative, and more thoroughly think through how my decisions will impact other departments like video, pyro, show techs, etc.” 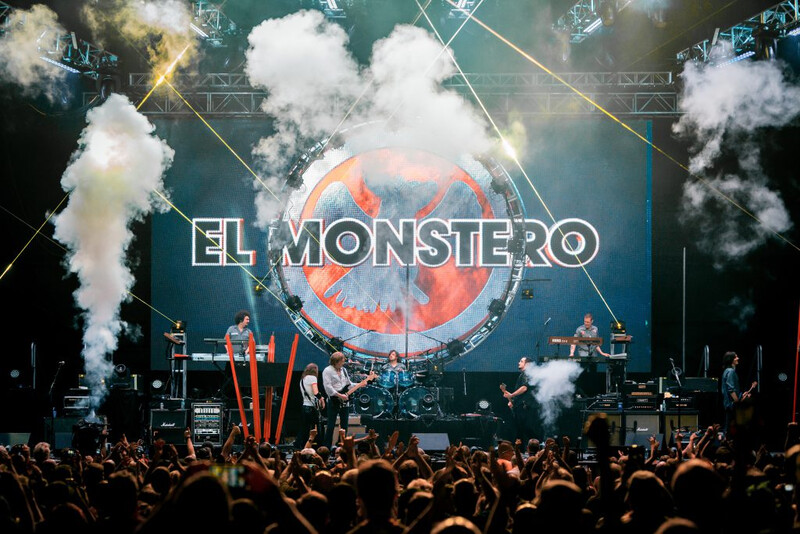 What is the one consistent look you hope fans take from an El Monstero show from year to year?
“I hope there isn’t one. My goal is to create something that’s just what the music should look like and feel like. My goal is never to take attention away from the performance, but to expand upon it in a way that people don’t think of as separate. If I’m doing my job well, it’s just what the music is supposed to look like.”

What advice would you give a designer who has to light the same show every year?
“Force yourself to stay creative and fresh. Delete your file and start over every now and then. Watch as many other people work as you can. Pay attention and take notes. Make friends with show photographers, and go out of your way to make sure it’s easy for them to get great shots. Those photos are the only lasting evidence of your work. Working with them, instead of against them, ensures that your work is represented accurately, and in its best light (pun intended). If you give them enough face light and contrast to get great shots, they’ll make you look like a genius. If you don’t they’ll tweak the balance until the face is correct, and make you look like an idiot. One thing’s for sure, the band looks at the photos and is judging you on them.”