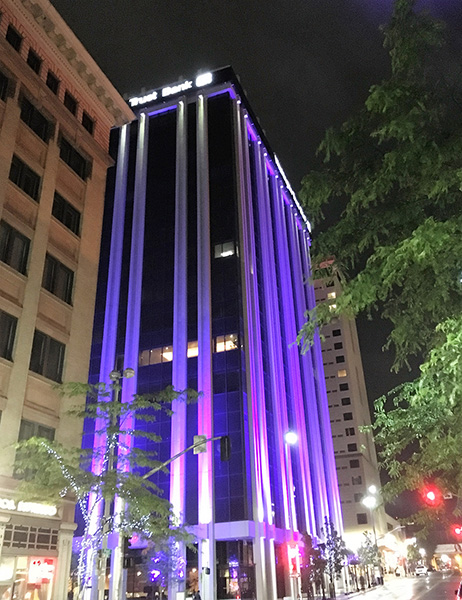 SPOKANE, WA – Perhaps it’s because of their delicate beauty and captivating pale purplish hue, or maybe it’s because they signal the arrival of spring every year in temperate climates…for whatever reason, the syringa – or “lilac” as it’s more commonly called – is the subject of more festivals than just about any other flower. From Pine Mountain, California, to Boston, Massachusetts, tens of thousands of Americans turn out every year to honor the prolific plant. However, no place does this with quite the verve as Spokane, the “Lilac City,” which holds a week long Lilac Festival, featuring a parade, concerts and, in 2016, a stunning light display on a local landmark created with COLORado fixtures from CHAUVET Professional.

A contemporary structure, the Washington Trust Financial Center has fluted shafts running up its entire length on three of its four sides. Hass arranged his COLORado fixtures on schedule 40 pipes and a 50-lb. base, positioning this structure about 15’ up the vertical columns.

“The COLORado 4 IPs and COLORado 2s were grouped together and put 15’ back so we could achieve the best angle and use of all the light coming from the fixtures,” he said. “We’ve used the COLORados before, so we were confident that we would get the best results. The IP rating was also very helpful since it rained during the install.”

Given that the Washington Trust Financial Center was being illuminated to celebrate the lilac, a flower that has lent its name to a specific hue, Haas had to be certain that his color rendering on the building had to be spot on. The COLORado 4 IP, which includes white LEDs to create a broader more nuanced color palette, helped him achieve the precise results he was after.

“The COLORados were phenomenal at giving me realistic color,” he said. “Not only did the color look great in person, it also came off well in photos and on video. This was very important, because the building is at a corner where the Lilac parade turns, so a lot of professionals and other people set up for photos at this spot.”

Although the weather was fine for the parade, Haas and his crew had to deal with less than ideal setup conditions. “The rain was a factor to contend with,” he said. “Plus we didn’t have a lot of setup time. We had four guys on the job, and we got everything set up in about eight hours. As always, a team effort made good things happen. My account manager, Steve Bolt, and Billy Rask and our tech team deserve a lot of credit.”

For Haas and the AMP’D Entertainment team, the hard work was well worth the effort. “It was one of our most successful projects,” he said. “We got the most likes ever on our Facebook pages about this Lilac lighting. So many people have come up to me to say how vibrant the building looked.”