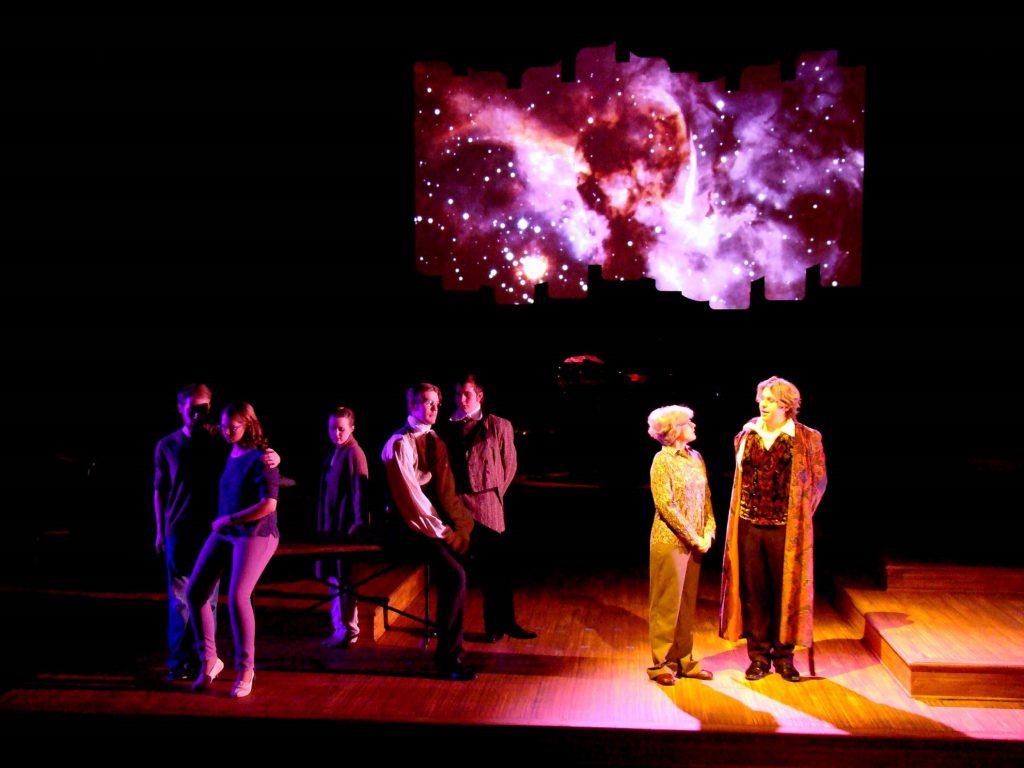 COON RAPIDS, MN – Moisés Kaufman’s moving drama 33 Variations follows the transformative journey of a musicologist, who, after being diagnosed with ALS, sets out to learn why Beethoven felt compelled to write 33 variations of an otherwise unheralded Anton Diabelli waltz. Taking place in both Beethoven’s time and our own, the play raises profound questions about the creative process and the quest to find meaning in life. Lighting such an ethereal production requires a design that’s as subtle, varied and delicately balanced as the Kaufman’s beautifully crafted play itself.

Peter Lerohl achieved this feat in a recent production of 33 Variations with help from a collection of CHAUVET Professional fixtures acquired from Monkey Wrench Productions.  Lerohl, the Technical Director of Theatre at Anoka Ramsey Community College, used six Ovation E-910FC color mixing LED ellipsoidals, positioning three of them on each side of the playing area for downstage, center stage and upstage side lighting. He also used four Rogue R2 Washes, arranged across the first electric, which for this show was at the upstage edge of the acting areas.

The performance features of the Chauvet fixtures helped Lerohl capture the elusive essence of Kaufman’s modern masterpiece in light. “This is a very powerful and thought provoking drama that moves seamlessly back and forth in time and place,” he observed. “There are multiple scenes in the present day and in the early 1800s, with characters from both time periods often appearing on stage simultaneously. I designed projection, lighting, sound and scenery for this production. I think the biggest challenge was to create a fluid and cohesive design that supported the story, without distracting the audience or calling attention to the technology itself.  Having the Ovations and Rogue R2s in my plot allowed me to pull colors from my projection images and use them in my side and top lighting in ways that unified the design visually.” 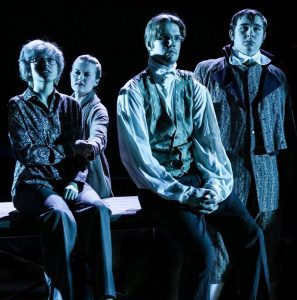 Using the Ovation E-910FC to produce a wide range of colors, from subtle tints to intense more saturated hues, allowed Lerohl to convey the movement of space and time on stage. “At some points in the show, we used the Ovations to suggest warm interior candle light. At other times, they created intense exterior sunlight and daylight. They really excelled at allowing us to create surreal effects. For example by using the pinks, ambers, and violet on a projected image of the Angel Nebula, we created a very evocative mood in a scene that  had the characters from both time periods together in limbo.”

The Ovation E-910FC and Rogue R2 were also used in combination to colorize the stage in calming spiritual blue/green side light and lavender top light that unified the characters in a scene where they appear together outside the confines of normal time and place. Heavy saturated blues and violets were used during scene transitions.

Lerohl often coordinated the colors from the Ovation E-910FC with video projections.  For example, during a scene when the main character undergoes an MRI, he called up uneasy yellowish green colors, matching them with video projections of an eerie sequence of MRI imagery. Later, the Ovation fixtures rendered pale lavender and blue to underscore the vulnerability of the lead character as a patient.

“The ability the Ovations gave me to mix subtle tints that were complementary to costume colors and skin tones was essential,” said Lerohl. “Also critical was the fixture’s smooth color fading in tight cue sequences – there was no more need to black out for scroller changes! The smooth dimming allowed seamless integration with conventional fixtures, and also the quality of color mixed and balanced well with our conventional fixtures.”

When scenes in 33 Variations had characters from two time periods onstage simultaneously, the Rogue R2s made it possible to isolate and separate them with light. This made them appear as if they were in two different worlds, even though they were often standing only a few feet apart.

“The R2’s wide zoom range allowed me to integrate tight spots of top light, as well as wider washes of top and high side light, with all my conventional fixtures,” said Lerohl. “I could not have achieved this high level of unity and cohesiveness without these fixtures, especially in a projection heavy show that moved back and forth in time and place.” 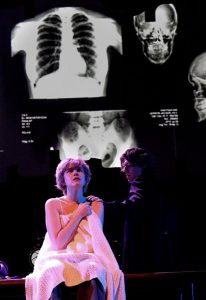 For Lerohl, the addition of the CHAUVET Professional fixtures fulfilled a long-held goal. “Historically we used incandescent fixtures with scrollers for top and side light,” he said. “We were contemplating going to LED fixtures for some time, but we didn’t make the move because we were dissatisfied with the limited color mixing capabilities of the products in our price range. We are a small college theatre with limited budgets, and anything I purchase has to serve the needs of multiple events each year, including college music department concerts, various institutional programming and of course our theatre department productions.”

Lerohl found a fixture he believed could meet his varied needs when he saw the Ovation E-910FCs at the U.S.I.T.T. conference. “I was impressed with the quality of their color and their intense output,” he said. “I had a demo unit for a few weeks last spring and hung it in one of my side lighting positions along with my existing ellipsoidal/scroller combination. The Ovation fixtures were able to mix color that matched my incandescent ellipsoidals. They also put out comparable intensity in the warmer colors and much more saturated cool colors.  In short, the colors were beautiful! This instrument is capable of producing subtle tints and saturated color all across the spectrum. I use 25°-50° zooms, which have excellent optics and allow flexibility depending on the size of my acting areas.”

When Lerohl was acquiring the Ovation fixtures, Seth Scott of Monkey Wrench Productions suggested he add some Rogue R2 Washes to his stock plot. “I was skeptical at first,” he said. “However after trying out a demo unit, I was impressed with the range of color, intensity, and wide zoom of these fixtures – especially considering the reasonable price!”

In the end, the new fixtures helped Lerohl create multiple and very varied looks for a moving drama that explores the fascinating power of variations. 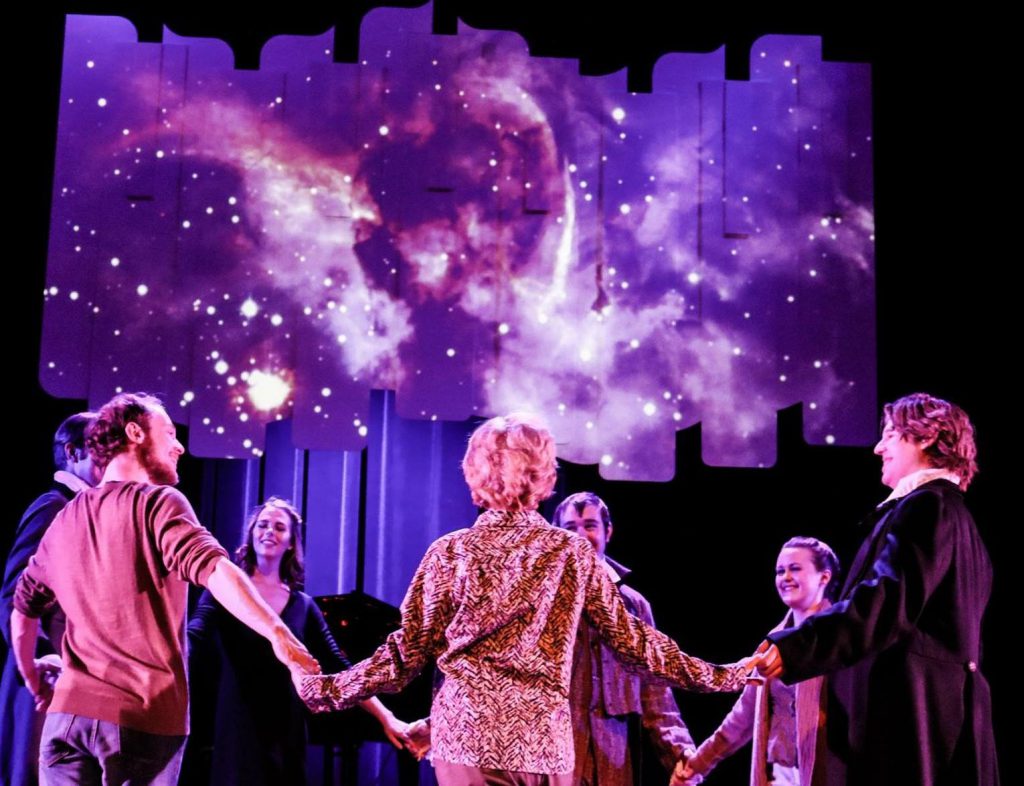