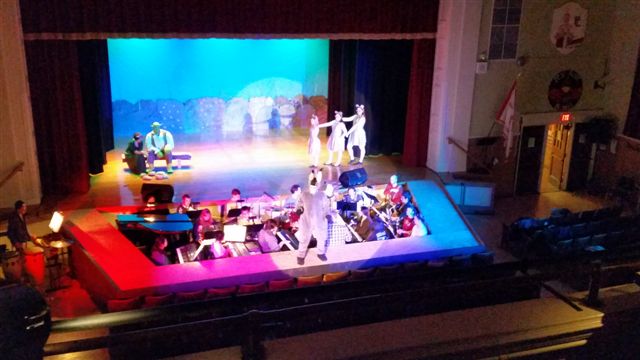 POMPTON LAKES, NJ – Tough economic times have never discouraged the citizens of Pompton Lakes from investing in the future. In 1932, while the United States struggled through the Depression, the city built a new state-of-the-art high school. That school is still standing, so too is its commitment to staying in the forefront of education, as evidenced by its new LED theatrical  lighting system anchored by a collection of COLORado and Ovation fixtures from CHAUVET Professional.

“Pompton Lakes High School made a choice to move forward with LED technology and everyone from students and parents to teachers and administrators couldn’t be happier,” said Bill Nelson of Nelson Enterprises, which installed the new system. “This project was completed just in time for the school’s production of Shrek The Musical. With ten ellipsoidals, twelve battens and three cyc lights, the stage is filled with color.” Nelson replaced two rows of  “outdated continuous strip lights and a mishmash of 10 incandescent ellipsoidal fixtures” with an LED rig that features 12 COLORado Batten 72 Tour fixtures, hung in two rows of six on stage pipe battens, which were part of the original rig. Also included in the rig are three Ovation C-640FC cyc fixtures upstage and 10 FOH LED ellipsoidals — all controlled by a Strand Lighting Neo console. “The school still has three quartz scoop lights that are used primarily for work lights and band/orchestra,” said Nelson, “but we hope to replace them soon with LED fixtures.”

The advantages of Pompton Lake High School’s new LED system extend far beyond the looks created on stage. The school’s head of buildings and grounds, as well as the board of education administrators, appreciate the energy savings that have resulted from the new system along with the extended life expectancy of the LED fixtures, according to Nelson.  Plus the stage is considerably cooler and valuable space has been saved by eliminating rheostat dimmers.

“There are a lot of hidden benefits of stepping into the future with LED technology,” said Nelson. “Now Pompton Lakes no longer has to rent or borrow gear for different productions. The LED gear also provides students with a chance to learn the latest technology and get involved in using new high-tech tools without having outside sources running the equipment.  With multiple LED lighting fixtures plugged into a few outlets run by computer consoles, the new system actually makes economic sense. “We recently worked with another high school that I won’t name that had a similar project to Pompton Lakes,” continued Nelson.  “However, rather than moving forward with LED technology, the school elected go with traditional incandescent fixtures.  So rather than replacing the dimmers and power distribution, saving money and allowing the purchase of additional fixtures, this school is continuing to rent conventional fixtures to facilitate its productions.  The school has realized no energy savings, no maintenance savings and no heat savings.”

Based on his experience, Nelson has become a strong advocate for LED theatrical systems in schools. “Schools of all sizes are appreciating the benefits of LED systems,” he said. “We recently installed six Ovation E-190WW units and eight COLORado Batten 72 Tours at a middle school in New Jersey.  Schools are supposed to educate young people for the future, and LED stage lighting is certainly part of that future.”