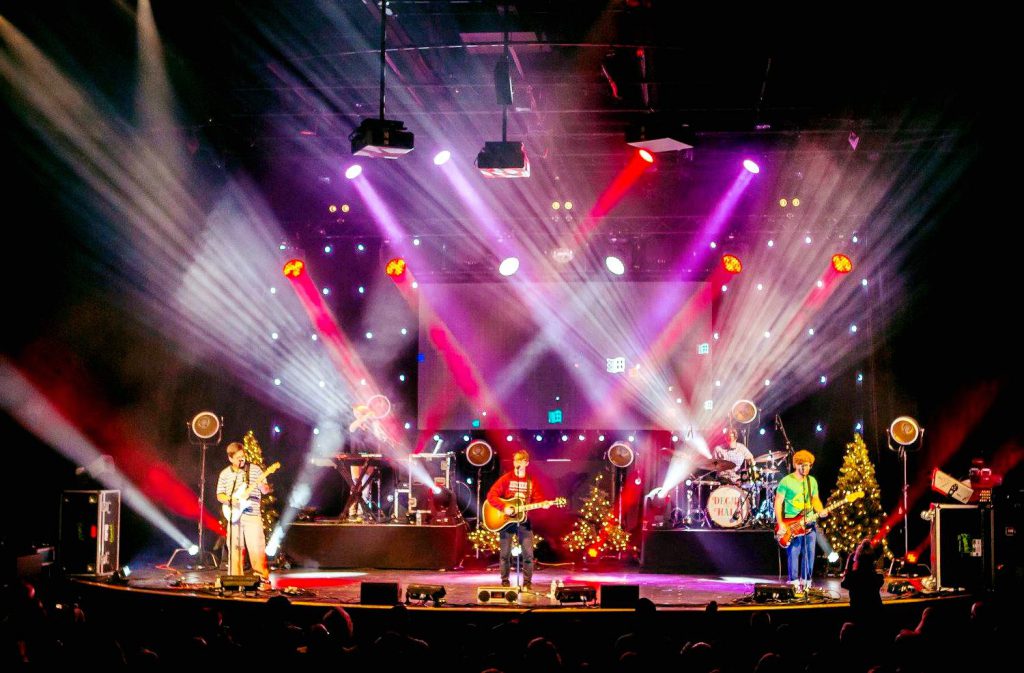 NASHVILLE – Tenth Avenue North released their Gold certified Over and Underneath debut album in 2008, but the Dove Award-winning Christian band’s musical virtuosity stretches back much further in time. This is beautifully evident in their current Decade The Halls tour, which features a decade-by-decade cornucopia of Christmas music covering more than a half century.

Supporting this musical mix with richly colored visuals that evoke images of different Christmases from times past is a Mike Marcario lighting design that features CHAUVET Professional Rogue and Nexus fixtures, supplied by Bandit Lites. Marcario’s transformative lighting seems to move through time with the music, changing colors and the tempo of its movement to reflect the passage of holiday seasons through the years.

“This show is definitely fun to do from a lighting standpoint,” said Marcario. “We need to be able to create looks for every decade, while avoiding carrying gear from each one. We change up the kinds of colors and gobos we use for different decades. The show begins very warm with little movement, but as we approach the 1990s and 2000s, we have added more aerial effects and color, also pulling out more tricks from the fixtures to create a contemporary feel, while still maintaining a holiday mood throughout the entire show.”

Making this feat especially impressive is that Marcario accomplishes it with a rig that fits in a bus trailer. To add to his challenge, the November-December tour stops at large churches, many of which have limited available power and rigging points.

Helping Marcario achieve his design goals despite these obstacles are the six Rogue RH1 Hybrid fixtures in his rig. Positioning four of the 330W beam/spot movers on the downstage edge of two 8’x 8’ risers, and two on upstage road cases, he has them fill a wide variety of roles. Using their frost filter, he calls on them to serve as “old school pars,” effects that create engaging crowd texture. Later in the show, when the songs become more contemporary, he relies on their tight zoom and effects system to create big aerial looks.

“The versatility of the hybrids is critical to this show,” said Marcario. “As always with bus trailer tours, transportation space is limited. Plus, some venues have low power and no rigging points, which limits my options. This, coupled with the need to create a different look for each decade, means that I have to expect a lot from my fixtures. What makes the Rogues so valuable, aside from their compact size and efficiency, is that they can do so many things well.”

For key lighting and front color washes, Marcario is relying on the Nexus 4×1. “Given that the tour stops at churches, we don’t always have downstage front lighting or spots,” he said. “I count on the Nexus 4×1 to be my go-to shin kicker. They give me clean color mixing, across all dimmer levels, and an even field of light.”

A 16’ x 8’ video wall hung from upstage truss is at the center Marcario’s design. Although impressive and critical to conveying the mood of different decades, the wall inevitably creates dead space in the area around it. Marcario addressed this issue by filling in this space with 15-meter strands of CHAUVET DJ Festoon hanging décor lights.

“My goal was to create a super low resolution ‘pixel curtain’ that could fill the space around the video wall,” said Marcario. “I didn’t have space in trailer for mounting hardware or more cases, so the Festoon was perfect. We ended up with all these RGB bulbs that fill the negative upstage space beautifully. Then after the show, they collapse to fit in the space of a standard LED batten.”

Aside from filling up dead space around the video wall, the Festoon strands also create starry night effects. Combined with the “snowflakes” and Christmas trees on stage, this works to evoke a classic holiday ambiance, a mood accentuated by the costumes that members of Tenth Avenue North change into during their show. All of this works to create an immersive traditional feeling on stage…with a little help from modern LED technology that lighting designers never could have imagined even putting on their Christmas wish lists back in the day. 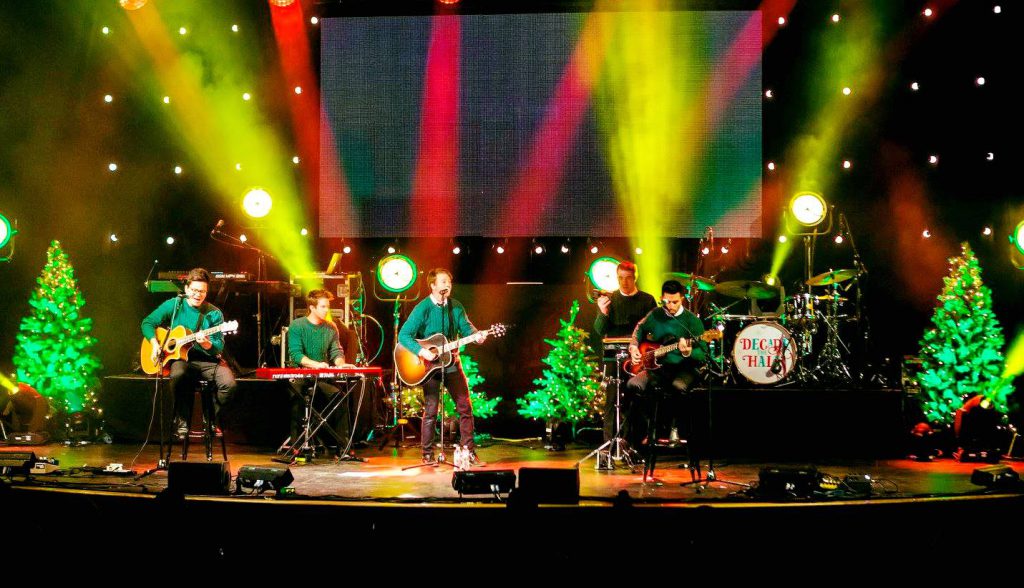