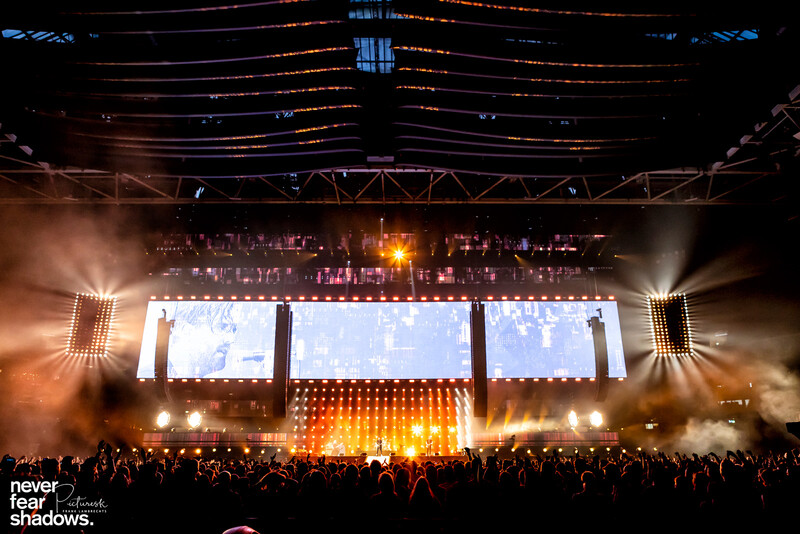 Creativity takes courage. These words, learned long ago, came to mind when we were talking to the founder of the aptly named “Never Fear Shadows.” In any endeavor, especially one as complex as lighting design, the process of calling forth new ideas is fraught with peril and uncertainty. Inspiration alone will never do. It must ride on the shoulders of brave determination, which explains why this Belgium-based designer concluded our interview by declaring, “if you want to know what drives my work, it’s that I never give up.”

This fearless tenacity in pursuit of his vision has made Milbou a most widely respected and in-demand broadcast lighting designer. Never hesitant to push the envelope, he has created designs that stand out for their remarkable use of dark space and geometric patterns, as well as their harmonious balance between production looks and the spot-on key lighting of performers.

In addition to his impressive body of broadcast work, which includes the 2019 European Commission’s Presidential Debate, Dancing With The Stars Belgium and Liefde voor Muziek, Milbou has lit an impressive list of live events. Speaking to us from his studio in Kalmthout, Belgium, Milbou shared insights into his determined approach to lighting design.

Your company has an intriguing name, Never Fear Shadows. Does this reflect your design philosophy, which makes such effective use of dark space in so many projects?
“Yes, for sure. I think a nice light is really only working when there is darkness to locate it in. Of course, there are exceptions, such as when you light a news set and you don’t want any shadows, but in general darkness brings out the best in a lighting design. I never believe in throwing as much flashy lights and colors out there as you can. Lighting works best when it’s in a context, and that context is darkness or shadows.” 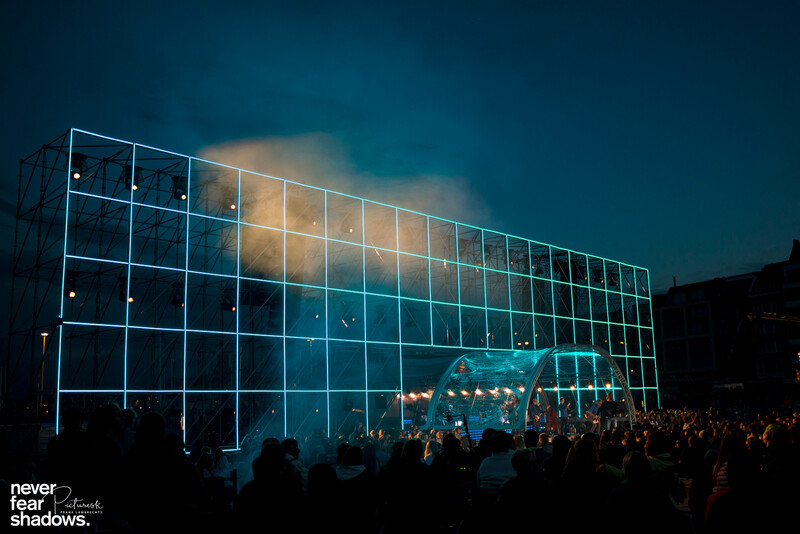 Since you are a ‘lighting’ designer, does it take a certain level of discipline to refrain from using too much light? After all, you have all these great lighting tools at your disposal, isn’t there a temptation to use as many as you can?
“True, there is that temptation, and there is discipline involved in maintaining balance. In many cases, there is too much brightness in my first rehearsals. As soon as the camera is brought in and I take a look at my work, I start asking myself, ‘do I really need this?’. When the answer is ‘no,’ I start throwing things off the rig to get the design down to where it should be.”

On the subject of shadows, we were very impressed with what you did during one song in the Rode Neuzendag Live Show 2019, when you had most of the stage black except for some columns of light accentuating the singer and pianist. Can you tell us about that look?
“It’s interesting. For most of that show we had a very happy atmosphere, but that one song was deeply moving and personal, so we wanted a dramatic accent. The sharp contrast between well-defined beams of stark white light and a sea of blackness is something that hits you with great force, especially when it’s contrasted with the general mood of the show. Variety and change are important elements of design.”

As a lighting designer, you have to collaborate with others, including set designers to make a project successful. What is the key to a good, productive collaboration between lighting and set designers?
“Appreciate each other and understand what the other person is trying to accomplish. There may be times when a set design won’t work with lighting. For example, the reflections created by the material in a scenic piece might make it impossible to light faces properly for the camera. When there is trust and mutual respect, the set designer will be more receptive to your advice in this type of case.” 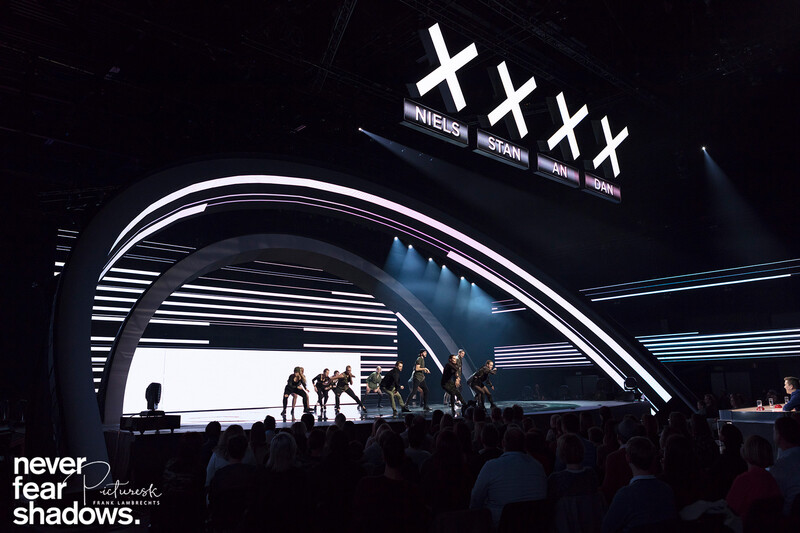 Speaking of lighting for the camera, how do you anticipate how your design is going to look once it is captured on video?
“To begin with, I train my eyes to see the world as a camera sees it. As good as cameras have become, and they’ve become very good, your eyes can see much more than they do. So, something that looks good to you, may not translate well on to the camera, which is why I design from the camera’s perspective.”

What else do you do to make your designs camera friendly?
“Measure, measure and measure! Before we bring the cameras in, I will spend a day taking light readings, so we have a good starting point once we start working with the cameras. Paying attention to detail before you start reduces the risk of surprises. Sometimes, I want to say to a producer, ‘rather than give me two extra lights,’ give me more time to do the proper measurements. Again, it’s not just putting more light on the subject, but how you use the light that matters most.”

Video walls have become much more prevalent on broadcast sets. How does that impact your work?
“I use video walls often, but I want to be able to control them. If someone else is asked to create content for a video wall, that’s fine, but I need to control the output and color balance. A video wall is a light, and that’s how it should be treated if you want to have a show lit correctly.”

What’s the first thing you do when you are given a new project?
“I spend time talking to the client, to find out as much as I can about the vision behind the project. My job as a lighting designer is to help bring that vision to life.”

How do you get inspired at the start of a project?
“Oh, that’s a tough one! Maybe I walk my dog, I don’t know. Sometimes at the start of a project, I may have no idea how we’re going to make things work. That’s pressure! Then one morning, I’ll wake up and everything is clear to me. The creative process is a funny thing – and of course, it works much better when there’s the pressure of a deadline!” 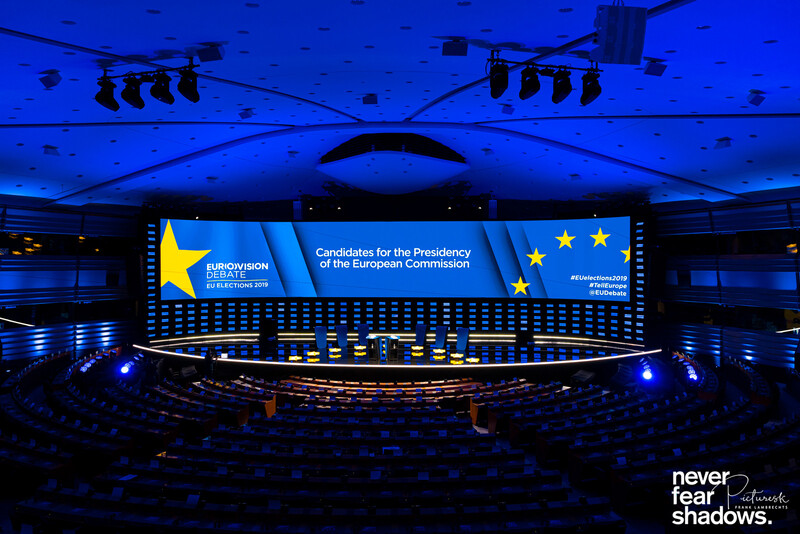 We’ve always been impressed with the work you do for Dancing With The Stars, especially how you balance creating an architecture of light for the dancers to move through, while still having a design that works well on camera. Can you tell us how you approach that show?
“Dancing With The Stars is one of my favorite projects. I like to think that one of my greatest strengths as a designer is my ability to balance different elements of a design, so you get the overall looks of the surroundings while still keeping the best possible lighting on faces, — and getting the light on face right is the most important thing you can do in broadcast lighting!

“In the case of Dancing With The Stars, there is a huge projection over the floor that tells the story of the program. You have to take that into account in your design, yet at the same time you must have to show the dancers themselves in the right light. I put a lot of time and energy into getting this right.

“The first time I lit Dancing With The Stars, I went to the vendor to tweak the output of the projector. I also studied different floor materials, so I could come with a combination that gave us the optimal reflection, one that didn’t create hotspots on the dancers.”

Do you follow the same approach to lighting when you work on concerts, festivals or other nonbroadcast applications?
“I always take the same approach, because the same rules apply. This is especially true today. Think about the last time you went to a concert and did not see cameras present. So, in one sense everything is broadcast lighting.”

How did you get started in lighting design?
“I went to film school with the intent of studying sound, but soon moved into lighting because I wanted to do something that involved creating an atmosphere. Lighting gives me this form of expression.”

A lot has happened in entertainment lighting since you made that move in film school. New technologies have greatly expanded the lighting designer’s creative options. Has this changed the way producers and other people involved in a show view your role as a lighting designer?
“Yes, there has been a huge change in this regard. Earlier in my career, when I would go into a production meeting, it would be like ‘Here is the set! We have been working on this with the production designer for months, now go out and turn on the lights.’

“Now it’s almost the opposite. As a lighting designer I’m one of the first called into the production meetings, and it’s like ‘We don’t want to see any scenic pieces here just the lights.’”

Lighting design is really a blend of creativity and technology. How would you describe the relationship between the two?
“It is, as you say, a blend. Technology is a great tool for helping you express your creative ideas. It can also be a source of new ideas, such as when you see a new type of fixture and it inspires you to try something different. But technology also has to be put in its proper place. It’s not something you use just because it’s there. I don’t like shows where you get the feeling the designer is saying, ‘look poppa at what I can do with these new toys!’ New technologies are only good when they help the lighting design advance the story that the client is trying to tell.”

Moving away from technology, what is the most important personality trait that you possess that contributes to your success as a lighting designer?
“Interesting question! How to define that trait? I would say it’s that I never see anything as a ‘no.’ Whatever the client throws at me, I work to find a solution. My mission is to make what is happening on the stage stronger, so it’s not for me to say no to the producer or director’s new idea. If you want to know about what drives my work, it’s that I never give up.”