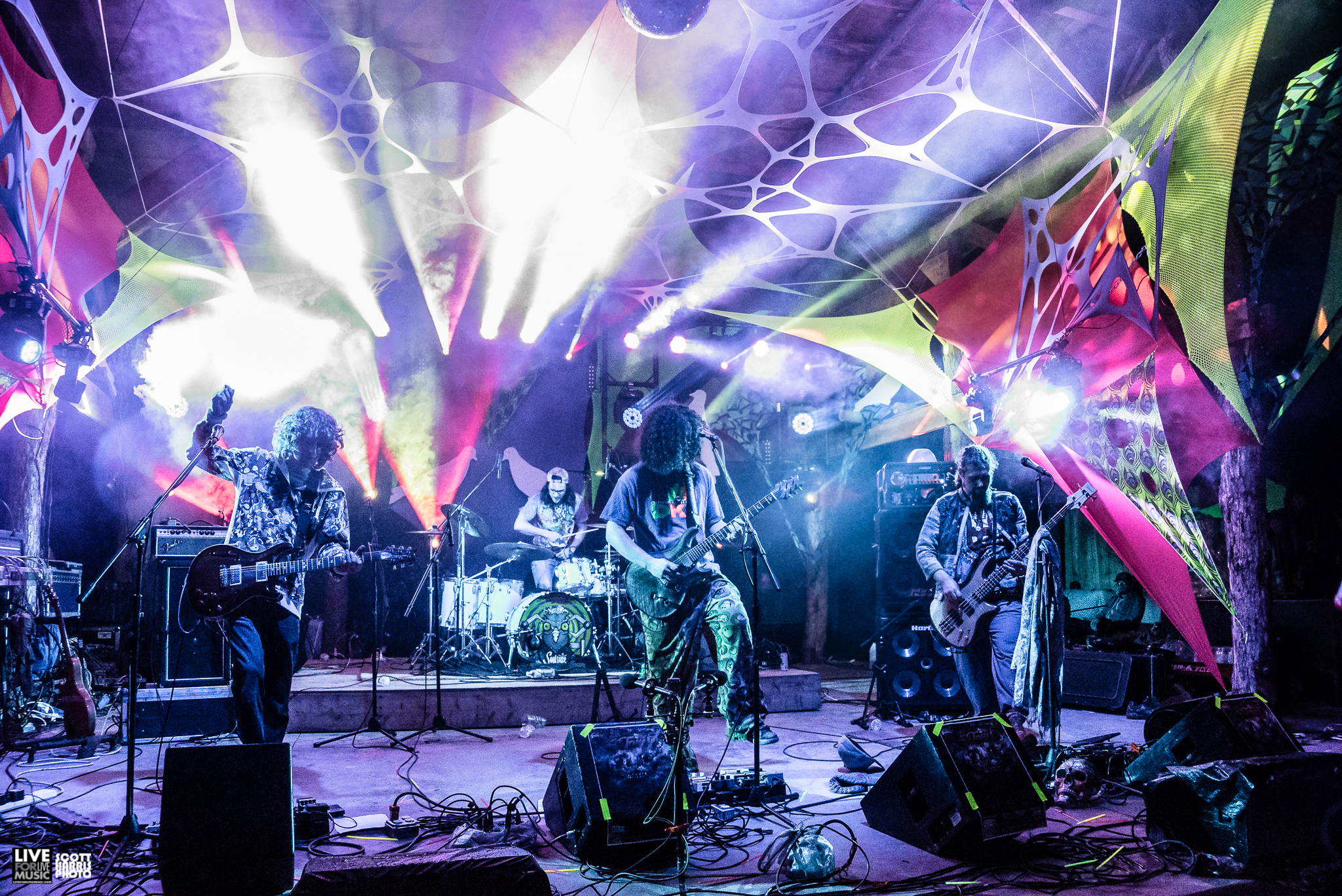 BEDFORD, PA – Jam bands expect their lighting designers to be ready to punt at the drop of a hat and come up with a fresh look for a new guitar riff that just pops up in the middle of a set. At the recent Domefest, however, funk rockers Pigeons Playing Ping Pong asked their LD Manny Newman to go a step (make that many steps!) further. The popular group, which started the annual three-day jam festival in 2010, wanted Manny to create a flexible punt-ready lightshow for an eclectic mix of over 20 bands.

Manny and lighting tech Danny Katz met this challenge with a lightshow that seemed to unfold effortlessly over an extended weekend of jam and funk music, serving up ever more opulent, colorful and free flowing looks. A big help in accomplishing this feat was provided by a powerful and flexible rig that featured a collection of Rogue fixtures from CHAUVET Professional, supplied by 4Wall Entertainment.

“This project was a fun challenge, the kind that you crave as a lighting designer,” said Manny. “Domefest had three theme nights. Thursday was ‘Moonwalk: A Trip Through Space,’ Friday was ‘The Liquid: An Ocean Adventure,’ and Saturday was ‘Melting Lights: A Color Explosion.’ Each night had a different flavor, which we wanted to reflect visually. At the same time we wanted to be flexible enough to go in whatever direction the music took us.”

Manny had 14 Rogue R1 Spots and eight Rogue R1 Washes in his rig. The Rogue fixtures were instrumental in providing the flexibility needed to reflect the changing mood on stage from night to night. “I depended on the Rogues to help me create the unique looks every night for every theme,” he said. “With the removable gobos on the R1 Spots, I was able to create a lot of cool scenes with two of my favorite gobos: the ‘cone’ and the ‘sonar.’ I used the split colors for a couple of unique looks. I really like the CTO/Cyan split color. Also, the prism is fast on the Rogues. It really helps me do smooth prism effects and wipes.”

For control, Manny ran a grandMA2 on a PC. “This is what I always use on tour with Pigeons Playing Ping Pong,” he said. “The grandMA2 really allows me to use the rig the way I need to. With Pigeons’ extensive live improvisation and a different set list every night, I really need to have every cue ready to punt without hesitation.”

The Main Stage rig at Domefest was outfitted with six Rogue R1 Spots on overhead truss and four additional units on the upstage deck, plus four more of the Rogue Spots on road cases. For washing, Manny used eight Rogue R1 Washes, half of them for side washing and half for the downstage. He also used a collection of blinders and beams.

“I designed this stage specifically for Domefest, which is Pigeons Playing Ping Pong’s own festival they put on every year,” said Manny. “I had to make sure the main stage looked good in the day and night. It was also very important that we create this very rich deep colored look with a lot of texture and movement to convey the psychedelic feeling of the show.

“The fixtures were positioned in a way that shows three circles and with the R1 Spots in blind position; it creates sort of a smiley face, which was a nice touch,” he continued. “I used the R1 Washes for my front and side wash because they have the 11° to 48° zoom, they are very quick, and the ‘bubble’ lenses are really easy on the eyes.”

Coming up with opulent looks for multiple bands with diverse styles over a three-day period was not without its trying moments, but the creative rewards made it well worth the effort, believes Manny. In fact, the only really tough part of this project was taking everything down when the festival was over – and even that was mitigated by a fortunate circumstance.

“Our biggest challenge was tearing it all down,” he said. “Fortunately for us, the band ‘Aqueous’ was jamming outside all night after the festival ended. They played until the sun came up, and that definitely made tear down more groovy for us.”