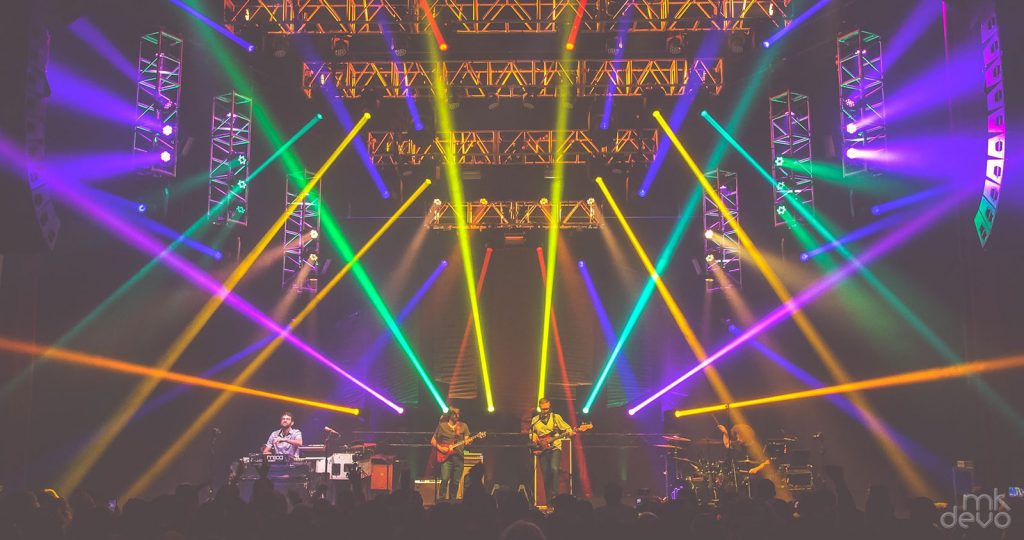 On Saturday, April 27, Dopapod ended a year long hiatus with a show at the iconic Capitol Theatre outside New York City. Fans of the progressive jam band weren’t disappointed, as they unleashed a new song that they conjured up in their year away from touring.

The Capitol Theatre show also represented a new creative venture for Luke Stratton, the band’s longtime lighting designer and audio engineer. Stratton, who has been with Dopapod for 10 years, journeying with them from working small clubs to playing before 30,000 people at festivals, was a committed “lighting guy,” determined not to mix video into his shows. That all changed though during his clients’ hiatus when he worked as the lighting director on the video-rich Smashing Pumpkins shows.

Through this experience, and his contacts with other LDs who ran multimedia designs, Stratton decided to use the Capitol Theatre appearance as an opportunity to introduce video into his own show.

We were impressed with the quality of this touring LD’s first foray into video. His experience, we believed, could hold valuable lessons for other designer/directors who were looking at expanding their creative horizons with video. With this in mind, we caught up with Stratton to talk about his video experience. 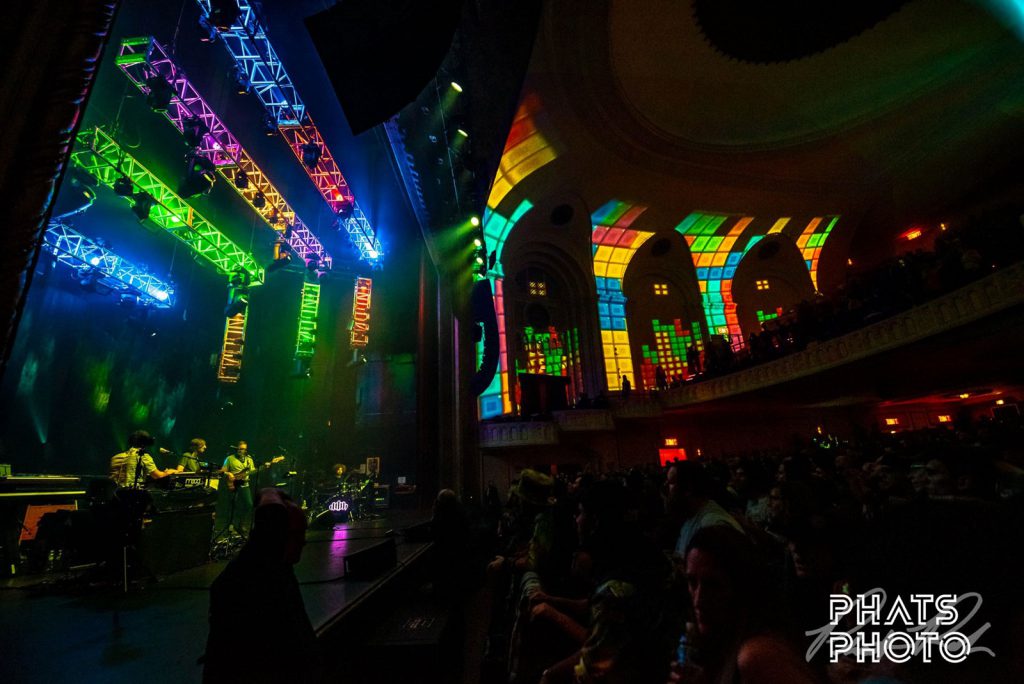 Before this gig at the Capitol Theatre, had you ever used video in your shows?
“I’d never used video on a Dopapod show before. Historically, I’d always been pretty opposed to the idea. I don’t usually favor shows where the designers are telling me what to think, or even worse, when I feel like I’m watching a big TV. But I started to see some cool stuff by LDs like Andi Watson with Radiohead and Greg Ellis with Pretty Lights. They’ve both done things that are more like using video as light rather than filmed content. Then the guy who really put me over the top on using video for live shows was Sachem Arvidson with The Flaming Lips. I was working a festival that they played at, and he blew me away so much that I interviewed him for my own podcast, The Light Side. After that, I was hooked.”

Once you were hooked, what made you decide to incorporate video into this particular show at the Capitol Theatre?
“So, Dopapod took 2018 off, and through a cool chain of events that actually stemmed from my podcast, I ended up as the Lighting Director for the Smashing Pumpkins. Their arena tour that year had a ton of video content, so I had a crash course in programming video. On the arena and subsequent fall theater tour we fired playback and effects on the video from the lighting console, so I really got a handle on how it all pieced together.

“Between my experience on Smashing Pumpkins and the inspiration from Sachem and the Flaming Lips, I was ready to give my own video a try. When Dopapod ended their hiatus, we picked the Capitol Theatre for the comeback show. As it turns out, the Cap has an awesome projection system built into the venue. The walls and the proscenium and dome are all projection mapped. Having been there with The Motet the year prior, I knew we just had to use the system. However, I also knew I didn’t want to use the venue’s stock content.”

How would the Cap show have been different if you didn’t have video?
“At that venue the projection mapping is so immersive that not using it would be a bit of a letdown. That being said, I used it only about 20% of the time. I wanted to keep it special, and not have it as an ‘always on’ element. That’s one thing that bothers me about tours that have a live lighting guy and a live video guy — and maybe a live laser guy, they all want to get their time in. When that happens it just gets cluttered, and lacks composition. That’s not the case when one creative director controls all the elements.”

What were the biggest challenges you faced doing this?
“Well, on that show I was the LD, the VJ, and the FOH audio engineer, so there was a lot on my plate! But I loved the challenge. I had to learn a new piece of software, and essentially develop a new eye and skillset to pull it off, but it was a fun challenge.”

Any mistakes made that taught you a lesson?
“I learned a lot about what works and what doesn’t. I’m still working on what I ‘want,’ as far as content. It’s time consuming and I’m such a perfectionist, so making my own content is like going into a deep rabbit hole that leads to a time feedback loop. At one point, I was like ‘I need to learn how to 3D animate. I need to learn old school oil light shows and film them. I need to start filming content!’ However, I had to check myself and do what was actually possible. Learning a new program like Cinema 4D is something I would love to do someday, but right now there’s just not enough time in the day. Plus, I have to make time for my weekly Dungeons and Dragons game when I’m home. Yes, I’m a huge nerd.”

You had a lot of intense beam looks at this show. How did you keep them from overpowering the video or vice versa?
“Oh, I’m all about the beams. Like I said, being in charge of both aspects lets you decide which element is ‘in the spotlight.’ Dopapod is 100% punted live, so I can bring elements in and out as needed. If a piece of video content is particularly dark or interesting, I can throttle the dimmers to make the video pop, or go to a darker color, or wider gobo. At the Cap the projectors aren’t bright enough to overtake beam looks, but I had all my masters on faders just in case.”

Will the experience of using video this way change the way you view lights in future designs?
“I’m excited to use video more, hopefully on a project that has the resources – be it time or money – to finance some discovery and concept exploration. I think there is a way to make the two elements sing in harmony without throwing off the LD part of my brain.”

Do you see video being a part of every show of yours going forward, or are there shows where video wouldn’t work for you?
“I’ll always be a lighting guy first, since that’s what I love to see. But the two are becoming more and more integrated, especially with all the pixel fixtures coming out. I’m excited to dive deeper. But this year’s Pumpkins tour, for example, has no video, and I’m loving it!”