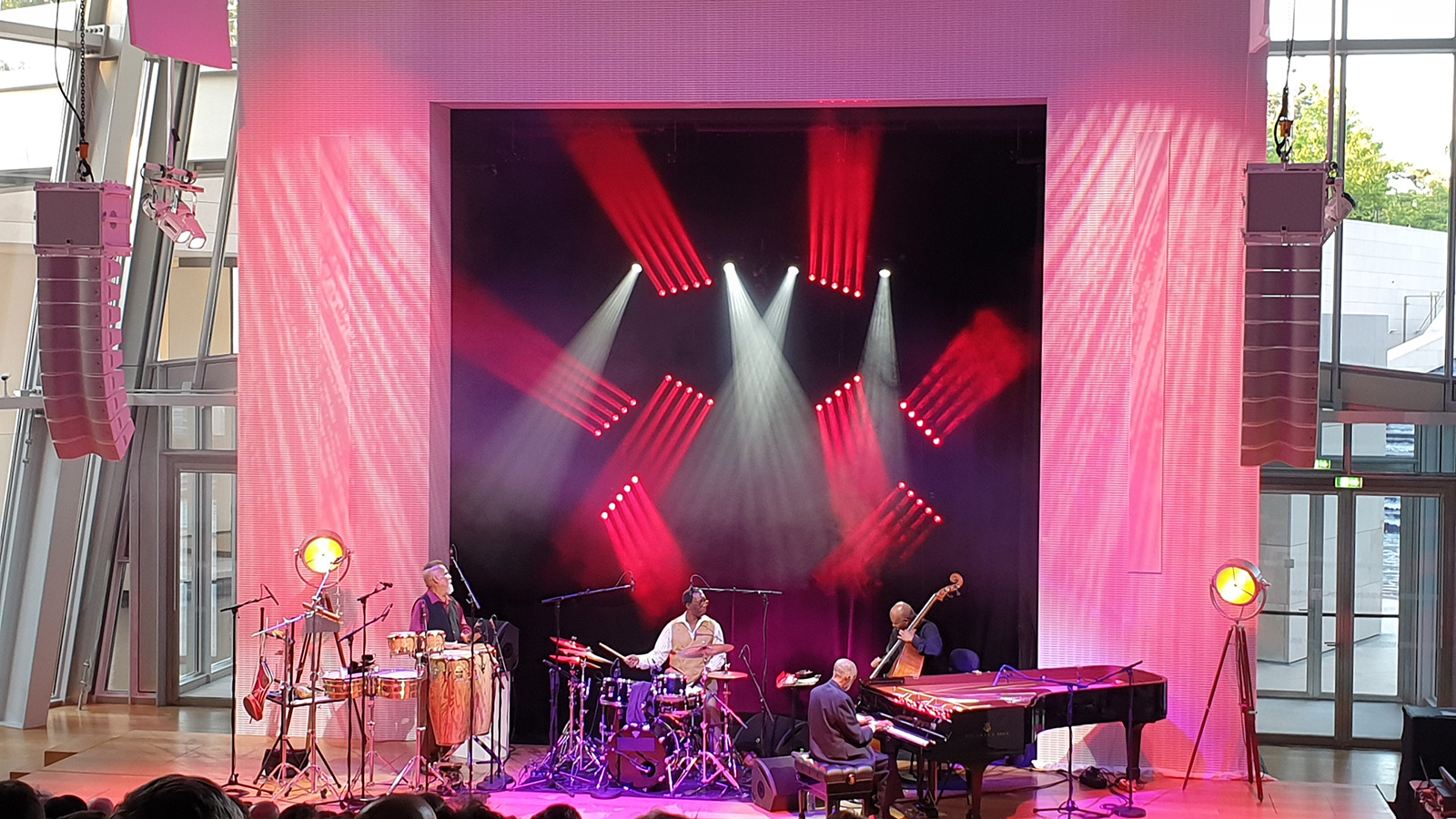 Their births separated by a little over a year and 500 kilometers, Ahmad Jamal and Frank Gehry seem to have followed the same creative star over the course of their long, fertile lives. Jamal, who came into this world on July 2, 1930 in Pittsburgh, learned to play the piano at three, and became a definitive force in jazz. Gehry, born 16 months earlier in Toronto, would become a world-renowned architect.

Although both men flourished in different fields, they were guided by the same vision: to create works that boldly defied convention to liberate the human spirit. The visionary force of these two inspired artists crossed paths in Paris on July 4, when at age 88, the Grammy Award winning Jamal performed the world premiere of his new album Ballades at La Fondation Louis Vuitton, one of Gehry’s most soaring and inspired architectural designs. Enhancing the dramatic impact of the moment was an uplifting lighting display by Puzzle SA that featured eight CHAUVET Professional Rogue R1 FX-B fixtures.

Arranged in an oval-like pattern behind center stage, their independently controlled moving heads pointing in multiple directions, the Rogue fixtures created beguiling geometric patterns that not only reflected Jamal’s music, but also harmonized beautifully with the large angular glass sails that define the character of this famous museum/concert venue.

Seemingly pointing in every direction at once as they reach for the sky, the building’s 12 glass sails work with its other features like the prismatic yellow columns by Danish artist Olafur Eliasson and the waterfall next to the auditorium, which is also highlighted.
His design flows naturally with Ahmad Jamal’s music, which casts off the shackles of conventional phrasing and timing to reveal the essence of jazz. 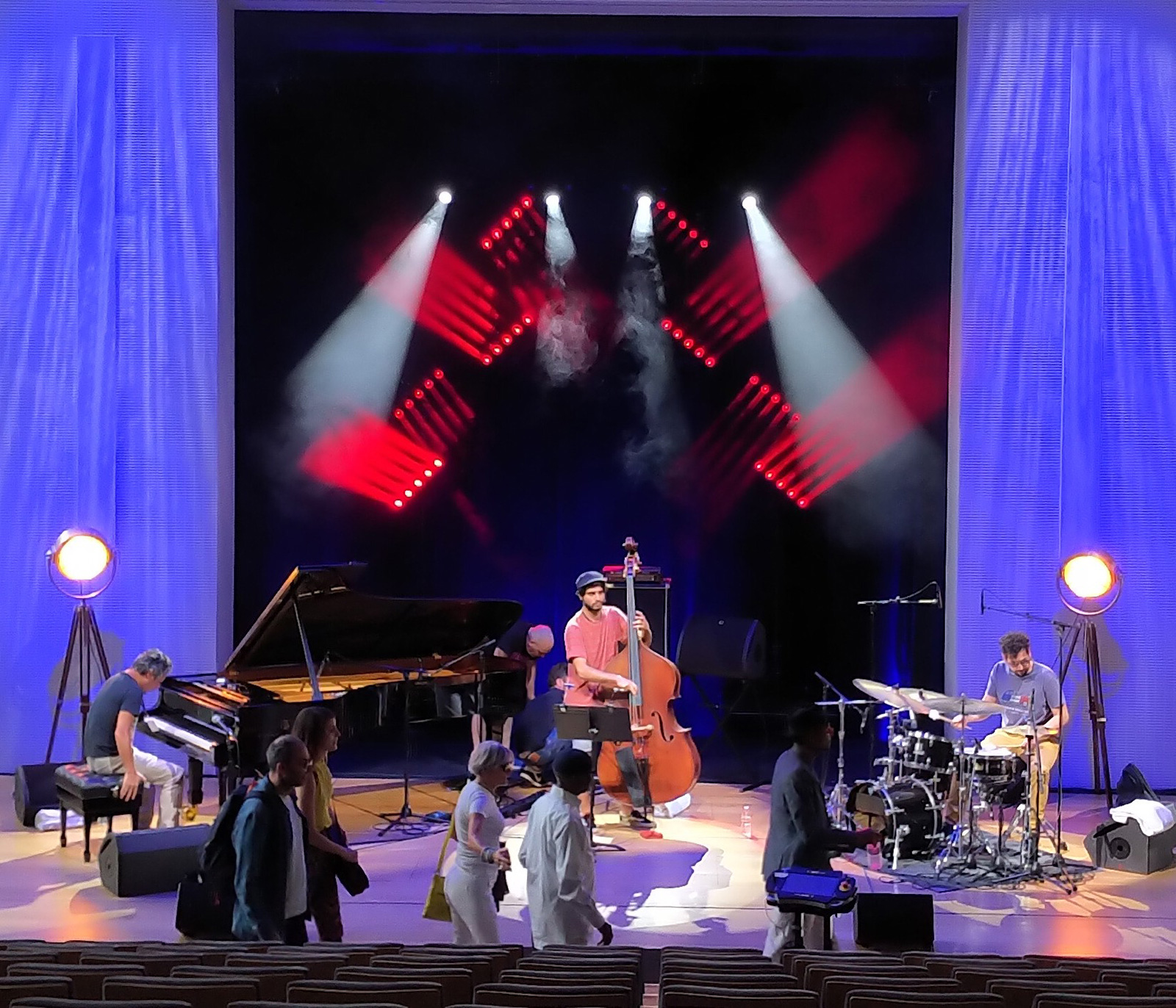 Completing this liberation of the spirit are the Rogue R1 FX-B fixtures, which create myriad patterns in the background as they reflect the music.

“Among the most interesting parts of this project was how the Rogue R1 FX-B enhanced the performance of the musicians,” said Bruno Madec, Technical Director of the Puzzle SA. “The lighting provided support for the musicians, creating a lively atmosphere to best reflect their work. The jazzmen are without a score, the support of the Rogues with the tables helps them to nuance their musical notes.”

In addition to supporting the musicians, the Rogue fixtures created an engaging panorama that held the interest of the audience by changing during the concert. Switching the colors they created with the RGBA linear fixtures, while also changing coverage areas and the direction of the moving heads, the Puzzle team varied the looks of the backdrop without distracting from the performance of Jamal and his band.

However, the concert was not without its challenges for Puzzle. “It started in the early evening, and since we are in the middle of the summer season, it was not easy to place the Rogues in the black hangers and put the spotlights on at the same time as the sunset,” said Madec. “Creating bright pictures according to sunset and with video capture at the same time was difficult, but we did it.”

Bruno Madec credits the Puzzle team with making the show a success. This includes General Stage Manager Aurelien Guedj; Sound Engineer Rodolphe Mertens; Light Desk Operator Stéphane Mocret; Lighting Technician Antoine Jugman; and Video Director Christophe Bellemain; as well as Stage Managers Michel Daladouire and Bob Hedger.
Like a good band, the Puzzle team performed seamlessly together to achieve a design that served as a bridge between the inspired work of two visionaries. In the process, they helped to create magic on this warm summer night.