KINGSTON, JAMACIA – In Jamaica, a common cheer at events, especially concerts, are shouts of “Lighta, Lighta” accompanied by an enthusiastic audience member or two blasting an open flame towards the night sky in support of performances. Before the pandemic brought large public gatherings to a halt, Tech Diva Ja, provided such a moment for “Our Heroes: Walking in their Light” by illuminating the works of original sculptors and artists in vivid colors with help from CHAUVET Professional WELL Fit fixtures supplied by Phase 3 Productions.

An all-female design collective led by Nadia Roxburgh, Tech Diva Ja is made up of technical artists, engineers, choreographers, lighting designers and production managers. Also working alongside the Tech Diva Ja team at the event, which was held in Kingston’s National Heroes Park, were industry pioneers, Rufus McDonald and the late Franklyn ‘Chappie’ St. Juste

This project, which paid tribute to Jamaica’s National Heroes, continued Tech Diva Ja’s work that previously reimagined Kingston’s public art spaces at night. Located around the nation’s capital, these spaces include popular statues like Negro Aroused by Edna Manley and Evolution by Chung Knight and Raymond Watson, among others. They serve as both canvas and inspiration for the colorful lighting work done by the team. 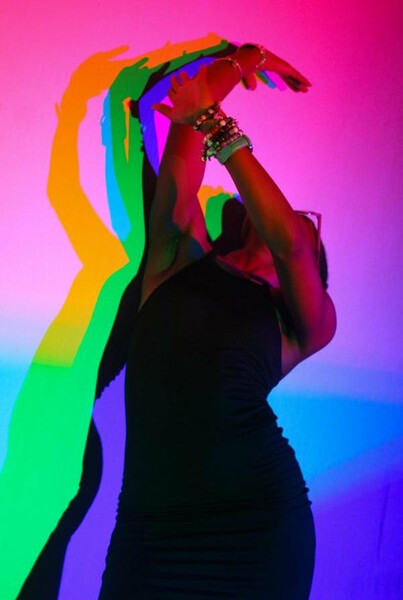 Using predominantly battery-operated lighting by CHAUVET Professional from Phase 3 Productions Limited, the monuments were individually lit, completely transforming the space and giving a whole new interpretation to the presentation of the heroes.

With different lighting designers working on each monument, each presentation evoked a different feeling specific to the hero being reflected. The Right Excellent Marcus Garvey, Jamaica’s first National Hero, known internationally for his philosophies and teachings, was uplit using red and green, the colors of the United Negro Improvement Association, which he founded in 1914. For devoted Gaveyites and many Jamaicans, the lighting design by Taryn Bridgewater would have evoked feelings of nationalism and pride at Garvey’s global legacy.

The monument dedicated to the Right Excellent Samuel Sharpe, lit by Nadia Roxburgh, featured prominent shadow play placement of the year 1831 and 1865, representative of the 1831 Christmas Day Slave Rebellion led by Sharpe and the 1865 Morant Bay Rebellion led by the Right Excellent Paul Bogle. Famous for the words, “I would rather die upon yonder gallows than live in slavery”, Sharpe was hanged the following year and was conferred with the Order of National Hero in 1982, a century and a half later.

The lighting that adorned the joint monument dedicated to the Right Excellent Paul Bogle and the Right Excellent George William Gordon, was lit by Chappie St. Juste, long-time friend and mentor to the Tech Diva Ja team. Chappie, a Trinidad-born naturalized Jamaican, has had his influence reach almost every aspect of independent Jamaica’s entertainment industry, from the documentation of Jamaica’s 1962 Independence celebrations, to his work in Film and theatre across the Caribbean.

At the arch shaped monument honoring the memory of the Right Excellent Alexander Bustamante a crowd-pleasing lighting display that combined with the creative use of color and interactive shadow play allowed visitors to become part of the work. Lit by Jessica Shaw, the flexibility of the wireless WELL Fit units meant that the lights could be discreetly placed and on-the-spot adjustments were easy to execute, resulting in a dynamic presentation of Bustamante’s monument.

Designer Aisha Robinson used lights at the Right Excellent Nanny of the Maroons monument to illuminate the abeng. Designed by Aisha Robinson, the WELL Fit units allowed the abeng to be lit in such a way that the traditional horn appeared magically illuminated from within. This provided a fitting tribute to the only female Jamaican National Hero, who herself was thought to possess supernatural powers.

Working with the British Council, Tech Diva Ja was able to pay it forward by hosting a workshop with ‘Backstage to the Future’ (a live events and performing arts skills training program focused on youth) and incorporating them in the project. These young technical arts trainees were led by Michael ‘Rufus’ McDonald and Careen Walton in the lighting design for the monument for the Right Excellent Norman Manley.

For Roxburgh, the driving force behind the conception of this event, seeing it through from start to finish was a proud moment. “What really made this display special for me was the experience of seeing my research in a very real and tangible way. I’m exploring the concept of how lighting can be used to transform spaces, and people as they inhabit these spaces, so being able to execute at National Heroes Park, was not only important to me as a Jamaican, but also because you could see how people were affected by the presentation of our heroes in a new light.

“In addition to the Hon. Olivia ‘Babsy’ Grange, MP, CD, Minister of Culture, Gender, Entertainment and Sport and the Hon. Floyd Green, MP, State Minister in the Ministry of Industry, Commerce, Agriculture and Fisheries, we were able to bring out many first-time visitors to the park and for some visitors,” continued Roxburgh. “This was especially moving at the monuments dedicated to Marcus Garvey and Nanny of the Maroons, it became an almost spiritual experience.”

The event “Our Heroes: Walking in their Light” would not have been possible, said Roxburgh without the support of sponsors and partners such as the British Council; the Ministry of Culture, Gender, Entertainment and Sport; the Jamaica Cultural Development Commission; Phase 3 Productions; Philip Sherlock Centre for the Creative Arts; Conceptual Lighting & Audio Services; Starlight Production and iPrint Digital Limited.

Although that is undoubtably true, also indispensable to this inspiring project was the vision and creative drive of this group of talented women.