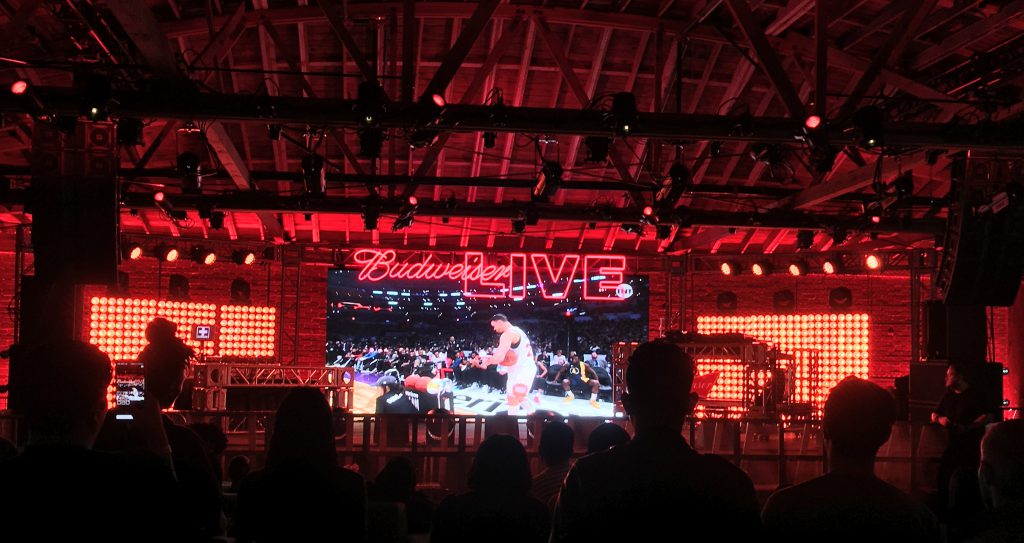 LOS ANGELES – When Justin Preston was called upon to provide lighting for Budweiser Live during NBA All-Star Weekend, it really represented two projects in one. The brewing giant’s pop-up entertainment center for the big game was the first event ever hosted at City Market Social House, a restored 16,000 sq. ft. industrial space opened in the Fashion District of downtown Los Angeles. Preston not only put together the ground package for the weekend extravaganza, he also created the permanent lighting system for the new event facility, loading in both rigs simultaneously in advance of the NBA’s big weekend.

Meshing his own permanent design for the venue with a carefully chosen ground package for the event, Preston created a dazzling display for the NBA All-Star Weekend festivities, using over 400 CHAUVET Professional fixtures. “I was super excited when VOX Productions, the AV provider for Budweiser Live, asked us to do the lighting for the event,” he said. “We’ve worked with VOX in the past, and it’s always been a great experience. Being able to light this event and build on our own house rig at City Market Social House made this project even more special.”

Even fans who weren’t focused on slam dunks and three-point plays found plenty to cheer about at Budweiser Live, a gleeful amalgamation of world food, music from stars like T-Pain and A Boogie, celebrity appearances, beer tastings and a host of interactive games. There was even a tailor shop on site, courtesy of Levi Strauss, offering custom-curated apparel. Preston’s mission was to tie all the various activities together with a cohesive lighting design that pumped up the excitement level, while still making visitors feel welcomed and relaxed.

“City Market Social House is a versatile event space,” said Preston. “This is what we kept in mind when designing its lighting system. We wanted to be able to evoke an impeccable club vibe when necessary, while also being able to cater to marketing and special events. This concept is at the heart of our permanent rig. For the Budweiser event we wanted to enhance the excitement of the weekend, with some unique looks. Our permanent and temporary rigs worked in tandem to achieve these goals.”

Pulling divergent elements of the multi-faceted Budweiser Live event together, Preston was able to create a harmonious design throughout the sprawling event. He even managed to merge two lighting consoles together through CHAUVET Professional Net-X and NET-Switch.

“The LD for one of the performers, T-Pain, wanted a console that was different from the one we were using for the event,” said Preston. “Happily, we were able to merge sCAN signals from both boards through Net-X and NET- Switch, so everything ran seamlessly.”

Arranged on the stage deck, the Rogue R2 Spot fixtures provided aerial lighting for the musical performances that ran throughout the weekend. “The music was obviously very important to the overall experience at Budweiser Live,” said Preston. “We wanted to create a concert vibe on the stage without distracting from the experience at the rest of the center. Also, we had to be aware of our relatively short setup time. The compact and tightly focused Rogues were ideal for our purposes.”

Adding to the excitement onstage were the Nexus panels that Preston set up on three towers, stage left and right and used for washing and special effects. He also positioned R2 Beams on top of the Nexus towers, creating a powerful concert-like impression. To complete the look, he arranged his Rogue R2 Wash units on stage left and stage right arches, using them for side and back lighting. 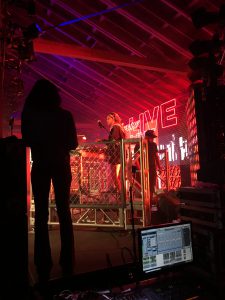 The Ovation F-95WW Fresnel fixtures in the City Market Social House’s permanent rig filled a variety of roles for Preston during the All-Star Weekend festivities, serving as house lights, audience blinders and strobes. “The Fresnels really exceeded my expectations,” he said. “Not only do they give a truly natural and even wash of the space as house lighting, they also worked very well as strobes for the heavier musical acts.”

In addition to crediting his well-chosen package of fixtures for the successful event, Preston singles out the efforts of his creative team. “Mark Rodriguez, who was the Production Manager of the event, was an amazing collaborator and instrumental to the execution of the All-Star event,” he said. “My thanks to VOX Productions and City Market Social House partner Shawn Sedlacek for trusting me with such an important installation. Also, given the tight turnaround of the install of the permanent and temporary lighting, having a good ALD was vital, and Ryan Tirrell handled the job perfectly.”

For Preston, the success of this permanent City Market Social House rig during its first event represented hope for the future. “I know there are big plans for this venue,” he said. “It’s going to host a variety of events. Based on how our permanent rig handled things during this high-profile weekend, there’s no end to the looks I believe it can create in the future, especially when it teams up with a good ground package.”