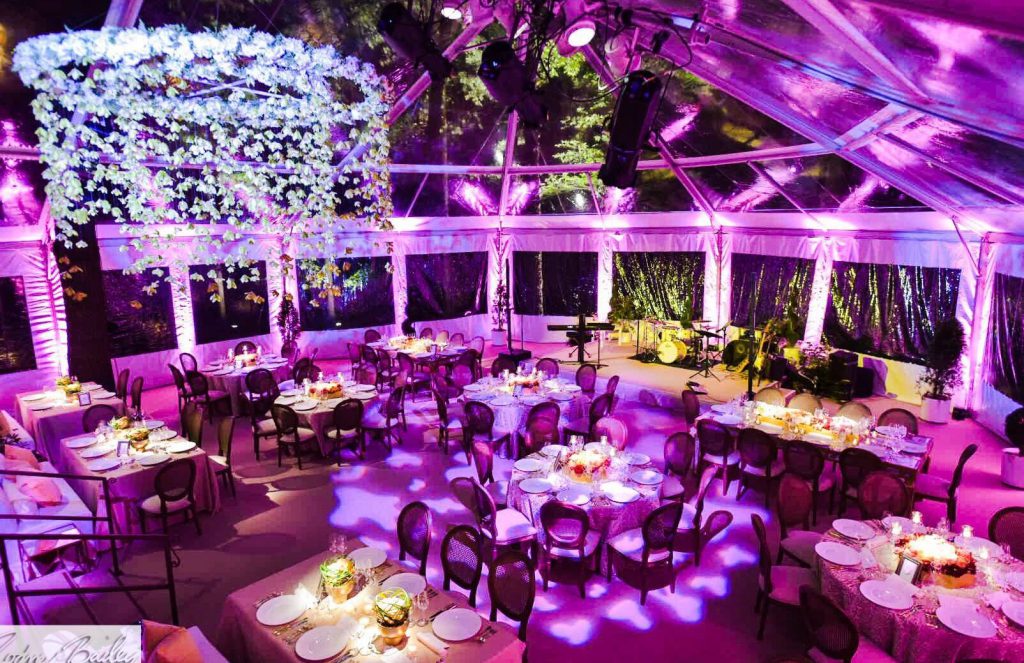 BALTIMORE, MD – As a leading event lighting designer in the Washington DC area, John Farr has seen more than his share of spectacular celebrations. However, even he was surprised at a recent 50th wedding anniversary celebration in a home outside Baltimore, when TV Hall of Famer and former Tonight Show host Jay Leno made a surprise appearance to provide entertainment. Farr’s event rig, which consisted of 16 Ovation E-910FC ellipsoidals and 24 WELL Fit uplighting fixtures from CHAUVET Professional, as well a collection of pin spots, was more than ready to light the legendary comic.

“We created a nice look by using a lot of blues when Jay Leno appeared,” said Farr, the owner of John Farr Lighting Design. “The Ovation ellipsoidals create some deep rich blues, which gave the area an intimate feeling to draw everyone in closer to the surprise guest on the small stage.”

The “area” Farr refers to was the space inside a spacious vaulted-top tent that was set up behind the host couple’s home.  Farr flew the Ovation fixtures from the tent’s pipes, positioning them in the center and at the corners. 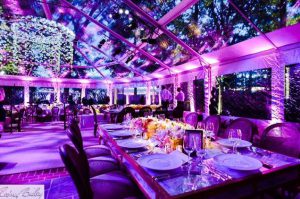 “Our client, Feats, Inc. out of Baltimore, created some very attractive scenic elements in the tent, and we used the Ovations to accent these points,” he said. “There was a very stunning chandelier and we illuminated that to great effect. We also used the Ovations for stage washing, as well as for overall room washing to provide colorful ambient light.”

Farr and his lighting lead/board operator Kurt Kruse positioned the 24 WELL Fits in their rig along the ribs of the tent and at the tent seams, as well as under some of the trees on the grounds.  Controlled by wireless DMX, the battery-powered uplights added a sense of elegance to the celebration.

“The WELLs really accented areas and created a very engaging look throughout the party,” said Farr. “They were quick and easy to set up and outdoor rated, which was very helpful because it was raining when we put the rig together. “

Farr also appreciated that the WELL Fits were battery powered.  Together with the low power consumption of the LED Ovation ellipsoidals, this made it much easier to work within the power constraints of the residential venue. “Power was a concern as this was a private residence,” he said. “The total power draw on the house was two 20 amp circuits. So the energy efficiency of our fixtures was very important.”

Controlling his fixtures with a Zero 88 console, Farr ran his rig to produce subtly elegant colors, primarily purples mixed with whites. When Jay Leno came on, however, he switched to the more theatrical blues. “Our fixtures gave us the versatility we needed,” he said. “We were able to move from event lighting to create more of an entertainment look for an iconic star, so our system really did a complete job.”