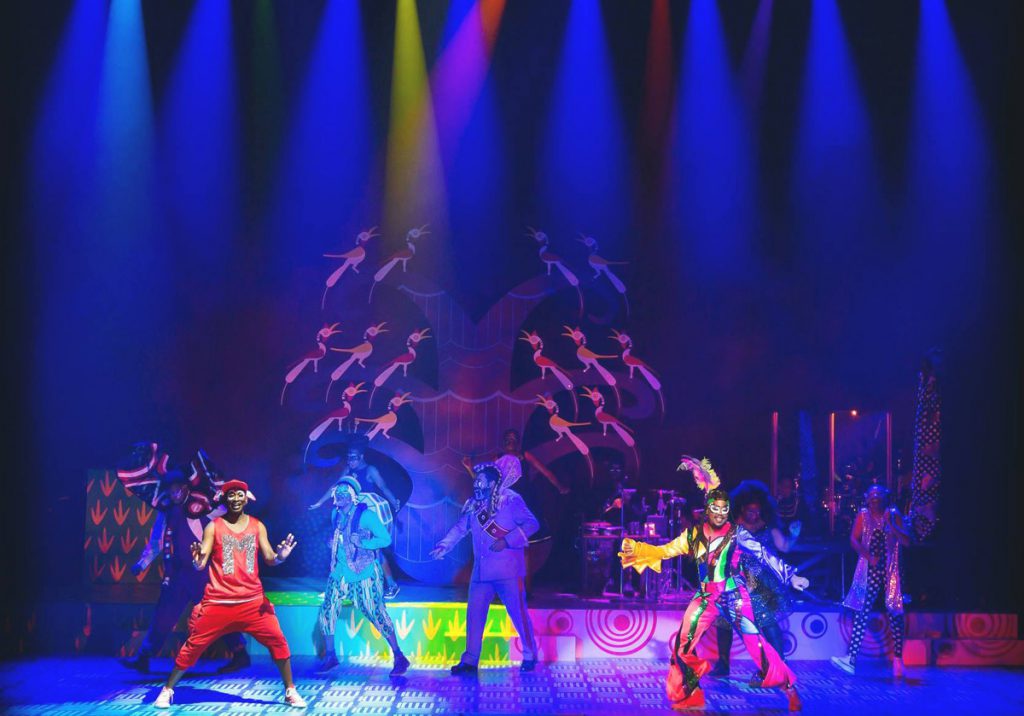 NEW YORK – Why do chameleons change colors? Technically it has something to do with things called nanocrystals in their cell structure. But a more wondrous and soul-stirring explanation can be found in one of the many African fables that come vividly to life in Tinga Tinga Tales – The Musical. A scene in the Kenyan children’s musical recounts a time when the chameleon was a dull, gray and sad creature. That was until it met a butterfly who led it to a very special rainbow. Stepping onto the rainbow, the chameleon instantly metamorphized into a magnificently colored animal resplendent in reds, yellows, oranges, pinks and greens.

Accenting this magical transformation at the North American premiere of the show in October were seven CHAUVET Professional Maverick MK2 Spot fixtures. These lights, along with 13 Maverick MK2 Wash units and eight COLORado 2-Quad Zooms, supplied by WorldStage, were part of a Herrick Goldman lighting design for the show at Manhattan’s New Victory Theater.

“The MK2 Spots provided the strong beams of the chromatic rainbow when the children in the audience discover how the Chameleon character gets his colors,” said Goldman, who positioned the 440W moving LED fixtures on the second electric. “They enabled us to shift Chameleon’s moods rapidly, which helped tell his magical tale. The MK2 Spots also played heavily in Tortoise’s Rasta rap, with a call and response with the audience. Overall, the spots help highlight performers in a variety of dramatic ways.”

Goldman was familiar with lighting the performers at the New Victory production of the musical, having worked the world premiere of the musical (which is based on the famous children’s cartoon series of the same name), when it made its world debut at the Kenya National Theatre in Nairobi earlier in the fall.

“My friends at the New Victory Theater recommended me to the producer of Tinga Tinga Tales for the show in Kenya,” said Goldman. “Based on my previous relationships and work at the New Victory Theater, as well as my international design experience, they thought I would be a good fit. So, I had the extreme pleasure of designing for Tinga Tinga Tales on two very diverse continents.

“We wanted to keep the same energy and vibe we had in Nairobi once we got to New York,” continued Goldman. “The New Victory staff really helped us go above and beyond. We had a great crew. My associate Jacquelyn Cox was instrumental in translating the cues and looks from one venue to another, and Jay Penfield, our programmer, was able to immediately translate a look from a video into the new rig and a different console. The pace and schedule at the New Victory was about half the time we had in Kenya, but it all came together beautifully.”

Featuring a cast dressed in splendidly colorful costumes that evoked images of lions, hippos, elephants and an array of other animals, Tinga Tinga Tales wove a tapestry of legends about the natural world that explained things like how the giraffe got such a long neck and why snakes have no legs. A captivating blend of rock, hip-hop, gospel and other music infused the production with energy, while the set’s richly colored scenic backdrops stirred young imaginations.

Goldman’s lighting helped transport audiences every step of the way on this enchanted journey. The five Maverick MK2 Wash fixtures he positioned on the balcony rail provided a beautifully saturated color wash from a low angle that accented the costumes and embellished the scenery and mood from the front. An additional eight Maverick MK2 Wash units on the third electric were used to light the band and wash the scrim, as well as for backlighting and audience washing. The Colorado 2-Quad Zoom fixtures in the rig were used to highlight the Tinga Tree upstage.

“The Maverick Wash fixtures did a great job from a low front angle to really punch up the colors,” said Goldman. “They also reflected off of the honey bee plexi mylar curtain and made fun golden reflections throughout the theater. The COLORados helped me establish mood and time of day as we shifted tonality.”

A good part of the magic of Tinga Tinga Tales came from the show’s genuine and natural audience engagement. Sing-alongs were common throughout the show, and actors often stepped out into the house.

“We devoted many of our resources to covering the audience,” said Goldman. “The wash fixtures on the balcony rail picked up characters when they entered the audience area. We also had fixtures on FOH truss to wash the crowd in texture, hit the mirror ball, and provide other specials as needed. Our wonderful front light operator, Tracey Isabell, handled the many pickups in the house and some tricky ones on stage as well!”

Also coming in for praise from Goldman were Paul Bradley, who helped flesh out the light plot while he was in Kenya, and Rachel Fraley, the associate ME. “This was really a team effort,” said Goldman. “Also, if it wasn’t already obvious, I’m grateful to the staff of the New Victory whose goal is to educate young audiences and bring them to the joy that is theater. I’d also like to thank the Nairobi team of Claudia Lloyd and Sheba Hirst (producers), as well as the production team of Wamai (SM) and Kibugi (audio), who shepherded this show from Kenya with skill and aplomb.”

For his part, Goldman looks back on Tinga Tinga Tales with the enthusiasm of a young audience member. “Occasionally I can be a cynical person,” he said. “But seeing the audiences filled with children on both continents watching with unbridled wonder at all the animals asking them to sing with them while they learned Swahili and English was a theatrical experience that I will always cherish.” 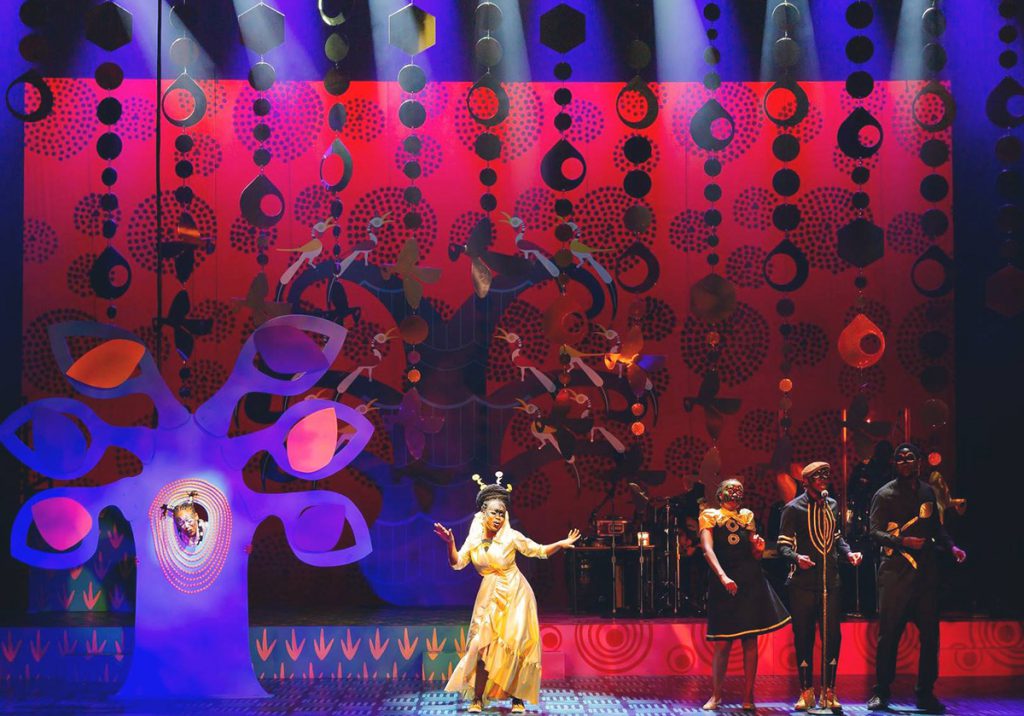